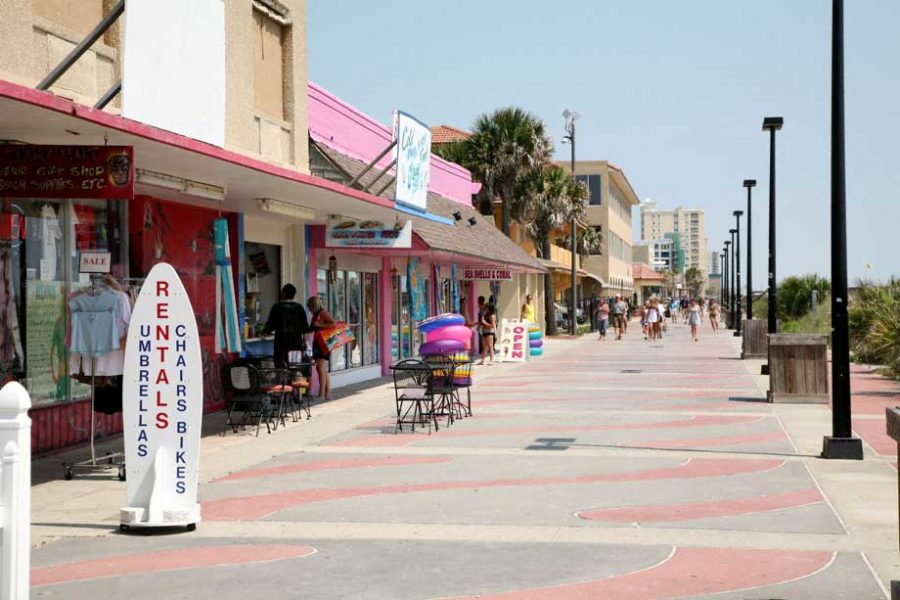 The boardwalk of Jacksonville Beach. Photo courtesy of Inside Florida.

Mayor Charlie Latham of Jacksonville Beach has proposed closing certain restaurants at midnight in order to curb what he calls “drunken anarchy.” Latham shared with the Spinnaker that “the restaurants shift gears and become bars [after midnight], effectively doubling the amount of bars in the area.”

The restaurants in question are in what’s known as the “Central Business District” of Jax Beach. The CBD encompasses an area from Beach Blvd. to Eighth Ave. N., and from Fourth St. to the ocean. According to Latham, a total of 11 restaurants hold a 4COP-SRX, or a special restaurant license, which gives them the ability to sell liquor so long as they are also selling food.

In other words, the proposal would not affect the hours of establishments that have a 4COP or a full liquor license—only the restaurants that serve under the special license.

“All pushback [to the proposal] has been from bar owners and patrons, and not from residents,” Latham told the Spinnaker. “I have been riding with the Chief of Police since I became mayor and, after the Fourth of July, I sat down with Chief [Patrick] Dooley to discuss the problem and potential solutions.”

He also said that they try to keep an officer on each corner of the CBD during weekends. According to Latham, the number of police officers in the area has doubled from six to 13, but the issues have continued.

Georgette Dumont, Jax Beach City Council candidate and UNF Associate Professor of Political Science and Public Administration, spoke with the Spinnaker to share her opinions and concerns regarding the proposal.

“There are two big differences between the 4COP and the SRX,” she explained. “The 4COP full liquor license is very expensive, and the insurance that a business must have to hold that license is also very expensive.”

According to the Florida Division of Alcoholic Beverages and Tobacco, “for every increase in the population of a county by 7,500 residents, a new quota license is created. In order to obtain a quota (liquor) license, you must either buy an existing license or enter the quota drawing to win the right to apply for a quota license. The winner may then apply for the issuance of the new license.”

A 4COP license was recently listed at $480,000 but this doesn’t include the cost of the insurance required to hold it.

With regard to the revenue from sales taxes, Dumont clarified that “the state collects the sales tax and then funnels it to the counties based predominantly on the percentage of sales. It is the county that then divides it up between municipalities mainly based on population.”

When asked about residents of the beaches, she decidedly expressed how location may sway the customer-base.

“I don’t know many people who go downtown because of all the issues there. The younger residents who tend to rent and live in that downtown area like the options,” she said. “But the people who live in the neighborhoods with families, if they want to go out, they’ll go down to Ponte Vedra or the Town Center in Atlantic Beach.”

Liam Lynch, bar manager at Flask and Cannon in Jacksonville Beach, also shared his concerns with the proposal.

“I don’t think the people in the mayor’s circle are the people coming to the Jax Beach bars between the hours of midnight to 2 a.m. He may not feel that way, but I promise they exist, and they are plentiful,” he affirmed. “I think it would make things worse. Like I said, it would just force people to relocate. If we had to shut down at midnight and everyone that’s in here has to leave, they’re going to want to continue. The mayor, he’s not on our schedule.”

Regarding the potential dangers of closing at midnight, Lynch told the Spinnaker he believes leaving the restaurants open may actually be preferable.

“If anything, feeding people at the end of the night is much better than pounding back a few more drinks and trying to make their way home,” he said.

Another consideration is for the servers who make their living on tips. If the proposal is enacted and 11 restaurants start to close at midnight, then there would be 11 less potential places to serve, thus cutting down on the money servers may earn at the end of the night.

The Spinnaker is currently awaiting the results of a records request to determine which specific restaurants will be affected.

A public workshop will be held on Wednesday, August 8 at 6 p.m. in Jax Beach’s City Hall to discuss the proposal.