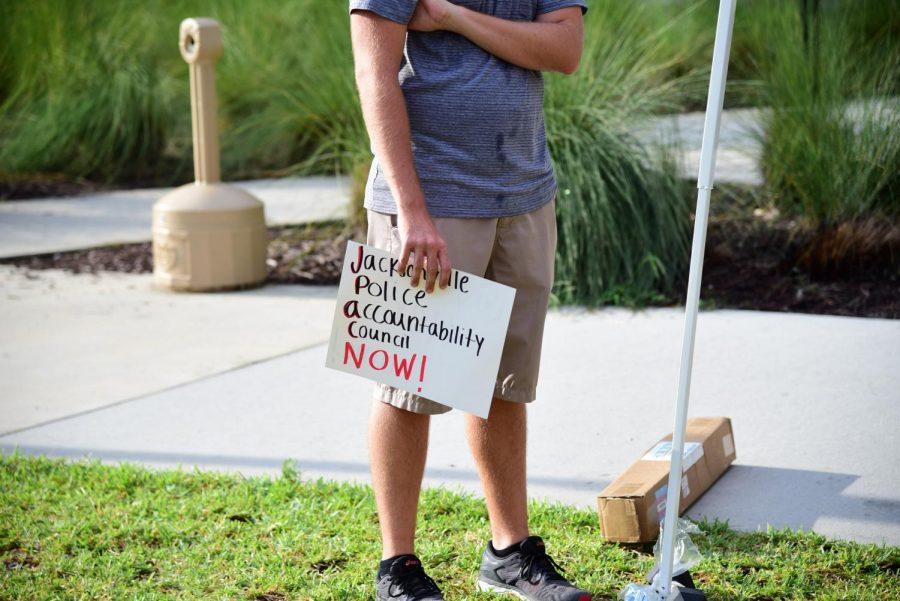 An activist holds a sign calling for police accountability.

JSO created the liaison team in response to the murders of three Jacksonville transgender women since the beginning of this year. The investigations are still open and active, but Sheriff Williams said there was no evidence linking the murders.

UNF graduate and liaison team member Sargeant Harvey Baker IV said that the primary purpose of the nine-officer team is to act as a means of communication to the LGBTQ community and to “reassure people that investigations are going right, when they are.”

But some of the LGBTQ advocates and allies present were not satisfied by the creation of the team. Many of them expressed outrage over the Sheriff’s Office’s misgendering of murder victims and general mistreatment of transgender people by the police.

“Sheriff Mike Williams, I want to ask you and your liaison team, why haven’t you guys apologized to the transgender community for misgendering us in media?” asked Founder Paige Mahogany Parks of the Transgender Awareness Project.

One commenter, who did not identify herself, led a group of over 20 attendees, including Parks, out of the auditorium at the event.

While some speakers appreciated the chance to weigh in on the creation of the liaison team, the general attitude was tense. Most of the forum participants used their three allotted minutes to admonish the JSO and recount their own negative experiences with police.