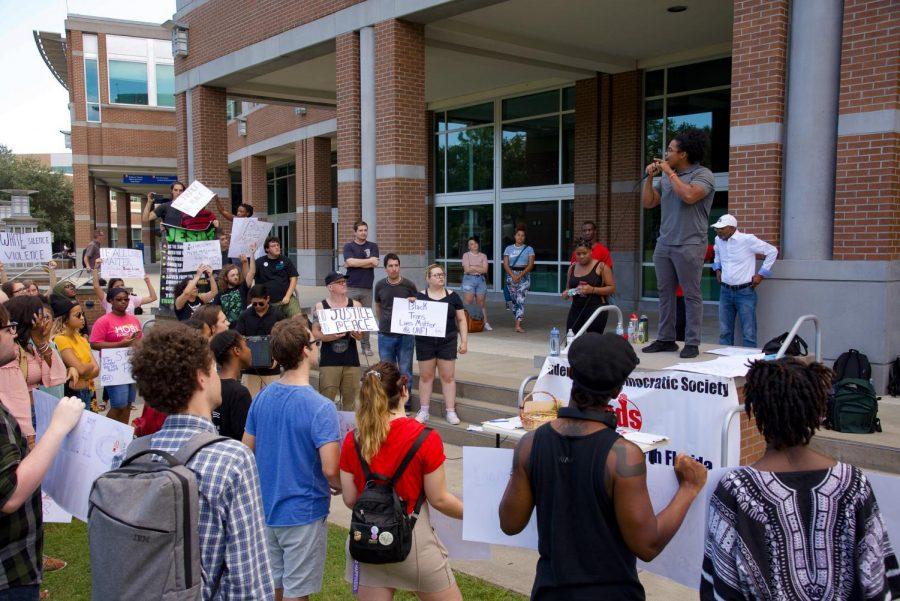 Students gathered on the Green on Wednesday, Sept. 26 for a Black Lives Matter rally hosted by the Students for a Democratic Society. The event was hosted as a means of standing against social and racial injustice and police brutality.

Signs with phrases stating, “Pro-Black does not mean Anti-White,” “Stand Up Fight Back” and “No Justice, No Peace” were provided by the SDS and handed out to those attending the rally.

“People are going to notice that we do care and we’re trying to fight for our black and brown students,” Tionna Seabrook, a sociology major, said. “We want to make it a safer place for them and let them know that they have solidarity here.”

“I support the efforts of students to organize and express themselves peacefully on issues that concern the community,” Sociology Professor and SDS Faculty Advisor, David Jaffee, told the Spinnaker.

Like last year’s BLM rally, speeches were given by members of the SDS and the Black Student Union, which were intertwined with a variety of chants to promote their message of standing up to racial injustices and police brutality.

During Seabrook’s speech, a counterprotester appeared and proceeded to yell at the group of people.

“A counterprotestor was behaving in such a way to try and disrupt the BLM protest,” UNF Police Chief Frank Mackesy said after the event. “Once the behavior was detected by police and deemed inappropriate he was removed from the area.”

According to Jaffee, the counterprotestors were to be expected.

“Anytime you organize a protest for a political purpose, there will be people with a different opinion,” Jaffee said.

This rally gave SDS students the opportunity to talk about their future events, including a lecture and discussion with Alex Vitale, the author of “The End of Policing,” on Oct. 18 at the Herbert University Center.

“I’m hoping we can have a serious discussion about how we can use a resource in our community. Not for more police, but to strengthen the communities where the issues and the problems exist,” Jaffee affirmed. “And to empower those communities instead of servile them.”