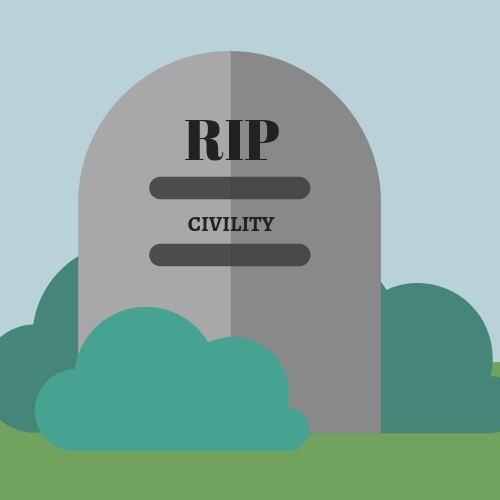 From the beginning of the 2016 election up to this current moment, there has been a loss of civility in political discourse. Gone are the days of reasoned debate, bipartisanship and commitment to country over party. The politicians say mean things and the untamed hordes come out and yell at each other in the streets. What happened to kindness? Where have our values gone? Our precious norms! A chorus of pocket protectors sing out, “Have you no decency, sir!”

America has finally rid itself of the curse of civility that has infested its brain since the nation was founded by backward aristocrats in the 18th century. Yes, politicians said mean things before now (former presidents Nixon and LBJ are notably obscene), but this era is different. Our president, Donald Trump, a reality TV character and admitted rapist, watches cable news for eight hours a day and probably lacks object permanence. This man sits in the highest political office in America. Suddenly, the prestige of the office has been demystified. All those norms, our nation’s values, and civility itself have been revealed as an absolute crock. Over 300 million people just realized you can have a lizard brain and become president as long as you have a lot of money and are on television enough. So much for the city on a hill.

The death of this illusion has wide-reaching implications, but first, there is this matter of civility. Civility is the most important value to people who don’t have the risk of losing everything when they visit a hospital. It’s the nice facade on the front of the slaughterhouse, the sheen on the sword, the thin line between folks on a dancefloor and St. Vitus’s Dance. You may look up a definition, but it’s pointless. Civility has no meaning other than obscuring the violence inherent in politics. The greatest accomplishments of civility are terms such as humanitarian intervention, enhanced interrogation, and stop-and-frisk—all nice ways to say war, torture and racially-targeted policing. The value of civility is its usefulness to the ruling class to mask their intentions. It’s the code that allows them to punch down without those below punching up.

Civility is weaponized by both the Democrats and Republicans. Throughout the 2016 election, Hillary Clinton continually harped on Trump’s status as a mean guy, someone who didn’t respect norms, and someone outside the political establishment—a strategy that panned out quite poorly. It was quite obvious to everyone outside of The New York Times and Washington D.C. that the Clinton’s are loathsome figures, synonymous with the elitist ruling class. Hillary Clinton appealed to America’s respect of norms and civility, and the answer was a resounding no. She may have won the popular vote, but feel free to try and find a significant population of people who felt proud voting for her that aren’t employed by a newspaper or the Democratic party. The Clinton campaign was based on civility and it was a failure. None of them saw the writing on the wall at the time. Clinton has now said that “you can’t be civil with a party that wants to destroy what you stand for.” What a great message that would have been back in 2016.

Now in the Trump era, Republicans have become the lovers of civility. The number one rallying cry for those standing behind Kavanaugh was that the opposition was acting uncivil towards him. Their arguments boiled down to a central belief to those that love civility: Brett Kavanaugh had to fulfill his “destiny.” Kavanaugh was essentially designed to be a Supreme Court judge by elite private education institutions such as Georgetown Prep (which Supreme Court Justice Gorsuch also attended) and Yale. His life is entirely divorced from anything resembling the average reality of anyone in America, as is the truth with most of those that make up all of the highest political offices. Thus, Christine Blasey Ford’s accusations of sexual assault were an affront to the sense of entitlement people like Kavanaugh feel towards positions of power. The Democrat’s opposition to Kavanaugh’s nomination (which was pathetically weak) was accused of being uncivil because they brought up Dr. Ford’s accusations. This is what civility is used for. How dare a woman accuse someone entitled to be a justice? Civility demands someone as pampered as Kavanaugh be crowned to whatever position he wants, no matter what violence has happened behind the scenes. The American aristocracy doesn’t have to follow the same rules as the rabble.

The mask of civility has slipped off, and now there is nothing hiding the ugly reality of politics. For centuries, civility has been the guise hiding the relentless assault on working people from those insulated from reality. There is nothing left to hide behind now. The ruling class has already felt the effects. Protesters occupy their offices, harass them out of restaurants, and shut down the freeways. The most important thing is that they no longer feel safe—a privilege the elite have always had over the rest of us. Ruining a dinner is hardly justice for the number of lives ruined by the ruling class, but if it makes them feel like the walls are closing in on them, then it’s worth it. Flood their phone lines, ruin their dinners, occupy their offices, stand on the steps of their institutions and outside their palaces. Hound and harry them at every turn. Civility is dead, but politics is more alive than ever.