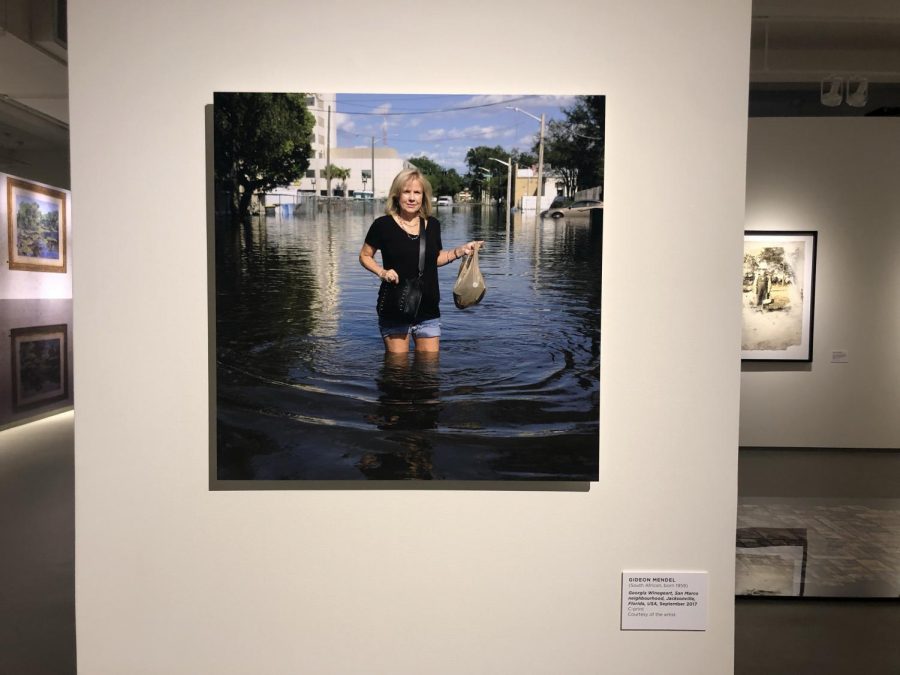 “People are viewing science through the lens of their own ideology and that’s where we run into dead ends,” said UNF Political Science Professor Josh Gellers.

UNF hosted a “Climate and People: How Will Our Communities Survive?” panel discussion, Thursday night at the Museum of Contemporary Art. The discussion was in conjunction with the “Gideon Mendel: Drowning World” exhibit, which captured the essence of struggles experienced by victims of climate change.

The panelists included History Professor Charles Closmann, Gellers, Biology Associate Professor Kelly Smith and Biology Assistant Professor Adam Rosenblatt. They shared their personal reactions to the problems closely associated with drastic environmental shifts and the impacts that it leaves on communities in the U.S. and across the globe.

“The combination of political leadership and perception of a tangible problem – a dramatic event – has encouraged, at least in this country, people to support environmental legislation,” said Closmann in reference to the Dust Bowl in 1935.  Dust that blew from Kansas, Oklahoma and Texas as a result of the Dust Bowl, blew all the way to Washington D.C. and encouraged legislators to put in place environmental policies.

Similarly, data recently presented during the panel discussion emphasized the need to worry about increasing temperatures in Duval county due to climate change. The data predicted that by 2080, Duval County would be experiencing 120 days of unevenly distributed temperatures above 95 degrees.

“The impacts on our economy, the impacts on human health are going to be catastrophic. People can’t work outside if it’s 95 degrees. And this is temperature without humidity,” Rosenblatt stressed.

Smith then went on to add other challenges that would come into play once temperatures rise, including an increase in blue-green algae, which can withstand extreme temperatures, becoming more common in our rivers.

But just hearing about the effects of climate change on the human population wasn’t enough, and Gideon Mendel’s art exhibit reinforced the detrimental consequences of extreme climatic shifts. The exhibit displayed everything from still photos of people in their flooded homes, family photos, and live videos of people entering their homes where the water was waist-high.

The exhibit showed catastrophe through a personal lens by showcasing photos of homeowners attempting to clean through the damage.

So why is this important and what can we do?

Although photos were taken around the world, a handful of them were from San Marco, a historic community in Jacksonville, reinforcing that climate change is in our own backyards.

“What I want to build is community engagement. I want to build student engagement and the more we can have students participating in things relating to helping protect our coastline, helping reduce the risks, I think the better off we are. It’s not just lecturing them during a classroom setting, it’s literally getting them dirty,” said Smith as she showed pictures of attempts by UNF students and faculty trying to rebuild shorelines by using oyster shells donated by local restaurants as an alternative to cement seawalls.

The human right to life was also discussed among the panel as Gellers talked about the importance of looking at distribution, participation and recognition when it comes to environmental justice.

“Our sense of equity and  fairness about how societies are run, says something about the values that are instilled in our society and how we implement the decisions that we make,” said Gellers as he discussed the importance of listening to developing communities and their needs in order to achieve their own kind of environmental justice.

Supporting local businesses that have lower carbon footprints and paying attention to what businesses are taking part in creating a cleaner environment for everyone, are small things students can do to help alleviate the effects of climate change.

“There are a lot of big businesses that realize that climate change is going to impact their bottom line and that they need to pressure policymakers or deal with it on their own,” said Rosenblatt. “One thing we can all do is figure out which businesses are doing that and support them with our own purchasing power and then remove our purchasing power from businesses that are not taking part in this initiative.”