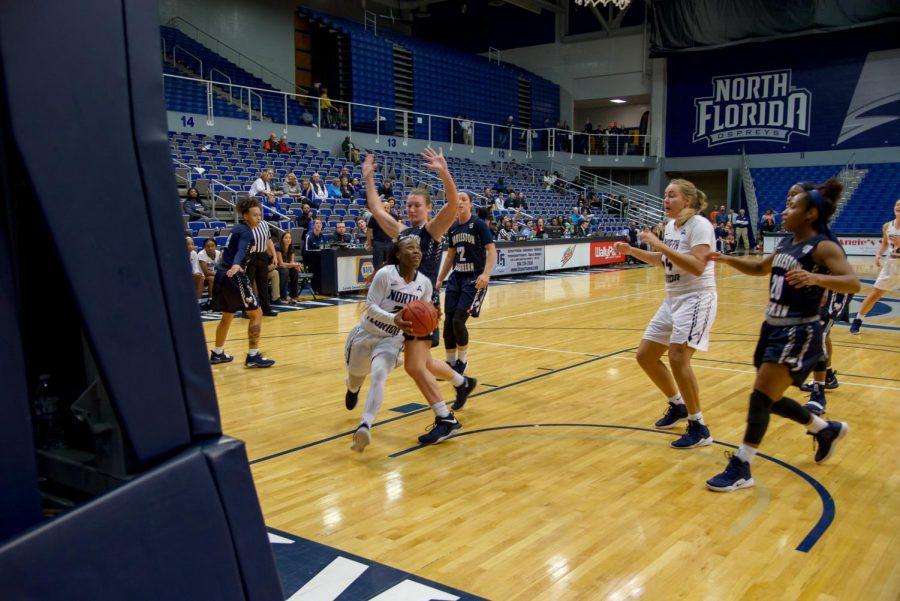 The UNF Women’s Basketball team survived a hard fought back and forth game to defeat the FIU Lady Panthers 62-53 Tuesday night at home.  After a slow start, not scoring until late in the first quarter, the Ospreys made a 10-point run to take control of the game in the second quarter.

“I think it was the turnovers..we didn’t have the ball long enough to get into a rhythm offensively,” Gibbs said.

Junior Janesha Green made the first field goal for the (4-3) Ospreys with 52 seconds remaining in the first quarter as she buried a three pointer. Green carried the team back from the deficit that grew to 14 points by adding seven more points in the second quarter.

Finally, the seesaw game was put away when Senior Arianna Emanuel-Wright took over down the stretch, scoring 10 points in addition to five more from Green.

Emanuel-Wright snuffed out any hope of the Panthers stealing the win when she took a charge with 45 seconds remaining, 62-53, Ospreys.

Green led the team in points with 15 and tied for the lead in rebounds with eight.

The Ospreys head an hour south on Saturday, Dec. 15 when they take on Bethune Cookman on the road at 3 p.m.