This week in sports: All about basketball 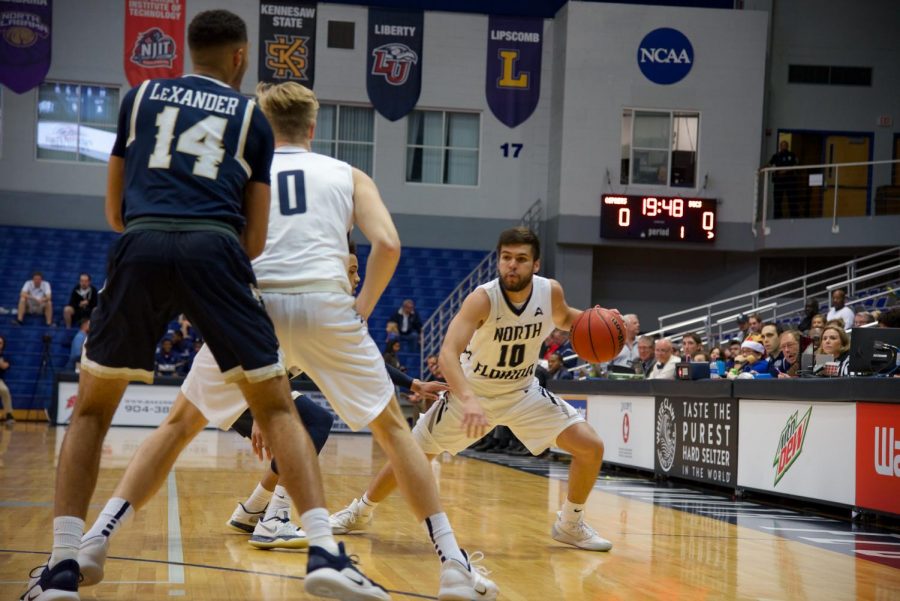 After a tough three game stretch last week, over which the Ospreys Men’s Basketball team lost two of three games over a grueling road trip, the men returned home and finished strong with a win over Charleston Southern.  The Osprey Women’s Basketball team split home and away games with a home game against FIU (62-53 win) and a 60-76 loss at Bethune-Cookman.

The Men play only once this week, Wednesday night at number 11 ranked Florida State University. The Seminoles (8-1), lead the ACC and should provide a stiff test for the Ospreys.  The Seminoles’ only loss came at the hands of defending champion Villanova. The Ospreys will need a complete defensive effort to earn a victory.  The Seminoles are balanced with their top seven scorers between six and twelve points per game. They shoot well as a team, making 45.2 percent from the field, 76 percent from the free throw line, and 35.5 percent from three.

UNF (5-7, first in the ASUN conference), will need a huge game from leading scorer Junior Noah Horchler (15.9 points per game), in order to pull off an upset in a hostile environment.  They will also likely need a big game from Junior Wajid Aminu (13 points and 10 rebounds) against Charleston Southern.

The UNF Women’s team (4-4) play back to back home games on December 20 and 21 against Alabama A&M and Warner.  The Alabama A&M Lady Bulldogs enter the game 3-6 on the season. They are a team that the Ospreys can take advantage of.  They give up 65 points per game and are -9.2 points per game in scoring margin. As a team, the Lady Bulldogs shoot poorly from the field (36 percent) and from three (22 percent).  Their opponents shoot better than they do in every category (FG, 3FG, FT).

In the second of a back to back, the Warner Royals visit.  Warner (5-9) on the season, enters on a seven-game losing streak.  The Ospreys look to continue that streak. Warner has not won a road game and UNF has not lost at home.

Senior Arianna Emanuel-Wright and Junior Jazz Bond will be the marquee players during those two games. Emanuel-Wright leads the team in points per game (11.6) and is explosive on both sides of the court. Bond, the USF transfer, will be playing her second game for the Ospreys after sitting out for the past year due to NCAA Transfer rules. Bond is 6-4 and shoots well from long range, scoring 16 points and grabbing nine rebounds in the game against Bethune-Cookman.

Both women’s games will tip off at 2 p.m.