Gender as a cultural construct: The modern spectrum and stereotypes 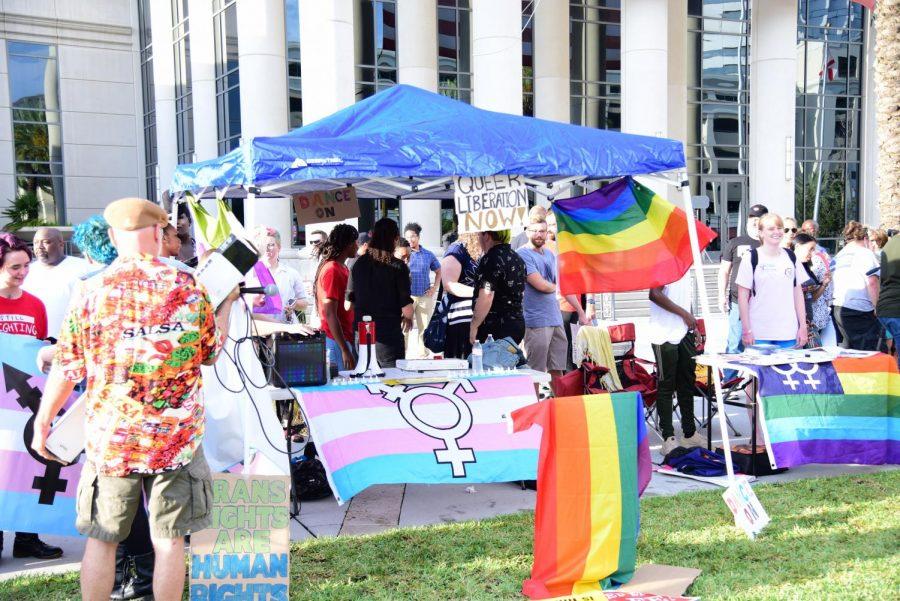 Activists gather outside of the Duval County Courthouse in response to the recent death of transgender community members.

So, are you a girl or a boy? And how do you know for sure that’s what you are? Have you always known?

The American Academy of Pediatrics has reported that, “by age four, most children have a stable sense of their gender identity.” However, as time and society have grown to recognize the malleability of general self-expression, so too has there been a greater breakdown of gender identities, expressions and stereotypes.

That is, one’s self-identified gender may be subject to change with time and growth. But what exactly does this mean, especially in a world where many argue that biology determines one’s sex and gender?

To start, sex and gender are often used synonymously, though the two terms are in fact not one in the same. That is, when people refer to a person’s gender as determined by biology, they are actually referring to sex. Gender, however, is a more nuanced and personal identity based on social and cultural stigmas of masculine and feminine traits. Moreover, such traits are usually subject to change and are usually derived from a person’s assigned sex at birth.

According to Gender Spectrum, a website dedicated to creating a gender sensitive and inclusive environment for all children and teens, the dimensions of gender are generally determined by a person’s understanding of their own body, internal sense/experience of the self, and expression thereof. The interrelation of these traits, when felt to be in harmony with one another, ultimately results in a person’s overall gender identity.

While most people refer to gender as being encompassed by only male or female, otherwise known as the “gender binary,” UNF LGBT Resource Center Director Kaitlin Legg told Spinnaker that gender is, in fact, a spectrum.

“We have gender identity, which is who we deeply know ourselves to be: as a man, as a woman, as something in between or neither,” Legg explained. “So, different kinds of gender identity can be male/man, female/woman, but we also have non-binary people, who either see themselves as outside of that male/female binary, we have third gender or bigender people, agender, and then also, of course, we have to think about the transgender umbrella.”

That being said, the ardent belief that gender only exists as a traditional binary can be especially harmful—not only in one’s journey of expression, but also in terms of one’s self-discovery. As gender is commonly dictated by a culture’s societal standards, so too will stereotypes be inherent, making it difficult for a person to feel as though they’re allowed to express themself in ways that society deems to be non-traditional. Sometimes, this is where gender expression can come into play.

“We have gender expression, which is the outward expression of ourselves in relation to our gender [identity]. There’s our own self-perception of when we wake up in the morning and if we’re going to put makeup on or do our hair a certain way, if we’re going to wear a dress or pants. And then there are also parts of ourselves that we don’t make choices about, like how our faces are structured, what our body looks like, so there’s all of that,” Legg told the Spinnaker. “So, besides our self-perception, there’s also the perception that others have of us based off of our culture. So, a person sort of looks at our body and our expression and sort of makes a split-second decision about us: who we are, what our sexual orientation might be, how we’re supposed to be treated, if we’re a potential romantic partner, even.”

Usually, stereotypes are based off these culturally-constructed concepts of gender expression.

For example, according to Planned Parenthood, there are four basic kinds of gender stereotypes:

Personality traits: Stereotypes may express women as being more emotional and men as more aggressive.

Domestic behaviors: Traditionally, women have been expected to be the the one to cook and clean the household, whereas men are the working breadwinners.

Occupations: Often falling in line with personality stereotypes, women may be stereotyped as taking up “caretaker” positions such as being nurses or teachers, where men are seen as more commanding in business or leadership roles.

Physical appearance: The stereotype of physical appearance is twofold. For one, women are typically expected to be smaller and more “graceful” than men, who are expected to be larger and more muscular. Additionally, there are expectations regarding how one dresses; women wear makeup and dresses, and men do not wear makeup and wear shorts or pants.

Where the line is more blurred in some aspects of gender stereotypes, others are upheld more rigidly, and a person may face significant backlash for daring to indulge in a trait not typical of their gender. For example, over time it has become common—if not expected—for women to wear pants or trousers. However, it is generally considered odd or unacceptable for men to wear dresses or skirts unless they are in drag or doing so for comedic purposes.

However, the cultural roles that people abide by in accordance to their gender may not appear the same across the board or in all locations.

“Gender in Florida or in the South might sometimes look different in the North,” Legg said. “It can also vary between different cultures in terms of race and ethnicity, as well as our huge melting pot of folks who have immigrated or moved here from different countries. There’s just so much there.”

In all, if somebody does not understand another’s gender identity, or if someone is unsure of what their own identity and expression might be, Legg encourages one simple action: