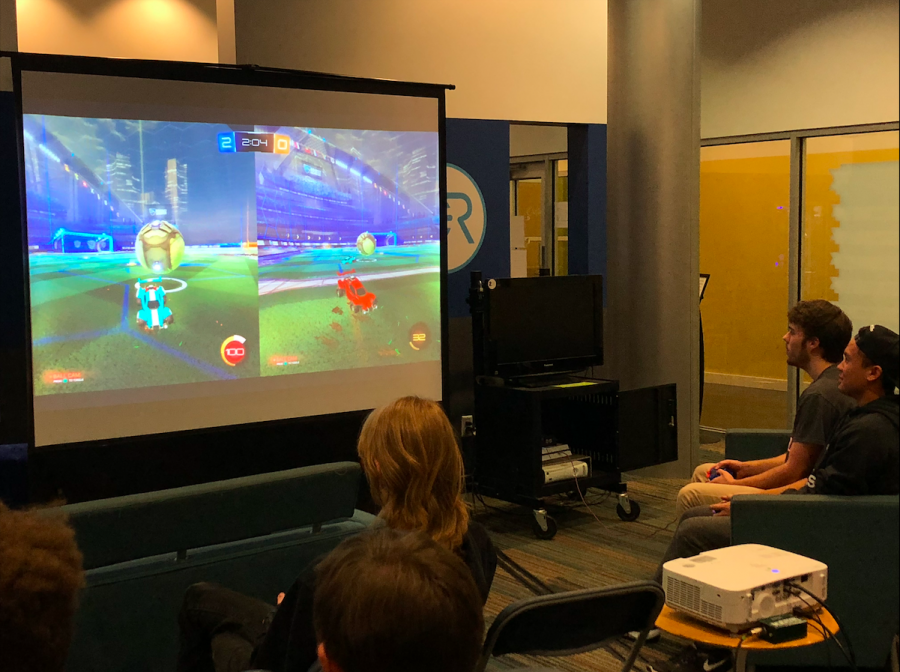 Students gathered in the Game Room to play Rocket League.

I know what you’re thinking: nerds are just a bunch of socially awkward, goofy-looking guys that smell like sweat when you walk by them because they haven’t showered in three days from all the hardcore gaming they have been doing. But not at the University of North Florida! I got the chance to interview a few people around campus about the overall nerd community and from what I have heard, we have a great community here!

Thythy Bui, who works at the UNF Game Room, says that the nerd community here is very diverse. We have individuals who are really into console and PC gaming, active pool players, and anime and manga junkies.

Within the gaming community, there are different communities as well. There are gamers who strictly play sports games like FIFA ‘18, Madden Football and NBA 2K. Then, there is the fighting game community, who play games like Super Smash Brothers, Marvel vs. Capcom, Overwatch and Dragon Ball Z. For PC gamers, games such as League of Legends and Smite will always be popular.

“The popularity of games changes every few months,” Bui said. “Over the summer months, FIFA ‘18 was by the far the most popular game. With the World Cup being one of the bigger sport events this summer, it’s understandable why FIFA ’18 was so popular.”

Bui then said that the popular game during the spring semester was Dragon Ball Fighter Z. The Game Room also holds a few tournaments a semester for games like Super Smash Bros. and League of Legends.

Austin Cunillera, who is one of the students in charge of the Esports Club here at UNF, agrees that the nerd community here is very diverse, albeit in different ways. The Esports Club comes together on campus to play and promote different games in order to meet new people and socialize with other gamers at school.

“There is other interests other than gaming for nerds at UNF, many active gamers do other activities, including playing sports like tennis in their free time. Everyone comes from a different walk of life, too,” Cunillera said.

Many people come to the Game Room just to play pool or play board games. Some board games that are popular around UNF and the Esports Club are strategy games like Axis vs. Allies, Settlers of Catan, Munchkin, and Dungeons and Dragons. Roger Catangui, President of the UNF anime Club, said that there is a big and healthy community on campus.  Nerds and gamers come to the Game Room to spend their free time socializing and enjoying a game or two in between classes. Games like Super Smash Brothers for the Wii U are a perfect reason: the eight player smash game mode brings everyone together just to have a good time with some friendly competition. As president of the Anime Club, Catangui is in charge of setting up events on campus and trying to bring in new members for the club. Every Tuesday at 7:30 p.m.,  the Anime Club watches a few episodes of an anime show or  movie in the Student Union.

“It’s just a way for students to relax and have a good time,” Cantangui said.

Every week in their Facebook group, members make suggestions and vote on what they want to see, with the top two picks be the show or movie they’ll watch for the upcoming week. The top animes on UNF’s campus are “Jojo’s Bizzare Adventure” and “My Hero: Academia.”

The end result is clear: all students need to check out the Game Room to see what it offers. There are so many clubs and opportunities available in that room that it would be absurd not to take advantage of this opportunity.