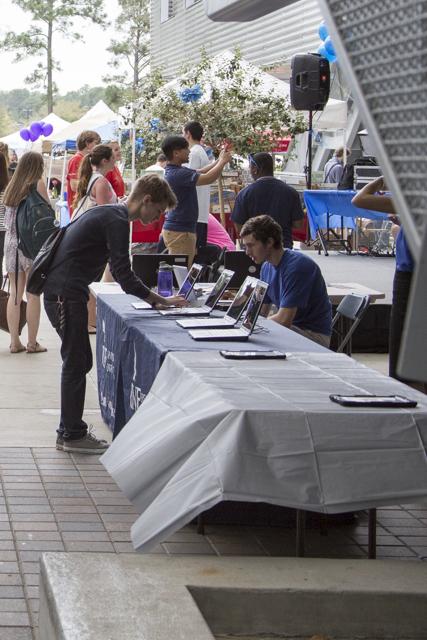 Students have until Wednesday at 6 p.m. to vote for Student Government. Photo by Morgan Purvis

This past Wednesday marked the official start of election season at UNF. With new parties entering the race and candidates hoping to become the next student body president, it was both an important and momentous day.

This election season will see candidates from the Forward Party, Frontier Party and Pink Party. Marisa Materazzi, one of the founders of the Pink Party, the newest party addition to UNF, stated that her party’s main job is to work for the students and update the campus. Some of the initiatives she hopes to see implemented included more chargers at the tables in Starbucks, more funding and counselors for the Counseling Center, and updated food and restaurants available on campus.

Lee Tomlins, representative of the Frontier Party declined an interview at Market Day and would only answer questions in a prepared interview.

Matilda Phan represented the Forward Party. Some of their initiatives include a new Student Involvement Center, more study spaces, and a mobile Osprey1 Card app.

After talking to the parties and hearing what they had to say and hope for in a candidate, Spinnaker spoke to Elections Commissioner Lawrence Dutton. Agreeing that this was the busiest and most exciting part of the year for him, he mentioned that his favorite part of the job was working with the parties and candidates to get the students involved and have more of a voice in their student body representatives.

Students will be able to meet and talk with the new candidates Wednesday, Feb. 20 at Market Day. Elections will take place on March 5 and 6.