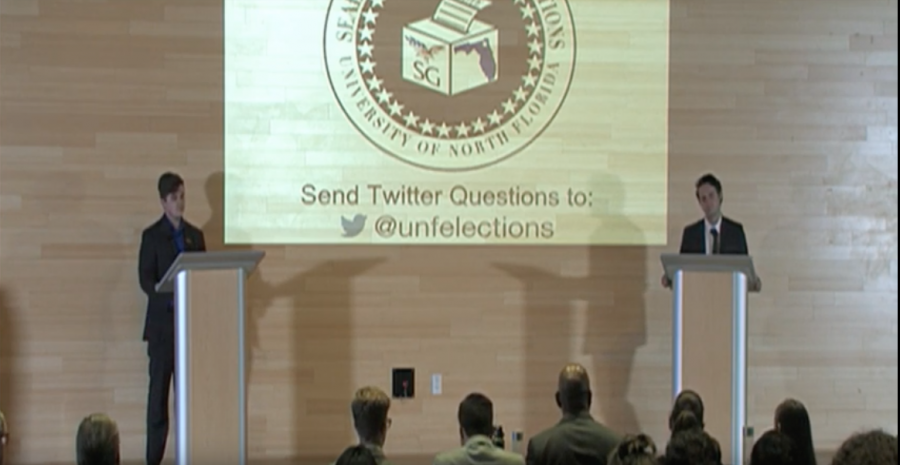 The Student Government Debate was a chance for presidential candidates Lee Tomlins and John Aloszka to get up and personal to sway their audience. It proved to be a night of insights and surprises.

The candidates rehashed their initiatives and the core values of their party, and students had the opportunity to learn about how candidates would implement their plans to improve the university.

The debate was composed of two parts. The first section was designated for SG elections questions. After a ten-minute break, the second section was for student questions.

Between Aloszka and Tomlins, here’s a crucial view of UNF’s future Body President.

While the candidates agreed on the theme of student involvement, their opinions differed on a wide range of issues. Concerning leadership, Aloszka recognizes himself as “very intense, very serious,” and thinks that he’s developed into a conscientious leader. In the same capacity, Tomlins thinks of himself as having a laissez-faire style of leadership, convinced he’ll bring on a qualified staff.

The topic of student voter turnout reared its head again, so when it comes to SG involvement, both candidates had an answer. Tomlins thinks Student Government should focus on syllabus week and form relationships with freshmen before classes begin. He noted that students learn about Student Government by coming to market days and visiting the SG offices.

While Aloszka addressed this idea with Forward’s Student Involvement Center initiative, he also believes it’s important to venture outside the campus to address the higher powers. He disagreed with Tomlins’ comment that Student Government should mainly focus on student involvement.

“We don’t live in a bubble. We respond to not only the Board of Trustees but the Board of Governors and the state government. That’s how we get our funding. So I’m qualified to be Student Body President because I’ve requested over $30,000 successfully from the Senate to fund initiatives and programs, and I’ve worked with Florida Student Association to get not only get off-campus medical amnesty on our agenda but successfully advocate for it at the capital.”

Because Tomlins served in the Judicial branch, he admitted that Chief Justice and President are “completely separate jobs with separate responsibilities,” and he believes he has the blessing of president’s past.

“Two prior presidents have trained me. They’ve given me pointers, they’ve [the Red party] given me advice from notebooks, and I thank them.”

The contrasts between the parties sharpened in response to two topics: planning for UNF’s leadership changes and preachers on campus.

While the face of UNF changes with a new President and Provost, Aloszka believes he should address those changes by forming new relationships, having good standings with new leaders, and appointing responsible SG advocates. Tomlins didn’t see the change as affecting the office of Student Government because his own new offices would be coming in with the new UNF administration and adapt.

Concerning preachers on campus, Tomlins took a stand as a supporter of the First Amendment, and while he believes in limits, that preachers should be allowed to speak in public areas and not class rooms, he believes that anyone has freedom of speech on campus. Aloszka disagreed, believing that it’s an issue of harassment instead of free speech. He hopes to speak with state departments to make sure students feel comfortable on campus.

The debate’s end resonated with Tomlins’ thankfulness for all of the support he’s received and Aloszka’s call to action.