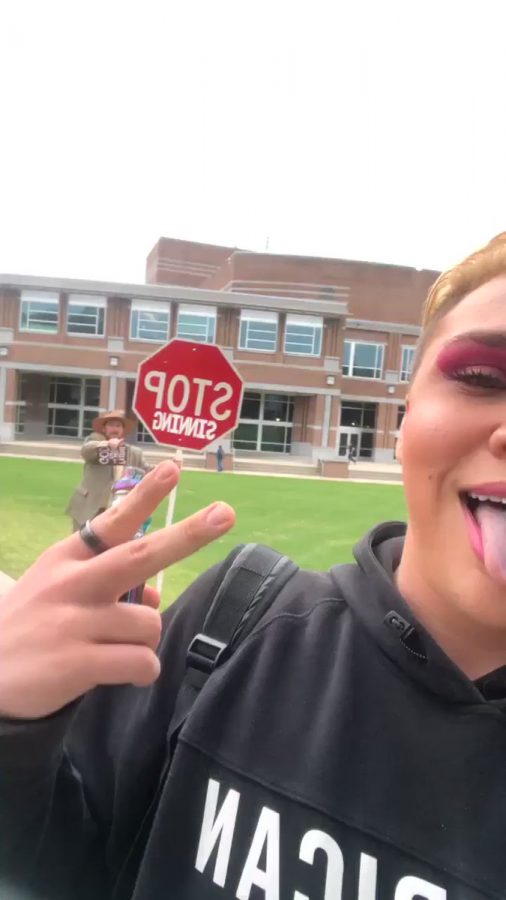 According to Urban Dictionary, having a “gaydar” means having the ability and gift of being able to detect homosexualty in other people. This term was used Feb. 13 by a male preacher on the Green towards UNF student Zeph Kane as he was on his way to grab lunch after class. You may have seen Kane’s viral Snapchat video that was posted on Twitter of the man clearly disrespecting and targeting Kane.

Initially, I saw Kane’s video retweeted on my timeline from someone I followed. After watching it a handful of times and laughing, there was no doubt in my mind I knew this video was going to blow up the Twitter World. The video was just at two retweets and a few favorites, it currently has 48.8 thousand retweets, 183 thousand favorites and a total of 2.6 million views.

@UofNorthFlorida replied to Kane’s video and said, “As a public university, everyone is entitled to a freedom of speech and freedom of religion on campus. If you are threatened by members of this organization, any other group or individual, please contact the UPD.” I direct messaged Kane and asked if we could go for coffee and chat about his experience.

Me: How did the situation even begin?

Kane: I had just gotten out of class and was on the way to Panda Express. He honestly just started antagonizing me, I was automatically targeted. The first thing yelled to me was that his gaydar was going off, that was when I started recording. He also said, “I remember a time when only clowns wore purple lipstick.” I basically recorded it, smiled, then walked away.

Me: Did you expect your video to go viral?

Kane: Absolutely not, it started off as a Snapchat video. My friend was the one who told me to put it on Twitter, so I did. I was playing video games and was just counting the retweets and thought it was crazy. I have people who follow me on Instagram and Snapchat now. A couple guys on campus complimented me as their favorite meme. At first it was UNF students retweeting it. That sparked many questions from other users as to why UNF allows this on campus. It almost felt like @UofNorthFlorida was defending him, when I really was the victim. I feel like they could’ve at least direct messaged me, apologizing or something. Their tweet back to me didn’t make me feel any better or safer.

Me: How do you feel about free speech on The Green?

Kane: Well in order for my rights to be protected, their rights have to be protected. I know that if I wanted to say something out there, I could. Politically too, if there was an agenda that I wanted to push I would want my rights protected as well. A while ago, UNF did try to have regulations where you could have free speech by having “free speech zones.” You used to have to have a waiver to do free speech on campus. Turning in documents, scheduling a time, a lot of regulations. Martin Luther King, what if he had to have regulations like these? Would he have gone as viral as he did? Made that much of an impact? What if I wanted to say something? I wouldn’t want to be regulated.

Me: Was it offensive, or just funny?

Kane: Being an open gay male, I’m used to this type of exposure. There are people who have died for my rights and fought for my rights. So I’m going to continue being who I am, continue to smile and happily wear my rainbow flag on my backpack around campus.