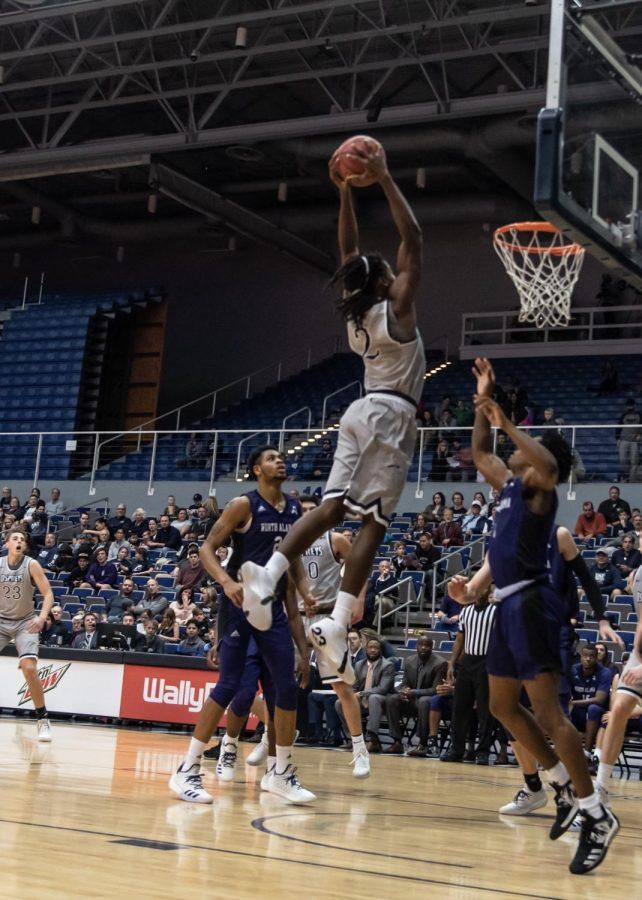 Double-Doubles from Juniors Garrett Sams and Wajid Aminu fueled UNF in a 76-66 win in the first round of the ASUN Men’s Basketball Conference Tournament over North Alabama.

Junior Garrett Sams scored the first points of the game on a trey from the left wing. Freshman Carter Hendricksen handled the glass well early in the game, controlling the boards.  The Ospreys and Lions continued to battle as both teams traded leads. UNF’s long-range shooting was impressive halfway through the first half, UNF was 4-5 for three-pointers.

The Ospreys trailed 29-27 to the Lions with 1:21 left in the first half after Junior Ivan Gandia-Rosa nailed two key free throws.  Sams nailed a three with 45 seconds left from deep to give the Ospreys a 30-29 lead to go into the second half.

The Lions began to creep up after Freshman Jamari Blackmon hit a three-pointer that helped put the Lions behind one, 47-46 UNF. A pair of three-pointers from Sophomore Ryan Burkhardt pushed the lead to 53-48 with 9:55 left in the second half. With six minutes left, Redshirt-Junior J.T. Escobar nailed a three from up top to give UNF it’s biggest lead of the game, 59-51 UNF. In order to finish strong and win the game, the Ospreys had to take care of the ball and prevent the Lions from going on a run.

Senior Kendall Stafford’s mid-range layup pulled the Lions within five and Smith’s free throw had the Lions only trailing, 63-59 with 2:30 left. Aminu’s layup added a 65-59 cushion for the Ospreys with two minutes left to help set the momentum on the Ospreys side until Freshman Christian Agnew drew a foul, making one of his two free throws to pull within five.

Gandia-Rosa scored on a layup with 1:14 left as the Ospreys led, 67-60. The Lions were grabbing more offensive rebounds with a differential of 13 but couldn’t capitalize as they lost, 76-66.

Sams led the squad with 18 points and 10 rebounds and Aminu put up 10 points while grabbing 14 rebounds.

After only scoring four in the first half, Gandia-Rosa found ways to open up his offense with 10 points in the second half.

“In the second half, I tried to make sure that I slowed down and that opened up scoring for me. I just try to find everybody else,” Gandia-Rosa said.

Freshman Jamari Blackmon led the Lions with 15 points in the loss.

The Ospreys head to Lynchburg, Virginia to take on Liberty in the second round of the ASUN Men’s Basketball Conference Tournament on Thursday, March 7 at 7 p.m.