Sams’ standout performance not enough in loss to Flames 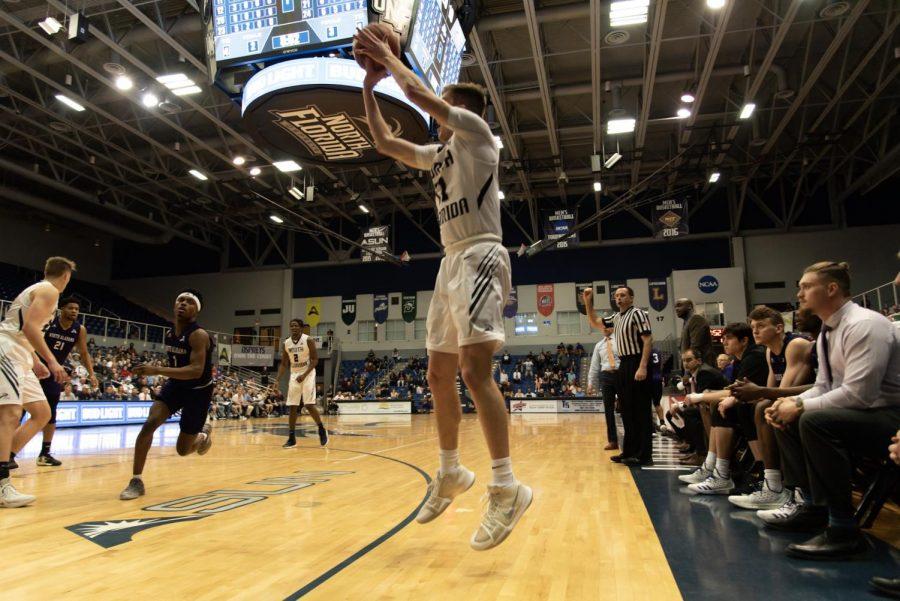 The Ospreys and Flames clashed in a heavyweight bout in the ASUN Semifinals but Liberty came out with a 71-63 win, ending the Ospreys season.

The Flames jumped out to a 7-2 lead early on a three-pointer by Sophomore Elijah Cuffee. It was a struggle for the Ospreys to get offensive rebounds as the Flames bullied them on the glass.

Freshman Carter Hendricksen hit a three-pointer to pull the Ospreys within three as the Flames led, 8-5, four minutes into the first half. Junior Wajid Aminu came alive later in the half as he collected six points, including a monster dunk. Both teams continued to battle for the lead in a game of “anything you can do, I can do better”.

The Ospreys grabbed a 22-19 lead on another Hendricksen three with nine minutes left in the half. The Flames began using active hands in their defense and continued corralling more rebounds off the Ospreys missed shots. After a three from Senior Lovell Cabill Jr. and a layup from Senior Keenan Gumbs, the Flames led 28-22 with 3:51 left in the first half. Redshirt-Junior J.T. Escobar made it a three point game after he hit a trey with three minutes left in the half as the Flames led, 30-27.

Liberty edged out at the end of the first half with a 35-30 lead. Redshirt-Junior Scottie James led the Flames offense with 12 points and five rebounds. The Ospreys were hot from the three point line, recording a 42 percent clip, including a trio of those from Hendricksen.

Junior Garrett Sams fired the first shot of the second half on a three in the left wing to cut the deficit to 35-33. The Flames continued their interior work and extended their lead to seven points until Junior Ivan Gandia-Rosa pulled up for a three-pointer to put them down three with 15:14 left in the second half, 44-41 Liberty.

The Flames began heating up and grabbed an eight point lead on a three by Cuffee for a 51-43 score with 12:43 left in the second half. The Ospreys continued to have the mamba mentality as they stayed within striking distance of the Flames. With 8:07 left in the second half, Escobar fired a three from the right corner to put the Ospreys down three, 53-50 Flames.

Shortly after, Sams connected on a three of his own to put the Ospreys down two with 6:48 left in the game. The Flames kept answering with plays inside to keep their lead. With less than five minutes left in the game, the Flames led, 59-55.

A three from Redshirt-Junior Caleb Homesley gave the Flames a 62-55 lead with 4:04 left in the game. After reaching within five with 1:23 left in the game, it was too little too late for the Ospreys in a 71-63 loss.

The Ospreys finish with a record of 16-17 (9-8 ASUN) after winning seven of their last eight games.

The Flames advance to the ASUN Championship game on Sunday, March 10 at 3 p.m. against the winner of the other ASUN Semifinal game between NJIT and Lipscomb.