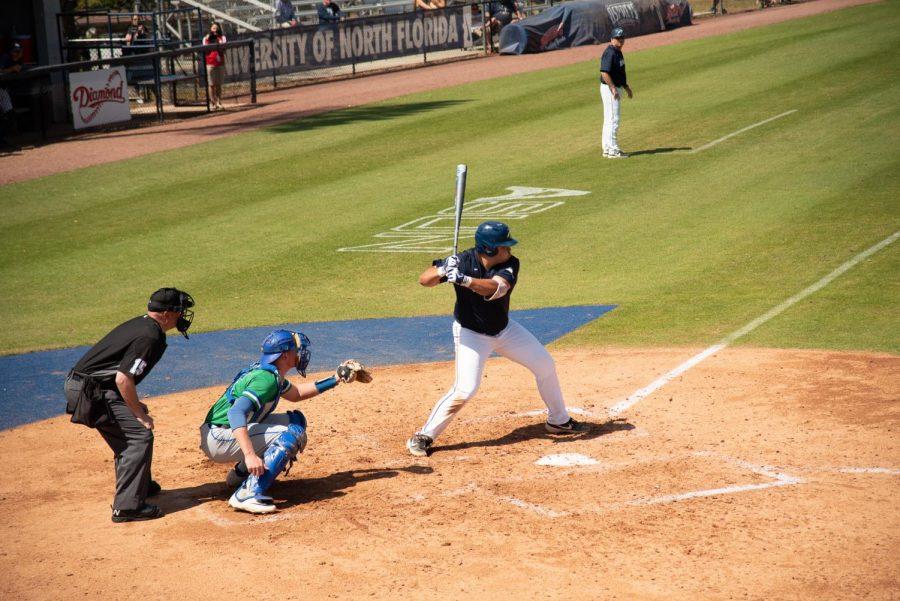 In a back and forth battle between UNF and Stetson, the Ospreys emerged victorious with Junior David Maberry leading the charge with four RBI’s.

Maberry got the offense going early with an RBI single to left in the first inning for a 1-0 UNF lead.

Junior Jorge Arenas tied the game at one after an RBI single to center in the first and Junior Andrew MacNeil later scored on a fielder’s choice in the for a 2-1 Hatters lead at the end of the first.

The Ospreys roared back in the third as RBI singles from Juniors Tanner Murphy and Maberry put the Ospreys up, 4-2.

Senior Chris Berry helped the Ospreys tack on another run in the fifth on an RBI triple to left for a 5-2 lead.

Maberry plated two on an RBI single to left as the doors were blown wide open for a 7-2 lead.

A bases-loaded-walk in the sixth followed by a pair of RBI doubles in the seventh had the Hatters on the cusp of tying the game at seven but couldn’t capitalize in a 7-6 UNF win.

Before game two of the series, UNF had already clinched a spot in the ASUN Baseball Championship Tournament.

The Hatters and Ospreys play a rubber match for their final regular season game on Saturday, May 18 at 1 p.m.