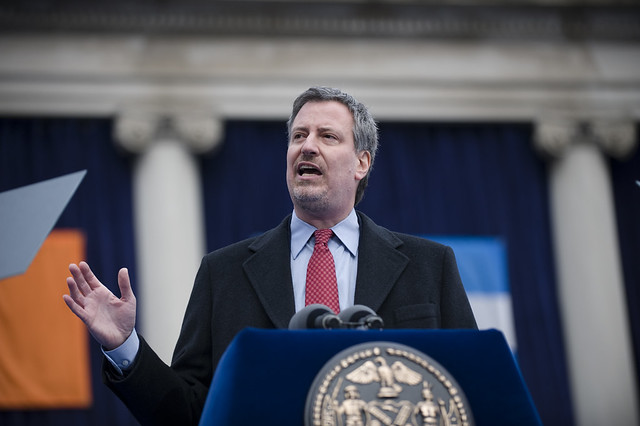 Fun Fact: Bill de Blasio’s birth name is Warren Wilheim Jr. He legally changed his name to Warren de Blasio-Wilheim because of his father’s absence in his life. He shortened it to Bill de Blasio in 2001.

Bill de Blasio is the 23rd Democratic candidate to throw his hat in the ring. If elected, de Blasio promises to serve working people by taking on big corporations and the wealthy, which he claims to have already done in New York City. As a progressive, de Blasio is concerned with income inequality, education, immigration and criminal justice.

In New York City, he has raised the minimum wage to $15/hour, created a universal pre-kindergarten program and supported the creation of city ID cards to protect immigrants and grant them access to city programs. As Mayor and presidential candidate, de Blasio supports the Green New Deal, a millionaire’s tax and free health care for all. He also supports a woman’s right to choose and LGBTQ healthcare. One distinctive difference which sets him apart from other democratic hopefuls: Bill de Blasio criticized NAFTA and the Trans Pacific Partnership.