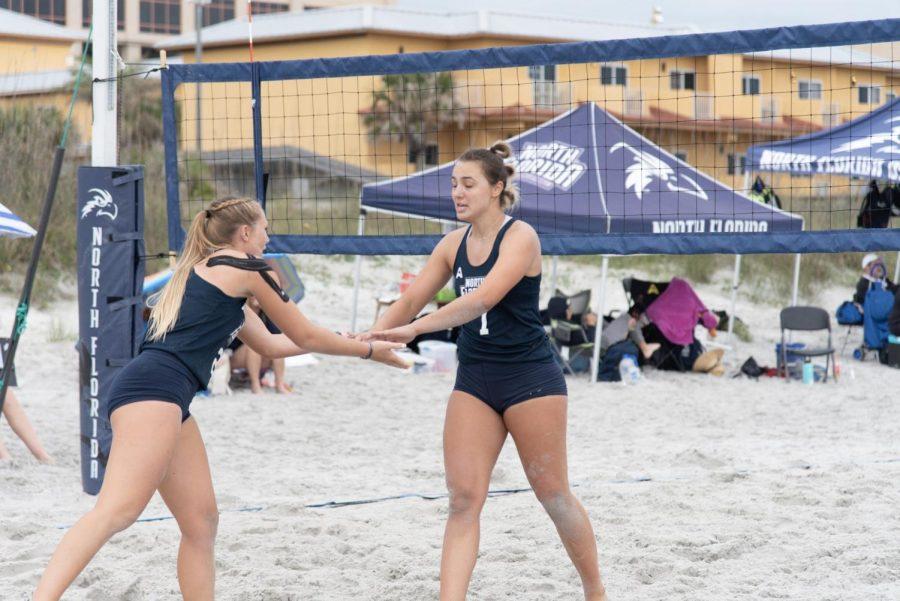 It takes two to make a thing go right and the UNF Beach Volleyball pair of Dana Roskic and Callie Workman were the classic one-two punch this past season, going 24-9.

“I feel like we gave a lot to each other. Some partnerships, you’ll see someone takes and someone gives and that’s when you clash. I think we both really enjoyed each other and really loved each other so I think that helped a lot with our chemistry on the court,” Workman said.

After reaching the semifinals last season against Stetson, Roskic reflected on the team’s performance.

“I think that everyone was just kind of understood their role and understood that this is what we need to do to win,” Roskic said.

Once her Sophomore season ended, Workman was invited to the Women’s Collegiate National Team Training Program this summer.

“It was amazing, all of the girls out there wer incredible. Definitely going forward in my career, there are definitely some girls I can call up and be like ‘hey, do you want to play in this tournament and that tournament?’. The training was insane, one of the coaches there played in the Olympics, I believe in 2008 so getting to hear his take on different techniques was really nice just because a lot of coaches have different styles,” Workman said.

At the program, Workman learned some new skills that she can implement in her own game.

“Some of the stuff that I learned there were a lot of two-ball optioning, I didn’t do that much this season because Dana was really good at it so I would usually set her up to do that. I learned how to do a few new cool tricks that I’ll be trying out. I definitely got better at a lot of different skills,” Workman said.

Roskic and her partner Jasmine Safar took home Silver this summer at the Ontario Championships.

“It was kind of incredible considering that we were playing adults so we’re competing against people that are five to ten years older than us on the national team. We came in two 19-year-olds and we made it to the finals and honestly that whole experience was insane because we got to compare our skills to others and see where we need to be and what we need to work on to get there. It helped us develop as a pair,” Roskic said.

This will be Roskic’s Sophomore year at UNF and she has learned plenty in her Freshman year that will stick with her for the upcoming season and in the classroom.

“I would say just always giving my all and always making sure that I’m 100 percent in everything I do whether it’s in school or Volleyball,” Roskic said.

The energy of the two is infectious and they even have their own rituals before a game.

“Before every game, we’d run up to the net holding hands,” Roskic said.