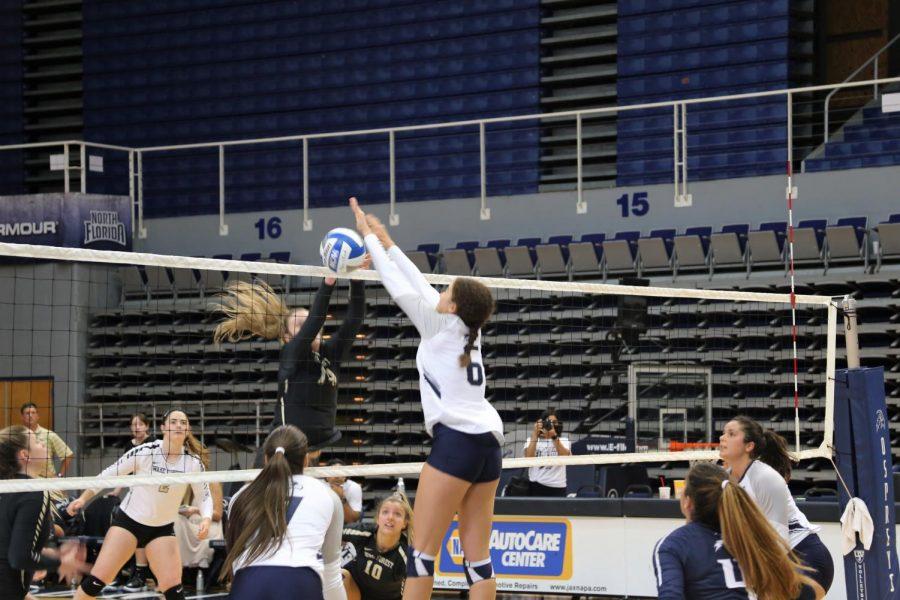 Despite losing to ECU and Wake Forest, Julianna Askew and Gabby O’Connell had stellar performances in day one of the UNF Invitational

The Pirates got an early 3-0 lead in the first set until three unanswered points by the Ospreys tied it at three including a service ace from Julianna Askew. At the first timeout, ECU led 16-11 with the team recording a .421 attack  percentage. The Pirates lead extended to 19-14 later on, fueled by Sydney Hall with five kills.ECU went on to win the first set, 25-17. Hall led the Pirates with six kills.

The Ospreys tied it up at five on an attack error by Natalie Tyson and UNF continued that momentum to regain a 7-6 lead on a kill that was spiked by Solimar Cestero. The Ospreys stretched their lead to 19-14 on an attack error by Natalie Tyson. The Pirates tried to close in as they were only down 22-18 at the third timeout. ECU reached within one on a service ace by Kleinman as the Ospreys were up, 24-23. The Ospreys eventually prevailed with a 25-23 win in the third set.

The Ospreys and Pirates traded leads early on as the momentum was swinging like a pendulum.As the first timeout hit, the Pirates led, 17-14. Each team battled as it was tied at twenty. A key kill by Taryn Griffey tied it up at 23. After the Pirates tried to win by two with a 25-24 lead, Griffey hindered their plans with a spike to keep the team’s hope alive. Unfortunately, two unanswered points by ECU led to a 27-25 win.

“I think we won the serve and pass game, we started out a little better than them which we’re normally pretty good at, even in pre-season. I felt like we were just calmer and we started ahead versus the other sets when we’ve had to chase them a little bit,” Coach Wright said.

Askew recorded 42 assists throughout all four sets, more than anyone else in the match.

O’Connell and Griffey combined for 24 kills.

“All my teammates were really encouraging me all the time and at first,  I was really nervous because I am a Freshman and I was starting as a five-one,” Askew said.

The Demon Deacons grabbed an early 3-0 lead to start the first set. The Ospreys tied it up at six on a kill by Griffey and gained a 7-6 lead with O’Connell kill.

Wake Forest tied it up at nine and the lead was short-lived as Cestero spiked one for the 10-9 lead.The Ospreys extended  their largest lead of set, 21-16.

At the second timeout, the Ospreys led, 23-18, with an impressive .406 hitting percentage

Wake Forest woke up in the second set and led 4-1 early. The Ospreys tied it up at five on an attack error by the Demon Deacons.UNF found a groove and scored three unanswered points for a 19-16 lead, recording a .533 attack percentage.

The Demon Deacons started out the fourth set 4-1 as UNF called an early timeout to take a new approach.

Down 8-1, the Ospreys clawed within four as the Demon Deacons led 13-9.

“I was really proud of our team, we obviously are not satisfied with the loss.That’s disappointing, especially with how played in sets one and two. We did a really good job on our scouting report and executing our gameplan. I think we showed some promise in what we’re building,” Wright said.

O’Connell led the team with 20 kills on the night.

“I think our defense was really good tonight and then Julianna set really smart today. She saw where the block was and that really freed me up and I think our middles did a great job transitioning and that leaves me on one on one,” O’Connell said.

The Ospreys play Mercer on Saturday, September 7 at 2 p.m.