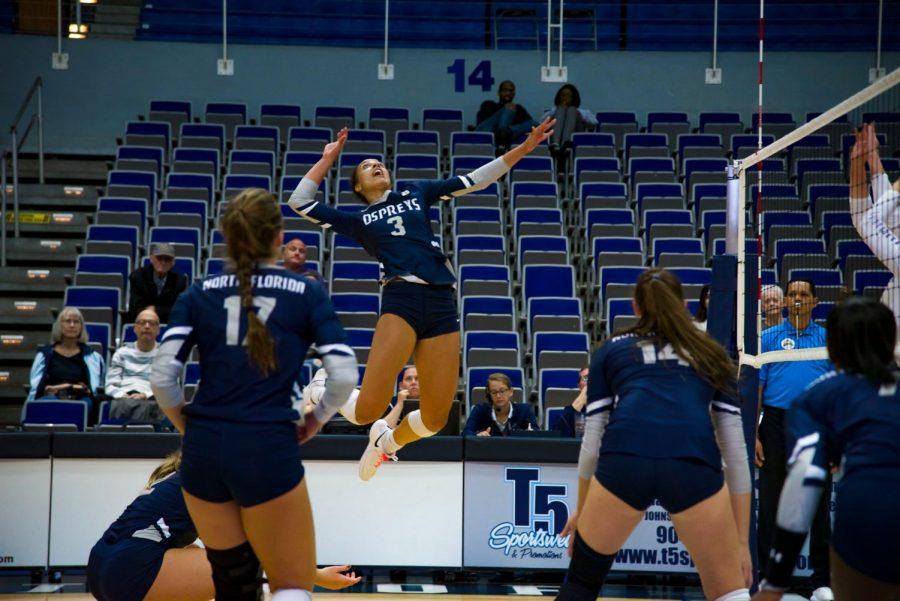 A streak was ended, a team took a set against a power five member, and another finished runner-up in the tournament this past weekend for UNF Athletics. 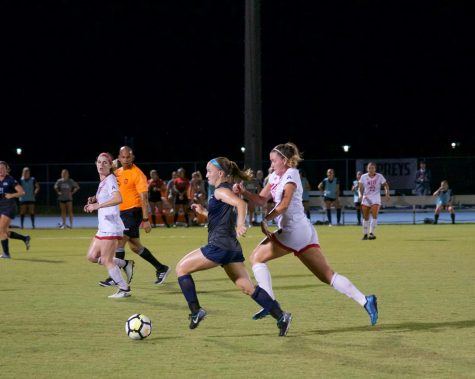 McKenzie Meisler races down the field. Photo by Khorri Newton

There are many notable streaks in sports, Joe DiMaggio’s 56-game hitting streak, Goldberg’s 173-match winning streak in WCW, and UNF Women’s Soccer’s four-game winning streak which was the best start in the program’s Division One history.

Earlier this weekend, the Ospreys defeated FIU, 3-1 to set the winning streak at four. The Panthers got on the board first in the 57th minute on a goal by Laura Chavez but that was all the Panthers would see from the net. Leah Ferlin tied the game at one in the 63rd minute on a goal assisted by Sophia Thompson, and Kendra Hoffman shortly followed with a successful penalty kick in the 72nd minute for the 2-1 lead. Thais Rheiss put the final nail in the coffin with a goal in the 90th minute which was her sixth goal of her season, tying her season high from last season. The back line was solid, as they only allowed three shots from FIU to UNF’s 23.

On Sunday, the Ospreys’ streak snapped when they lost 2-1 to FAU. In the 40th minute, Emma Voigt scored her first goal of the season on an assist by Sara DeLucca to put the score at 1-0, UNF. Mary O’Hara of FAU then scored two unanswered goals in the 54th and 62nd minute to cement the 2-1 win. Goalkeeper Rhiannon Conelley had eight saves for UNF in the loss.

The Ospreys return to Jacksonville to take on Air Force on Sunday, September 15 at 1:00 p.m.

UNF Volleyball takes one of three in UNF Invitational

and Mercer this past weekend in the UNF Invitational.

Despite losing to ECU in four sets, Julianna Askew had a stellar performance setting up 42 assists in her first home college volleyball match. Gabby O’Connell also led the team in kills with 12.

In the match against Wake Forest of the ACC, the Ospreys took the first set, 25-19, as O’Connell and Taryn Griffey combined for 12 kills. The Demon Deacons ended up winning the next three sets to win the match.

The Ospreys ended the tournament on a high note as they defeated Mercer in three straight sets. The team collected 11 service aces and O’Connell spiked 16 kills.

UNF Volleyball heads to Tampa to take on USF on Tuesday, September 10 at 6:00 p.m.

The UNF Men’s Golf team captured runner-up after standout performances from three of three of their own.

The team’s next tournament is the Graeme McDowell Invitational in Birmingham, Alabama on Monday, September 23.