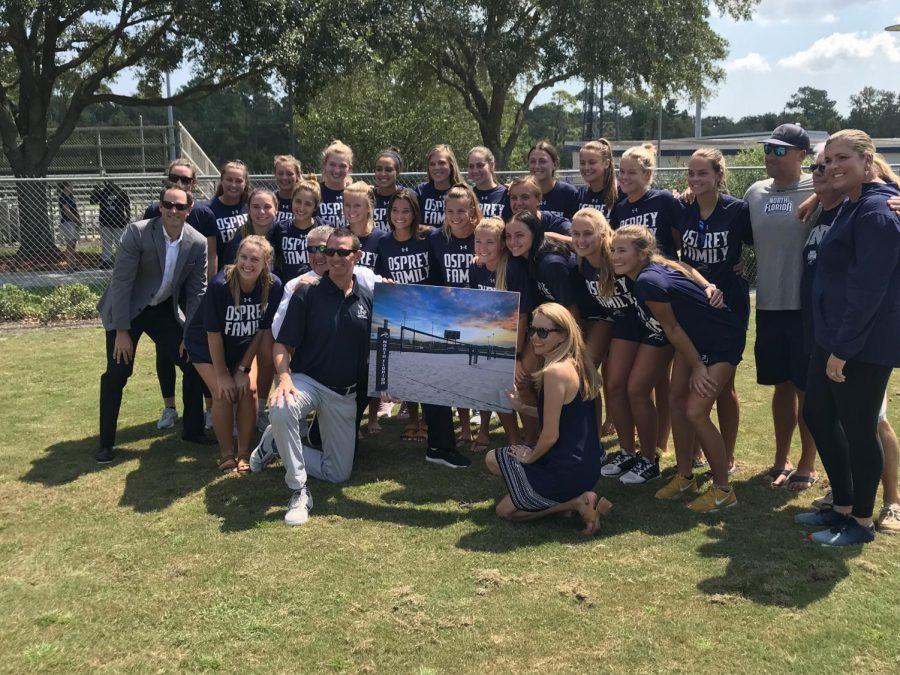 Senior Madilyn McCarty had tears of joy after hearing that UNF Beach Volleyball was getting a new complex on campus.

After McCarty read a letter aloud to the team and members of the UNF Athletics Department about why they need a new facility, UNF donor and alum Dwight Cooper surprised the team with news of a new complex being constructed on campus.

The Ospreys now have a home complex after a generous donation from donors Dwight and Christine Cooper’s “Cooper Family Foundation”.

“It’s going to create a sense of community. Right now, we practice somewhere that’s kind of not off campus, but we play off campus. When we play on campus, we’ll be able to have the people who live here and all these other people unite in one location,” McCarty said.

UNF Beach Volleyball Head Coach Kristen Wright will be entering her third season as head coach and mentioned her excitement about the new complex.

“Beach Volleyball is fun, it’s a spectator sport and we can’t wait for people to enjoy it with us,” Wright said.

The Cooper Beach Volleyball Complex or “The Coop” for short, “will feature five courts, a digital scoreboard, and bleachers that can seat a capacity of 300 people”, according to UNF Athletics.

The location of “The Coop” will be behind the right field wall of the UNF Softball Complex and will be on the right side of students when walking from Lot 18 to campus.

UNF Athletic Director Lee Moon discussed what the new complex on campus means for the program.

“It’s the next step, you always have to determine what we can do to invest. You have to have a place to practice and a place to compete on campus. This gives them an equal ground to recruit on which means that they can recruit on the highest level. We won’t have to take a back seat to anybody as far as having a quality facility,” Moon said.