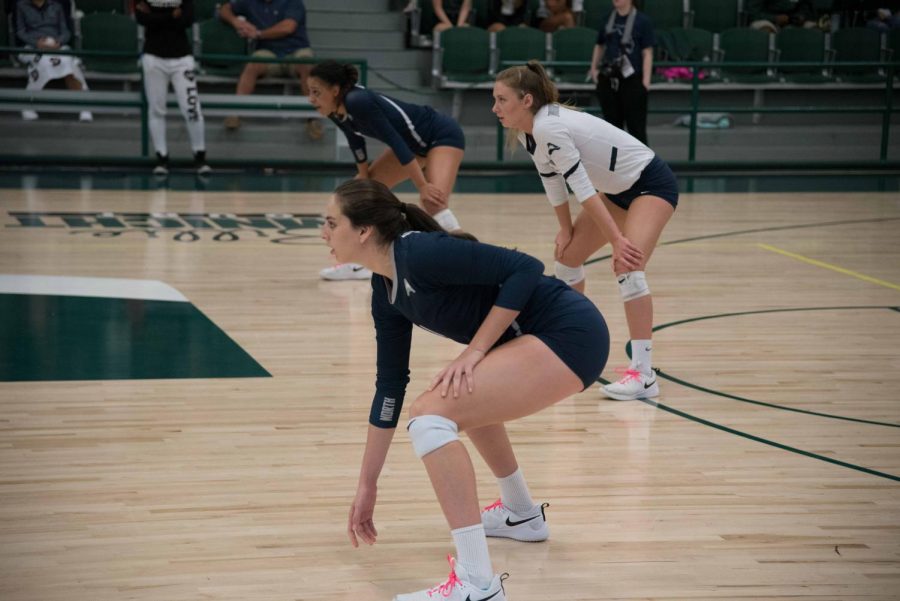 Sophomore Solimar Cestero prepares for the next serve

Despite record performances by Gabby O’Connell and Julianna Askew, the Ospreys committed 57 unforced errors in their loss to the Panthers.

The Panthers maintained a consistent lead early in the first set until the Ospreys crept back, only being down, 14-13. The Ospreys gained their first lead of the set on a kill by Solimar Cestero as they led, 16-15. From that point in the set, both teams traded points and were tied at 21 when FIU called a timeout. After the Ospreys scored three unanswered points, the Panthers followed with four unanswered points for a 25-24 lead. Since the Panthers had to win by two if the two sides are tied at 24, UNF earned a point to tie it at 25. A kill by Cestero cemented the Ospreys 27-25 win. Taryn Griffey finished the set with an .833 attack percentage.

An early 6-2 lead from the Panthers forced UNF to call a timeout and reassess. The Ospreys were cold on the attack as they recorded a .154 hitting percentage when they were down, 14-6. UNF could not come back in time and lost the second set, 25-17. O’Connell had nine kills throughout the first two sets.

The Ospreys came out of the break hot, leading 7-3 with a .429 attack percentage. While UNF was distancing themselves from the Panthers, the set was still moving back and forth. In crunch time, the Ospreys held a 23-21 lead and a pair of kills from Cestero late cemented the 25-22 win. The team recorded a .249 attack percentage in the third set.

The attack for UNF was off to a scorching hot start, executing on the first three kills they attempted. Despite the hot start, FIU regained a 10-9 lead. The Ospreys tied it at 17 on a block by Emma Dixon that forced an attack error for FIU. Both sides traded points late in the set which led to the Panthers regaining a 23-22 lead on an attacking error by Rocio Moro. Griffey followed with a kill to tie it at 23 and a pair of kills by O’Connell sealed the deal until FIU fired back to tie at 25. After FIU scored, O’Connell fired back with two consecutive kills to set up a 27-26 lead. The Panthers weren’t finished quite yet and they yet again tied it at 27. An attack error from O’Connell led to a 29-27 FIU win.

In the final set of the match between UNF and FIU, no team had an edge until the Panthers extended their lead to 9-5. The Ospreys came back and regained a 12-11 lead on a block by Julianna Askew. The Panthers tied it at 14 and the momentum began to seesaw throughout the fifth set. The Panthers eventually won the fifth set, 17-15, on a kill by Sidney Henderson.

Askew, who tied UNF’s Division One record for assists in a five-set match with 70, talked about the costly errors.

“It was definitely a battle, a lot of the push to the fifth set came from our errors and I think that if we focus on taking care of business on our side, we won’t have to push it to five sets,” Askew said.

O’Connell, who also tied UNF’s Division One record for kills in a five-set match with 29, talked about her performance in the five-set loss.

“I was kind of just swinging when I had an open block then if I didn’t, I would try to use their hands to really try to be aggressive and smart in every play,” O’Connell said.

UNF Volleyball Head Coach Kristen Wright discussed her main takeaways from the loss and what the team can do before their next match.

“We have 57 unforced errors to their 33, it’s that simple. Our skillset is there so we got to do some more pressure simulation and mental training in terms of showing up including tiring out,” Coach Wright said.

The Ospreys have a home match against Georgia Southern on Tuesday, September 17 at 6 p.m.