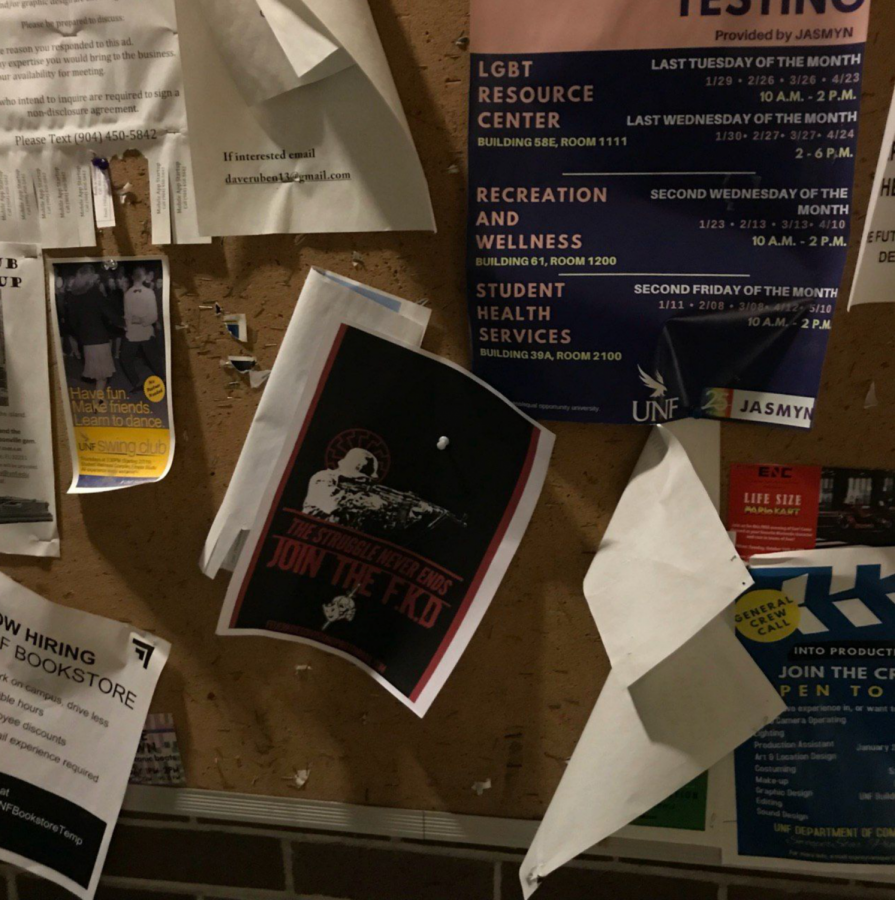 UNF has seen its fair share of hate groups on campus in the past and now reports and tips received by Spinnaker seem to point towards a well known hate group trying to make its presence known on campus: neo-Nazis.

Similar to Nazis, neo-Nazis are any post WWII movements working to resurrect Nazi ideology. According to multiple students, there has allegedly been an alarming neo-Nazi presence on campus in the form of promotional posters making inflammatory statements such as “Its Okay To Genocide Subhumans” and “The Struggle Never Ends. Join The F.K.D.” The F.K.D., meaning Feuerkrieg Division, “calls for violence against their perceived enemies” and destruction of “the system,” or society at large, which they believe is controlled by the Jews.

One student who requested to remain anonymous took a picture of the poster and posted it to Reddit, where it was shared online with other students. According to the student, they reported the poster to UPD. However, no police report was filed.

When Spinnaker reached out to the University, they released this statement:

“The UPD was recently made aware of at least one neo-Nazi flyer reported on the UNF campus. Efforts by UPD personnel to locate the flyer were unsuccessful.”

In addition, Spinnaker has received tips from another anonymous source who claims they saw posters around Chick-fil-A. “I made a report to UPD and they said the flyers were in the housing areas too,” said the anonymous student.

UPD neither confirmed nor denied this rumor when reached out to.

Spinnaker also received a strange email from someone calling themselves Subcomandante X, who claims to be a researcher following far-right extremism in the U.S. The individual sent links on the Telegram app (an app where you can send messages and exchange photos) where an international Neo-Nazi organization called Feuerkrieg Division (FKD) allegedly uploaded photos of its propaganda flyers on the UNF campus. In the photos, the organization’s flyers are posted next to other flyers pertaining to UNF. Some of them seem to be recruitment posters.

The University released this statement to Spinnaker regarding the flyers:

“University of North Florida wholeheartedly rejects hate in all its forms. The views expressed on this flyer are diametrically opposed to our commitments as a public university and as human beings. We remain extremely committed to providing a safe and inclusive environment on our campus, and welcoming all of our students, faculty, and staff regardless of race, ethnicity, faith, national origin, range of abilities, sexual orientation or gender identity.”

This isn’t the first time UNF has encountered an instance of neo-Nazism. In 2017, a former UNF student and former Grand Dragon of the KKK, posted a photo of himself with an AR-15 to Facebook. He was banned from campus after being charged with numerous Student Code of Conduct violations.

“The UPD is continually searching for offensive materials on campus as part of their daily patrols,” says the University.” “If you find anything like this, have any information about this case or have concerns related to it please call UPD at (904) 620-2800.”