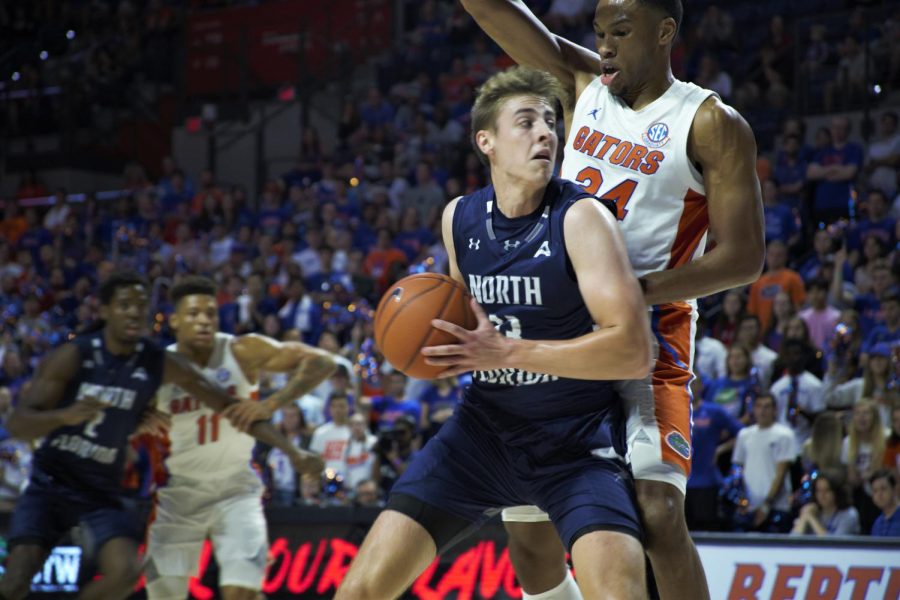 In a tough non-conference bout against the No. 6 Florida Gators, the Ospreys were outsized and struggled to defend against Kerry Blackshear, Jr. in a 74-59 loss.

Throughout the first half, the Gators woke up and began to distance themselves from the Ospreys, leading 39-22 at the half.

JT Escobar led the Ospreys in scoring with seven points.

Blackshear played well on both sides of the court in the first half, going 4-6 from the field to put up 11 for the Gators while grabbing four rebounds.

To open up the second half, the Gators stretched the lead to 45-22 with 18:45 left and the Ospreys began to chip away at the deficit.

The Birds of Trey lived true to their name as the team made 7-15 shots from deep throughout the second half.

Blackshear finished with a double-double for the Gators, scoring 20 and pulling down 10 rebounds. Escobar and Garrett Sams combined for 29 points for the Ospreys.

“It’s great that we outscored them in the second half and we shot 7-15 from three because that’s what we do when we’re really good at it but none of that stuff matters,” Coach Driscoll said. “To Mike White’s credit, they came out and punched us in the mouth in the second half.”

The Ospreys are now 0-1 to start the season and the Gators improve to 2-0.

The Birds of Trey return home to face Florida National on Thursday, November 7 at 7:00 p.m.