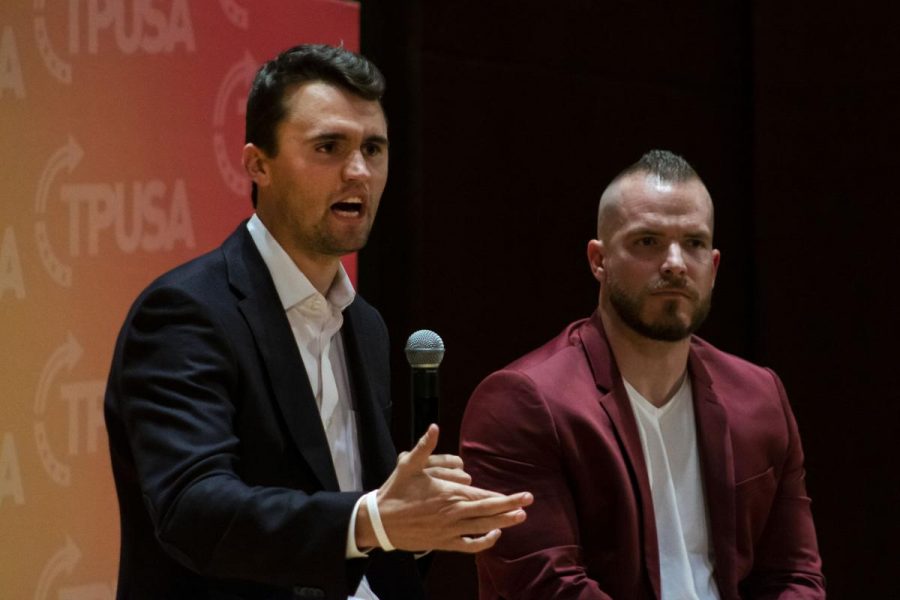 About 400 students and Gainesville residents attended the hour-long presentation, followed by a 30-minute Q&A session. While many applauded his values, protestors inside and out disagreed with his message.

Kirk is known for tweeting conspiracy theories and rhetoric widely viewed as inflammatory. Tuesday afternoon, hours before the event, he tweeted that Christine Blasey-Ford “made a fortune” after testifying against Supreme Court Justice Brett Kavanaugh, which is not true.

Protestors yelled back that all immigration should be banned.

Anthony Leonardi, the media director for UF’s Turning Point USA and a 22-year-old UF political science senior, said the protestors were white supremacists who are following the rhetoric of Nicholas Fuentes. Fuentes, a 21-year-old conservative, is famous for making YouTube videos for his “America First” brand.

“Their objective is that we have failed some sort of obligation to be conservative,” Leonardi said. “Turning Point is a fusionist organization that has values that it wants to stand up for.”

This isn’t the first time a conservative speaker has been heckled by the same group. Monday night at the University of California Los Angeles, Trump Jr. and Guilfoyle were booed during their stage event by Fuentes’ followers, according to the Washington Post.

Outside the auditorium, about 20 protestors from Gainesville Antifascists, Young Democratic Socialists of America at UF and UF Graduate Assistants United huddled under blankets in the 50-degree weather to picket the event.

The organization also printed out a large poster of Kirk’s head, filled his eyes out with a black marker and wrote “C**T” on his forehead.

Unlike Trump Jr., Kirk was not paid using student funds. Turning Point USA rented out the auditorium at a reduced rate, according to the University Auditorium Rental Policy Manual.

Although he can’t pick his No. 1, Kirk said that UF’s Turning Point chapter is one of his favorites.

Hope Dean contributed to this report.