Opinions: A place of hate 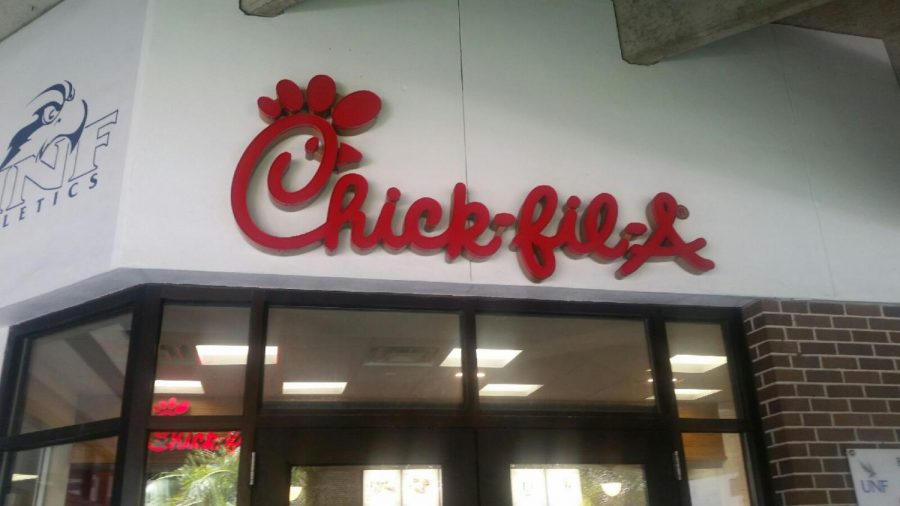 Of all the places to eat on campus, none tend to spark as much controversy- and long lines- as Chick-fil-A. Located near the center of campus, the restaurant is a popular destination for many students looking for a place to grab a bite.

However, while the establishment may be a favorite dining spot for many, for others it is a place of bigotry and hate.

Chick-fil-A has been known for years to be detractors of same-sex marriage, even going as far as to donate millions of dollars to organizations fighting the cause for equality. As the company’s CEO Dan Cathy has stated “We are very much supportive of the family – the biblical definition of the family unit.”

Last year alone the company gave over $1.6 million to the Fellowship of Christian Athletes, an organization that bans LGBTQ athletes.

However, even with all of this active hate spewing from a company that is supposedly based on the idea of loving one’s neighbor, they have still become the third largest restaurant chain in the United States. Clearly there is money to be made by having one on campus.

This is clearly at odds with UNF’s supposed mission statement though. The university claims that it “stands in unity… regardless of… gender identity and expression, sexual orientation, marital status, national origin, or veteran status.”

It even goes as far as to state that “[UNF] strongly condemn acts of hate and bigotry as antithetical to the university’s core values of mutual respect and civility.”

However, this statement is completely at odds with a business that is actively running on campus. If the university truly cared more about upholding the values that it puts such strong emphasis on in its writing, then why would it allow this restaurant to continue to profit within its jurisdiction?

Clearly, money is much more important to the university than any meaningless words that it may tout.

It should be noted that as of November 18, 2019, Chick-fil-A has supposedly ended its practice of giving to charities known for perpetuating homophobia and discrimination, including the afroementioned Fellowship of Christian Athletes as well as the Salvation Army. They have also said this in the past and, as mentioned in a previous Spinnaker piece, that did not prove to be true.

Nonetheless, this does not free UNF from any of the blame that has been placed upon it in this article.

Chick-fil-A’s practices have been publicly known for many years. There is no excuse for the university not having taken action sooner given its so-called principles. If UNF and its administration truly held the inclusion and protection of all its students as its number one priority, it would not have allowed for a corporation of hate to remain on campus for so long.

Chick-fil-A may have ended its homophobic contributions, but this does not mean that it has stopped perpuating hate.

Members of the LGBTQ company have dealt with homophobic remarks from customers as well as fellow employees. In 2002, the company was sued by a Muslim man who had been fired for his refusal to pray to Jesus.

When neo-Nazi flyers were discovered around campus, one was found outside of the homophobic restaurant.

The University of North Florida claims to be perpetuating an atmosphere of inclusion and diversity, but continues to profit off a corporation hellbent on doing the complete opposite. When will the administration learn that there is more to a successful university than just numbers?

Profit does not equate to moral justification. Perhaps the university needs to take its own statements a little more seriously.