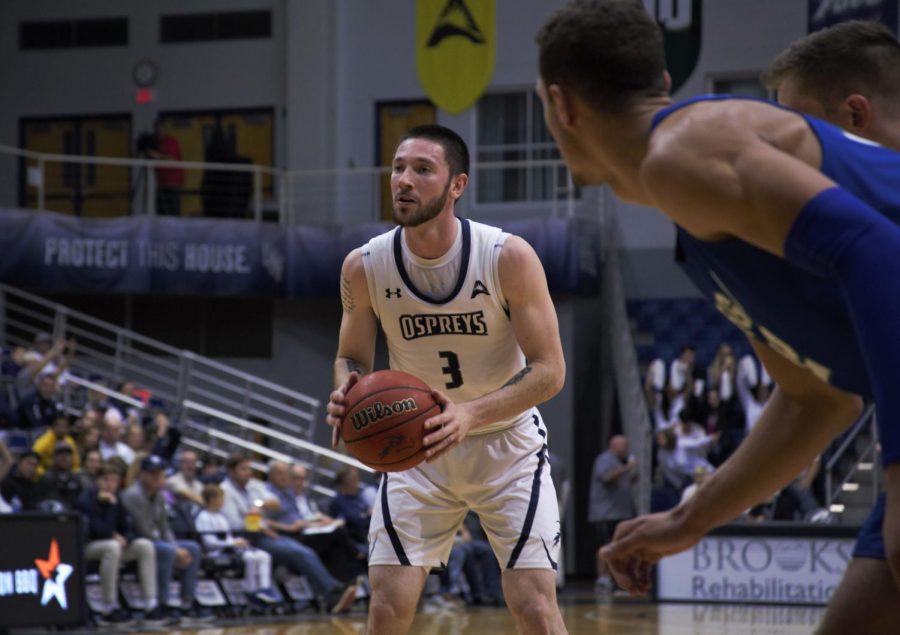 The Birds of Trey nailed 16 three-pointers in an 89-74 win over Florida Gulf Coast.

Wajid Aminu scored the first five points of the game for the Ospreys to stretch their lead to 5-0 in the first two minutes of the game.

The Birds of Trey were in full effect, going 8-17 from deep throughout the first half.

FGCU made their presence on the interior when they out-rebounded the Ospreys, 19-16, powered by Caleb Catto’s six boards.

The Ospreys led at halftime, 42-31, with Carter Hendricksen and Aminu combining for 21 points.

UNF picked up right where they left off, shooting 8-14 from deep and 17-33 from the field.

The Eagles offense began to pick up with the team landing 55 percent of their shots from the field.

Catto led the Eagles with 16 points throughout the game and pulled down seven rebounds. Despite their hot shooting, the team in Blue and Green couldn’t dig themselves out of a hole that UNF’s three-point attack kept creating, resulting in the 89-74 UNF win.

With his five assists against FGCU, Ivan Gandia-Rosa eclipsed 500 career assists at UNF, making him the second player behind Dallas Moore to record 1,000 career points and 500 assists at UNF.

UNF Men’s Basketball Head Coach Matthew Driscoll was impressed with the team’s effort in the second half and limiting turnovers.

JT Escobar was the driving force behind UNF’s three-point attack with 20 points (5-9 from deep).

With the Ospreys’ strength in numbers this season, Escobar mentioned how this will be an asset for the upcoming conference play.

“Whenever you’re trying to win a championship, you’re going to need everyone on board and that’s what we got going right now,” Escobar said.

The Ospreys shared the sugar throughout the game with all of the starting five scoring in double-digits. Garrett Sams, Aminu and Hendricksen each pulled down seven rebounds a piece in the win.

This was UNF’s third straight conference win, tying them at the top of the ASUN standings with Liberty.