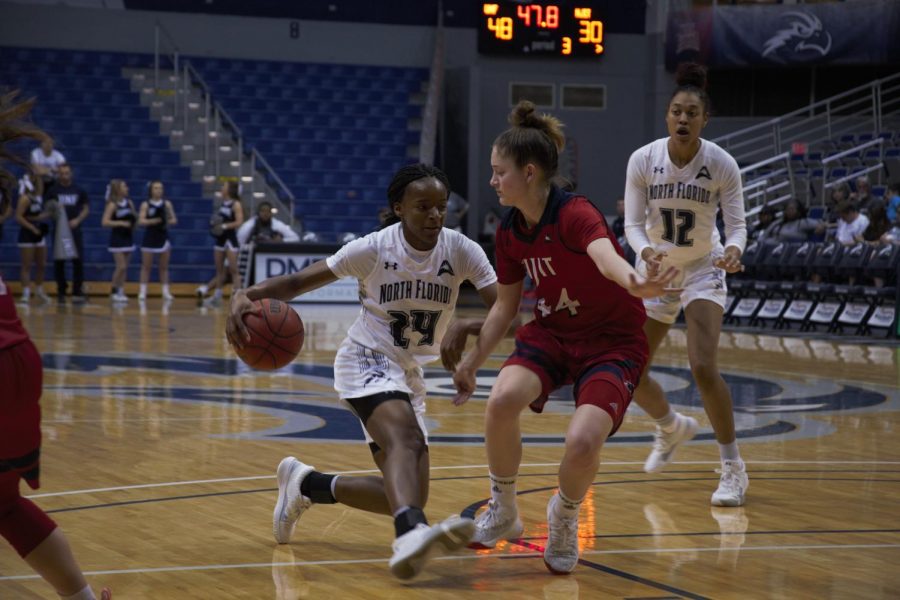 The Ospreys’ women’s basketball team ran away with a 71-48 home win against the NJIT Highlanders on Saturday.

Green played the role of facilitator for the Ospreys’ offense.

The senior totaled 11 assists, giving her a double-double. Green’s performance marks the first time since 2010 that an Osprey earned a double-double in points and assists.

“The key is I try to keep my head up when I’m dribbling… and I was seeing my post players open so I was trying to get them the ball when they were down there working hard,” Green said.

UNF started strong and never looked back. They jumped out to a quick five-point lead in the first five minutes of the game. They would end the quarter up by nine. Junior Jazz Bond had six points in the quarter.

The Ospreys went into the half leading 34-20. Rhetta Moore led all scoring with eight points in the half including a pair of three-pointers.

Baskets for the Highlanders were few and far between. They only hit two shots from deep on 15 attempts in the half as a team.

The Ospreys came out fast and furious to begin the third quarter. They outscored the Highlanders 18-10 in the period and did not allow a basket until six minutes into the third.

By the time the fourth quarter rolled around, the Ospreys’ 19-point lead was almost insurmountable. Despite being up by so much, UNF showed no sign of slowing down. They outscored the Highlanders 19-18 in the final frame.

UNF women’s basketball Head Coach Darrick Gibbs had high praises for the Ospreys’ efforts on both sides of the ball.

“This was the most consistent game we played this year on both sides of the floor,” Gibbs said. “That’s a testament to these guys and their commitment to what we do and how we do it.”

The Ospreys will take on conference leader FGCU at home on Monday, Jan. 13 at 7:00 p.m.