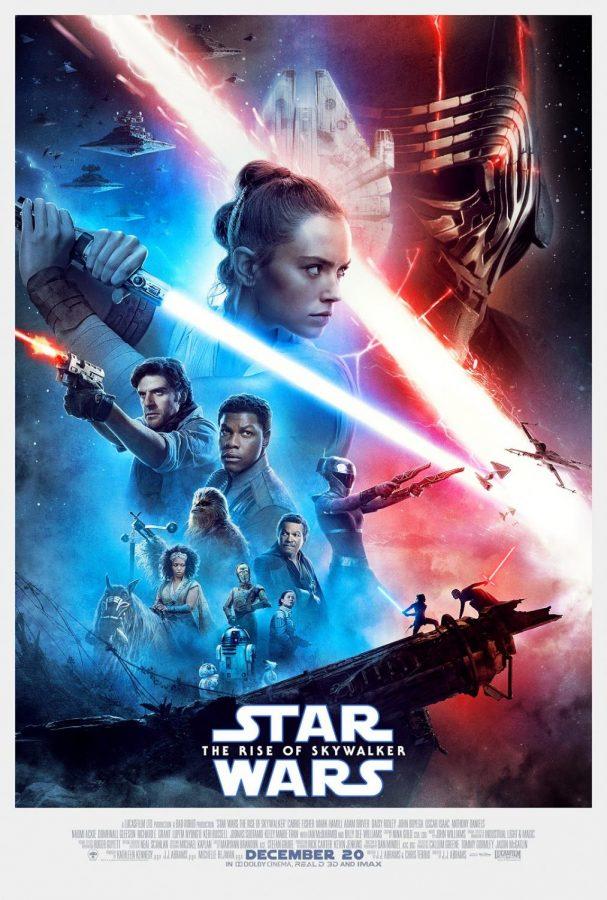 It has been several years in the making, but the nine-part Skywalker Saga has finally reached its climactic conclusion with The Rise of Skywalker. As you can imagine, a lot is riding on this film as its expected to give a fitting end to not only a trilogy, but an entire series of films made over the course of forty-two years. There is a lot this movie has to do to wrap up this legendary series while pleasing critics, fans, and moviegoers. Did they succeed? It’s hard to talk about without spoiling it, so let’s look over it together.

The war between the Resistance and the First Order is reaching its climax as Rey completes her Jedi training while looking for the secrets to her past. With the First Order getting stronger, Rey and her friends have to go on numerous sidequests to find them before they can take over. While this is going on, Kylo Ren is on the verge of conquering the galaxy and it’s revealed that all these events are being manipulated by a dark force from the past. This, as you all should know by now, is Emperor Palpatine who somehow survived being dead all these years and plans to relaunch his campaign to restart his new Empire. We get old characters working with new characters, secrets are revealed, and it all culminates in a conclusion that will leave people either satisfied or divided.

As long time fans of this series we have some mixed feelings on this film. While it’s something we didn’t regret seeing, it’s not hard to see what works and what doesn’t. One thing that we noticed was that the story, particularly the first half was very messy. Without going into major details this part of the movie is very plotpoint based. While it was great to see Rey, Finn, and Poe finally together, it doesn’t help that you’re being taken from place to place with details constantly being explained to you. We understand that time has passed and that they want to catch us up to speed. Though we felt it was unnecessary as we already know these characters well enough when we see them here. We’ve been following them for a while so we don’t need that many details to catch up on. Whereas the previous two films took their time developing their stories and characters, this one is constantly on the move and doesn’t really give you any time to breathe and take anything in. Because of this certain characters are pushed to the sidelines and don’t have much going for them here. Numerous side characters in this film come and go to the point where you question why they were even in this movie. Honestly they could have cut down this part of the film and focused more on some of the more important characters, namely Rey and Kylo Ren.

We also like to talk about the handling of Carrie Fisher’s scenes in this movie. For those who don’t know Fisher passed away in 2016 well before filming of this movie began. You can tell they wanted to conclude Leia’s story so they took archive footage from The Force Awakens to craft her performance and insert it into this film. We can only imagine how much of a difficult and emotional task this must have been for the people involved. Thankfully they managed to pull it off really well. We feel that in the future for people who don’t know the year of Fisher’s passing, when they see this movie it wouldn’t be apparent to them. While you may notice how she looks when she’s inserted in some scenes, we feel this part of the movie was fairly well done.

Naturally the film is gorgeous to look at, there are so many environments and sequences that are truly something to behold. Though some of them do feel like style over substance, we were invested in everything involving Rey and Kylo Ren. As far as character’s in this series go, these two are easily the biggest standouts and are explored pretty deeply here. We were for the most part satisfied with this part of the story. The film does give us some answers to try and explain some things, though some of them don’t necessarily add up and raise even more questions. For example, its shown why Rey is as powerful as she is. Though we didn’t see it coming, it does become confusing the more we thought about it. If anything for every secret we learn, they raise a whole ton of questions.

Looking back on the film it’s obvious that they didn’t have a clear roadmap leading up to this point. We had a lot of elements set up in The Force Awakens, but then the next film, The Last Jedi, got a different director who set things differently. Now we have this film which is taking both films into account to make a satisfying conclusion. Even though they had two films of setups, there are so many added elements in the story that show they didn’t exactly plan ahead. Like how they brought the Emperor back. Thinking back on it, it does make sense to include him here as chronologically this series began with him and should end with him. But to bring him in now at the end of the trilogy with so many other elements. This was way to big a plotline to do in the final film. Having watched these movies back to back it didn’t feel like this was the planned endgame they we’re building up to. While we were excited to see his inclusion in this film, it did feel like a massive stretch the more we thought about it. With so many different elements mashed together here, the film at times felt like someone’s Star Wars fan fiction. In that there are some elements that were done really well. While others felt forced in just to appeal to the fanbase.

Despite the films flaws, there are a lot of elements that come together really well. Without spoiling it, the film goes out of its way to celebrate the legacy of the previous films. While there are a lot of things fans will disagree on, we think they will appreciate the nods and tributes to not just the main films, but Star Wars as a whole. It’s impressive how they managed to get so many Star Wars alumni to make this a big event. We can see the effort put into this movie, it’s just that the plot that’s all over the place. To sum up our thoughts, if you’re looking for the conclusion to the Skywalker Saga you’ll get it. It’s just in a story that doesn’t always make sense.

When it comes to Star Wars films it’s hard to predict the future because every film in some shape or form ends with their own legacies. Everything from the originals to the prequels, to even the horrendous Star Wars Holiday Special has left an impact. Much like how the legacy of these movies change over time, so do people’s opinions on them. We remember when we were younger and seeing people completely trash one film only to pan the new one that was coming out. It’s clear people are constantly looking for someone to blame as to why Star Wars isn’t what they remembered it to be. We think fans need to realize that there are always going to be ups and downs to everything. Star Wars much like anything can be great, average, and even bad at times. Instead of looking for more people to blame, we need to accept the fact that not everything is going to be as how we envisioned. Whatever the case, Star Wars is never going to remain the same and is always going to turn out more material in the future. The way you look at these films is going to be different from how other people view it. Whether it be generational gaps, or years of active fandom, people are always going to have different opinions.

Despite what the film has against it we can see people really liking this movie. It looks wonderful, has character, and does make you feel emotional upon leaving the theatre. Which is what any film should do. Even though the Skywalker Saga is over there are still going to be more stories to tell. Much like when Return of the Jedi or Revenge of the Sith ended, there’s always going to be new stories in the near future. In our opinion, there are so many TV shows, games, and books that surpass even the best of these movies. They contain stories that take place in between films, introduce creative ideas, and show new points of view that we rarely see. It’s that reason why Star Wars has stood the test of time. Even though not all of it comes together, we still end up with a lot of unforgettable characters, great stories, and a universe that connects with people because of its complexity and simplicity.

Its epic, its emotional, it lasts forever.