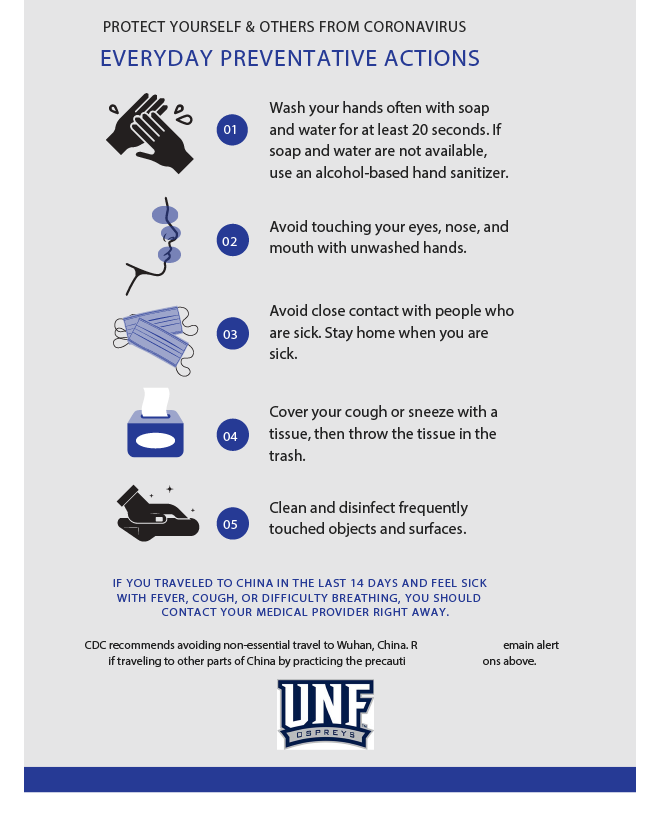 A seafood market in Wuhan, China is the epicenter of a coronavirus outbreak that has infected thousands. So far, a few cases of the outbreak, currently known as 2019-nCoV, spread to other Asian countries: Thailand, Taiwan, South Korea, and Japan. So far, five cases of 2019-nCoV have been reported in the United States, the first of which arose in Washington on Jan. 15.

Nursing Instructor at UNF’s Student Health Services Pat Richards says the university is aware of the disease and are taking preemptive measures to protect against it.

“The Chinese government is saying this is serious, it’s not an international crisis at this point, but it is serious,” Richards said. “They have actually closed down Disneyland in China, places people will gather. And maybe if you have one person who has it and spreads it, it can become a nightmare to try to contain.”

2019-nCoV was first reported to have spread from animals to humans, but the CDC says there is evidence that human-to-human spread is occurring. The World Health Organization (WHO) and the Center for Disease Control (CDC) are currently monitoring the situation and will continue to provide updates as it develops.

“I just want the students and the parents and the people to know that we are aware of it, we’re on top of it, we are not taking it lightly, we are paying attention,” Richards said. “It’s a virus so we have to continue to react to it as a virus.”

The CDC implemented prevention protocol weeks in advance prior to the Jan. 15 case in the U.S. The patient was treated and a specimen of their disease was sent to the CDC. The CDC used a Real Time Transcription-Polymerase Chain Reaction test (rRT-PCR) and confirmed the diagnosis that the disease was indeed 2019-nCoV. The CDC considers this a serious public health situation, but insists the immediate risk to the US public is minimal. There are currently limited resources for treating 2019-nCoV, and there is no vaccine thus far.

“We’ve had, so far, five cases in the United States. All of them seem to be responding to supportive treatment. It is a virus, so there’s no antibiotics or particular medicines that seem to make it better,” Richards said. “The testing can take a long time, as in a week or two, to get the results back, so the person is better, or not, by then.”

The risk of infection from 2019-nCoV at UNF is very minimal, but Richards insists that students who have flu-like symptoms should go to Student Health Services for a checkup.

“Anyone certainly who wants to come by here and have us check them for influenza or an illness, they can do that,” Richards said.

A large factor in the spread of diseases like SARS and other viruses is intercontinental travel. The CDC’s response to the new coronavirus included protocols to screen at major international airports worldwide including Atlanta (ATL), Chicago (ORD), Los Angeles (LAX), New York City (JFK), and San Francisco (SFO). If you are expecting to travel by air in the coming weeks, especially to and from Asia, be prepared for extended security protocol time as the CDC and health officials globally try to corral this coronavirus.

“We do not have any students currently in China. We are not sending any groups to China in the near future, until later in the spring,” Richards said. “And we’ll have to see how that evolves. Right now it’s all just watch and wait.”

From 2002 to 2004, the SARS coronavirus infected 8,098 people and killed 774, according to the WHO. Eight cases of SARS reared in the United States, and each of these patients previously traveled to places where the SARS outbreak reached. Coronaviruses like these are typically difficult to analyze and study because they mutate as the disease develops and spreads, Richards said.

“Most of the universities in Florida are saying our risk at this time seems very low,” Richards said. “That does not mean that we are not concerned. What I want people to do is not panic. Keep your feet on the ground and pay attention to your environment. And listen to your body. If you feel sick, come in and get checked.”

The CDC recommends standard hygiene practices to prevent further spread of the disease. Wash your hands often, avoid sick people and stay home when you are sick, and clean and disinfect frequently touched objects.