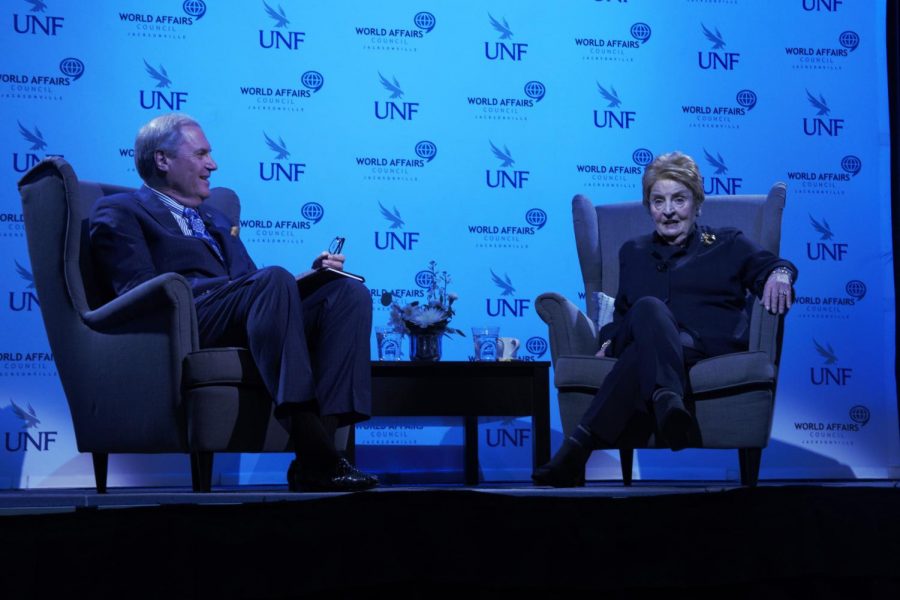 Vladimir Putin is not Madeleine Albright’s biggest fan. In fact, the former U.S. Secretary of State referred to him as a “cold fish” on Wednesday night during “A Conversation with Madeleine Albright” which was hosted by the World Affairs Council of Jacksonville and UNF Distinguished Voices Lecture Series.

Albright was the first woman to fill the role of Secretary of State, at the time making her the highest ranking woman in the history of the United States government. On Wednesday night, in the UNF Arena, she spoke to thousands of people as if she were having a cup of coffee with all of them individually. Her time speaking was riddled with jokes and stories and yielded a marriage roaring laughter from the audience at times and the complete silence that comes with intent listening at others. She told stories of her time as a government official and what it was like to be the only woman in rooms full of leaders and lawmakers from all over the world.

After nodding to the UNF Fearless Women initiative, President Szymanski asked Albright what advice she would give to the women students of UNF.

“How can they be the next Madeleine Albright?” Szymanski asked.

“You need to interrupt,” Albright said. “Because I learned that when I was in office and things, I was always the only woman in the room. I would raise my hand and they wouldn’t call on me. Then what would happen was that I was totally ignored. I decided that you have to be listening actively, with the idea that you are going to interrupt. But you do have to know what you’re going to say and you have to have a strong voice.”

Albright currently teaches The Practice of Diplomacy at Georgetown University in Washington, D.C. She also shared her thoughts on the state of democracy and diplomacy in general, and more specifically, our current political climate.

Albright nodded to her father, Josef Korbel, who was a Czech-American diplomat and political scientist.

“My father – when we came to the United States – said that Americans didn’t fully understand first of all, how grateful to have a democracy and how it’s a combination of being both fragile and resilient,” Albright said.

After speaking to the importance of democracy within our own country, Albright extended the conversation to her impression of how the U.S. interacts with other nations. She spoke to her concern of our relationship with other nations, namely Iran and North Korea.

“The first step of diplomacy is when you recognize a country. We have not recognized North Korea and we don’t recognize Iran; therefore, nobody is there. We have no eyes and ears on the place. I think that that’s very dangerous. Diplomacy isn’t a gift,” Albright said. “Diplomacy is a way that we have to talk to each other.”

Albright bounced around different topics throughout the evening, some political and some personal. But the issue of the United States’ relationship with Russia came up several times. She told a story of when current Senator Mitt Romney had identified Russia as a threat to the U.S. and she called him “a joke” at the time. Albright went on to reflect on how she eventually felt as though Romney was correct and apologized to him for her comment.

“[Wednesday’s] event with Secretary Albright is most definitely a highlight of my time at UNF, and many students I have spoken with have echoed that sentiment,” Student Government President John Aloszka said in a statement to Spinnaker. “What I most admired about Secretary Albright’s interview was her ability to recognize when she had been wrong in the past, own up to those occasions, and then apply those lessons to the foreign policy climate today.”

Albright left students with an instruction to remain motivated and curious enough to explore the world around them.The lecture ended with a round of applause and the same standing ovation that Secretary Albright was welcomed to the arena with at the beginning of the evening.

The next Distinguished Voices Lecture at UNF will be welcome Malcolm Turnbull at the Herbert University Center on March 24.