Graphic abortion display on Campus: Why they’re here and what students think about it 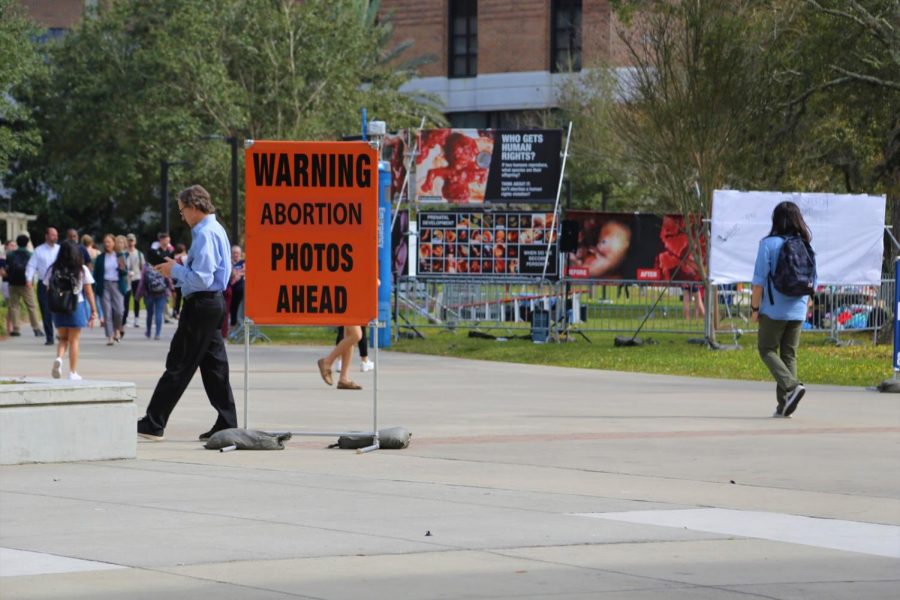 Organizations like the Canadian Center for Bio-ethical Reform (CCBR) have held anti-abortion demonstrations at UNF before. The CCBR is an educational human rights organization that is against abortion. They believe that abortion should never be considered, according to Cameron Côté, an Outreach Director for the CCBR. They display graphic images of aborted fetuses and embryos and hand out pamphlets hoping to interact with students and discuss their beliefs.

The CCBR e-mailed Spinnaker a press release stating what they’re trying to accomplish along with some of their thoughts on abortion.

“Our goal is to change minds and save lives – and we see abortion victim photography accomplish that time and again,” Côté says. “Moreover, we recognize that abortion hurts women and have seen how the images can help move a woman from denial into seeking help and healing.”

The CCBR justifies displaying many graphic images of aborted fetuses and embryos. The organisms were being compared in size to coins and pencils.

Côté believes, “The images are disturbing because abortion, which tears apart tiny human beings, is a disturbing and violent act.  The question is: should we be concerned about the images, or the fact that every day more than 2,400 pre-born children are becoming these images because of abortion. If the pictures of the act of abortion are so offensive, wouldn’t it follow that the act itself is even more offensive?”

A comment on our previous article about the anti-abortion display by a Kathryn Humphreys reads as follows:

“I’m curious about when the UNF president decided he cared more about these protestors displaying these massive graphic signs than the emotional and mental health of his student body? Has he acknowledged that these images are traumatic to some of the students on campus who have had miscarriages and abortions? When he decided to allow them to display these images instead of simply holding signs with words on them, did he understand that exposing people to trauma can increase the rate of suicide and self-harm in a population?”

“Does our Dean of Students and President of UNF, and all others involved in making decisions for our campus recognize that the “freedom of speech” does not mean the ‘freedom to be an inconsiderate asshole’? Maybe I’ll hold a sign with a picture of Gerri Santoro’s bleeding body, who died after attempting her own abortion in 1963 and being left to hemorrhage and die alone in a hotel by the person who got her pregnant. Or is that too graphic?”

NextGen Florida arrived at the scene with posters in protest to the CCBR, and one of the posters stated the photos being shown of abortion were fake.

Planned Parenthood also set up at the scene, promoting a petition for “House Bill 265” that would remove the rights for minors to receive abortion services without their parents’ permission

“Abortion is a form of healthcare that everyone should have the right to access whether they need it or not,” argues Connor Racine, a Planned Parenthood Regional Organizer.

We asked some fellow ospreys to discuss their opinion on abortion and what they think about the graphic images on campus.

Madison O’toole, a Biology Senior is pro-choice and believes“While they are technically not breaking any free speech laws, it’s one of the least effective ways I’ve ever seen anyone communicate very strong opinions on topics like abortion. They were also using false photos at some point.”

“These pictures here are a little off and I don’t think they should have something like this just blatantly out on campus,” said Jarek Hickman, a Computer Science Senior.

The University did alert students that the anti-abortion campaign will visit the campus outside the Student Union.

“The freedoms of speech and assembly are basic and essential rights that the university strives to protect,” said the university.

On February 11, the second day of the demonstration, UNF Students for a Democratic Society made an appearance to counter-protest despite the current charges against them from Student Conduct for their silent protest of Madeleine Albright’s visit to UNF last week.