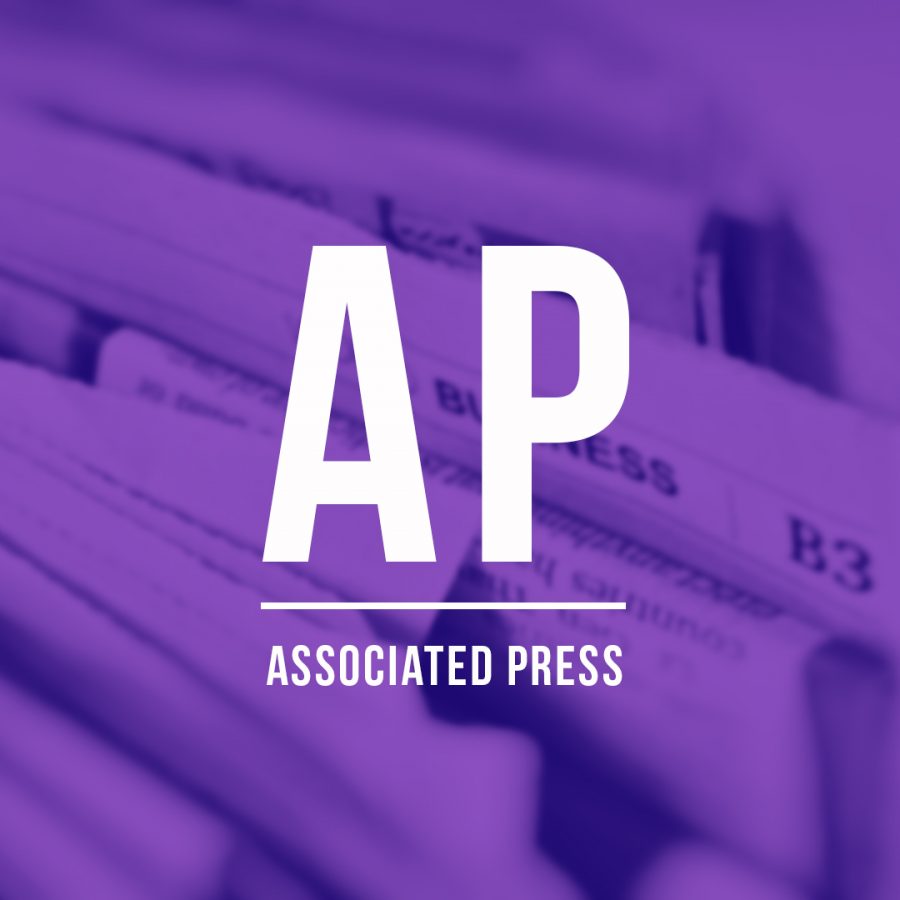 BEIJING (AP) — China on Thursday reported a sharp spike in deaths and infections from a new virus after the hardest-hit province of Hubei applied a new classification system that broadens the scope of diagnoses for the outbreak, which has spread to more than 20 countries.

Japan reported its first death, a woman in her 80s who had been hospitalized since early February. She is the third confirmed fatality outside of mainland China, after deaths in the Philippines and Hong Kong.

The new diagnostic approach came on the same day that Hubei and its stricken capital, Wuhan, replaced their top officials in an apparent response to public criticism of how authorities have handled the epidemic.

The death toll in China reached 1,367, up 254 from the previous day. The number of confirmed cases jumped 15,152 to 59,804. The unusually large increases were due to the change in Hubei’s approach.

The total now includes more than 13,000 cases of “clinical diagnosis” in Hubei, which appears to include those based on a doctors’ analysis combined with lung imaging, as opposed to waiting for laboratory test results.

In breaking down the large number of new cases in China, National Health Commission spokesman Mi Feng said Hubei had adopted a revised diagnosis and treatment plan aimed at accelerating the identification and treatment of patients. 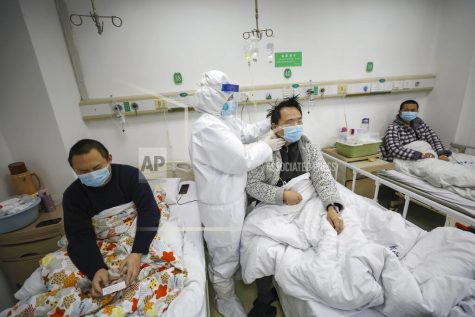 APA doctor checks the conditions of a patient in Jinyintan Hospital, designated for critical COVID-19 patients, in Wuhan in central China’s Hubei province Thursday, Feb. 13, 2020. China on Thursday reported 254 new deaths and a spike in virus cases of 15,152, after the hardest-hit province of Hubei applied a new classification system that broadens the scope of diagnoses for the outbreak, which has spread to more than 20 countries. (Chinatopix Via AP)

That adds a “clinical diagnosis case” classification to identify suspected cases who appear to have pneumonia so that patients can be accepted as soon as possible and treated as confirmed cases, Mi said, adding that should “reduce severe illness and mortality.”

One expert said the changed case definition in Hubei likely speaks to the crush of patients the health system is experiencing and the backlog of untested samples.

“Clearly in Wuhan, the health system is under extreme pressure and so the first priority has to be the patient,” said Mark Woolhouse, a professor of infectious disease epidemiology at the University of Edinburgh.

He said it wasn’t unprecedented for case definitions to rely on doctors’ diagnoses rather than wait for laboratory confirmation, and that these kinds of changes usually happen when there are simply too many patients to process in a fast-moving outbreak.

“I’m not surprised that this has happened given the way the outbreak has been going in China,” Woolhouse said.

“You have to be pragmatic and take the concerns of the patient first and treat them as if they already have the disease, even in the absence of lab confirmation.”

The appointments follow the sacking earlier this week of two leaders of the provincial health commission. State media also reported that a slew of others were expelled from the party for transgressions related to the epidemic.

The public has widely criticized local officials for failing to respond quickly and decisively to the new virus. 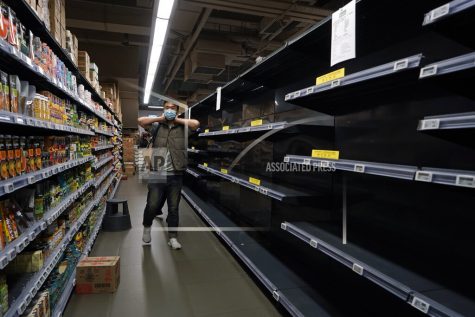 APA man wearing face mask, walks past empty shelves at a supermarket in Hong Kong, Thursday, Feb. 13, 2020. China on Thursday reported 254 new deaths and a spike in virus cases of 15,152, after the hardest-hit province of Hubei applied a new classification system that broadens the scope of diagnoses for the outbreak, which has spread to more than 20 countries. (AP Photo/Kin Cheung)

Authorities initially assured people that there was little to no risk of human-to-human transmission, a statement that was later retracted. Wuhan residents said hospitals were overcrowded and lacked sufficient medical supplies.

Doctors who tried to share information early on were reprimanded by police for “spreading rumors.”
Many countries have implemented travel restrictions on recent visitors to China, which has more than 99% of the world’s reported infections.

In an unprecedented measure to contain the disease, recently named COVID-19, the Chinese government has placed the hardest-hit cities — home to more than 60 million — under lockdown. One district in Shiyan, a city in Hubei, has implemented “wartime measures,” barring residents from leaving even their apartment compounds for two weeks. 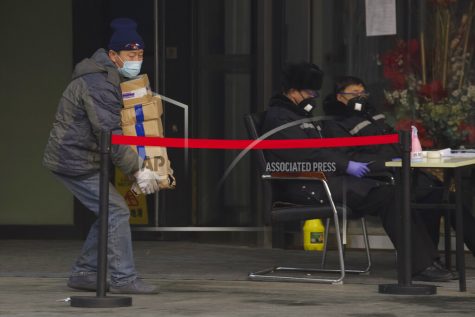 APA delivery man carries goods near a health checkpoint into a office building in Beijing, China Thursday, Feb. 13, 2020. China is struggling to restart its economy after the annual Lunar New Year holiday was extended to try to keep people home and contain novel coronavirus. Traffic remained light in Beijing, and many people were still working at home. (AP Photo/Ng Han Guan)

According to a local government notice, neighborhood committees will distribute basic necessities at a fixed time and at fixed prices, as well as help residents purchase any medicine they might urgently need.

Xu Min, a resident of Shiyan’s Zhangwan district, said her neighborhood entrance was being guarded by community workers and security staff.

“It doesn’t have too much of an impact on our life, except that we’re not allowed to go out,” Xu said.

World Health Organization spokesman Tarik Jasarevic said the agency is seeking more clarity from China on the updates to its case definition and reporting protocol.

“It is our current understanding that the new case definition widens the net, and includes not only lab-confirmed cases but also clinically diagnosed cases based on symptoms and exposure,” Jasarevic said in an email to The Associated Press.

“The jump in cases today reflects the broader definition,” he said.

An advance team of WHO experts has been in China since Monday. The team is here to “discuss specific arrangements for the China-WHO joint mission with the Chinese side,” Chinese foreign ministry spokesman Geng Shuang said at a daily online briefing.

“The purpose of the joint mission is that experts of both sides can have in-depth communication on the situation and efforts of prevention and control, and come up with advice for China and other affected countries,” Geng said.

In Vietnam, official media reported that a village of 10,000 northwest of the capital, Hanoi, was put in lockdown due to a cluster of cases there.

The online newspaper VN Express cited a senior official of Vinh Phuc province as reporting an increase in cases in Son Loi. Vietnam has confirmed 16 cases, most of them in the province.

Japan’s Health Ministry announced Thursday that 44 more people on a cruise ship quarantined in the port of Yokohama, near Tokyo, have tested positive for COVID-19. The ship has 218 infections among its 3,700 passengers and crew. 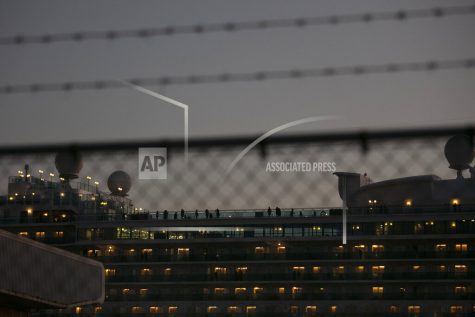 APTourists quarantined on the Diamond Princess cruise ship get some fresh air on the top deck of the ship Thursday, Feb. 13, 2020, in Yokohama, near Tokyo. Life on board the luxury cruise ship, which has dozens of cases of a new virus, can include fear, excitement and soul-crushing boredom, according to interviews by The Associated Press with passengers and a stream of tweets and YouTube videos. (AP Photo/Jae C. Hong)

Health Minister Katsunobu Kato told reporters five of the patients who were already sent to hospitals for isolation and treatment have severe symptoms and are on artificial respirators or under intensive care.

Another cruise ship, the Westerdam, finally docked Thursday in Cambodia after being turned away by several Asian and Pacific governments. No cases of the viral illness have been confirmed among its 1,455 passengers and 802 crew members, according to operator Holland America Line.

Thailand refused to allow the Westerdam to dock this week after it had already been turned away by the Philippines, Taiwan, Japan and Guam over virus concerns. 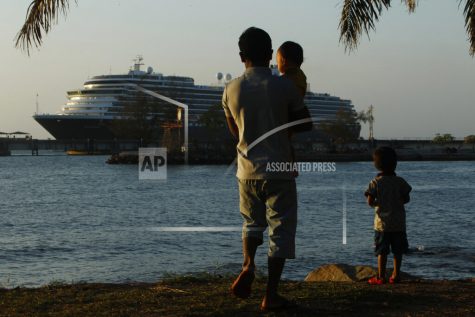 APThe Westerdam cruise ship, owned by Holland America Line, is docked at the port of Sihanoukville, Cambodia, Thursday, Feb. 13, 2020. The Westerdam, turned away by four Asian and Pacific governments due to virus fears, anchored Thursday off Cambodia for health checks on its 2,200 passengers and crew. (AP Photo/Heng Sinith)

The Westerdam began its cruise in Singapore last month and its last stop before it was refused further landings was in Hong Kong, where 51 cases of the viral disease have been confirmed.