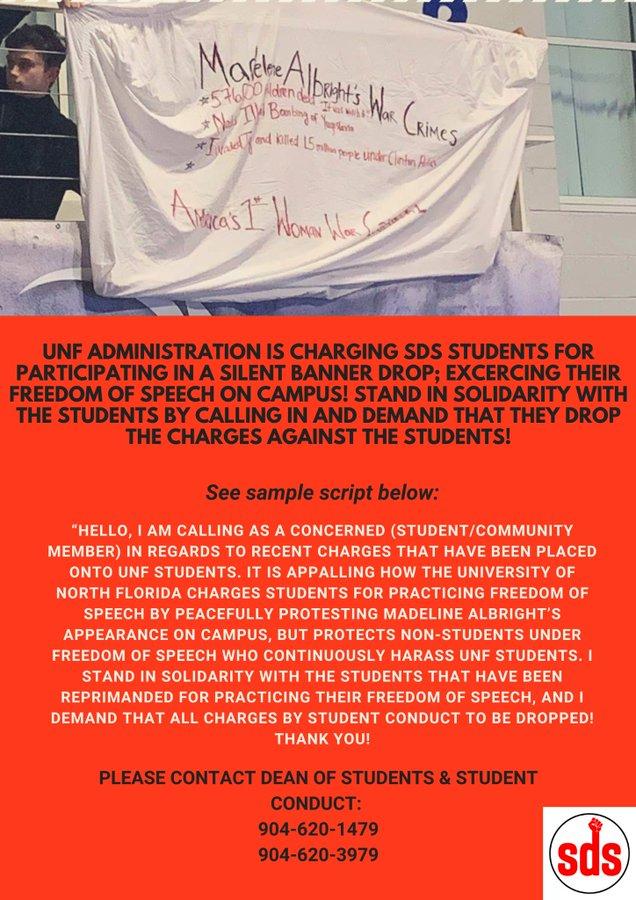 UNF SDS asks for students to call the Dean of Students and Student Conduct to overturn the charges brought on by their silent banner drop on February 5, 2020. From UNF SDS Facebook.

As of Friday, February 14, Student Conduct has reported approximately two dozen phone calls and 20 emails from those in support of UNF Students for a Democratic Society (SDS) after SDS was referred to Student Conduct for a silent banner drop during Madeleine Albright’s lecture in the UNF Arena on Wednesday, February 5. The majority of those who called in identified as UNF students and all were in support of SDS, according to the University.

The two-week long saga began when SDS attended Madeleine Albright’s lecture at the UNF Arena and performed a silent banner drop listing Madeleine Albright’s “war crimes” and suggesting that Albright was “not welcome at UNF.” Shortly into their banner drop, SDS was stopped by UPD and three of the members participating were referred to Student Conduct.

In response to the referral, SDS asked students to call in to Student Conduct and the Dean of Students throughout the week of Monday, February 10 through Friday, February 14.

SDS has maintained that UNF is attempting to “repress” their First Amendment right to freedom of speech while the University at the same time protects those of off-campus groups like the preachers and the anti-abortion group that recently visited campus. When asked how they perceived the call-ins effectiveness, SDS was not immediately available for comment.

The University has stated that it cannot comment on student discipline due to FERPA restrictions. However, SDS has released what appears to be a photo of the referral some of their members received.