UNF faculty still at odds with BOT over raises 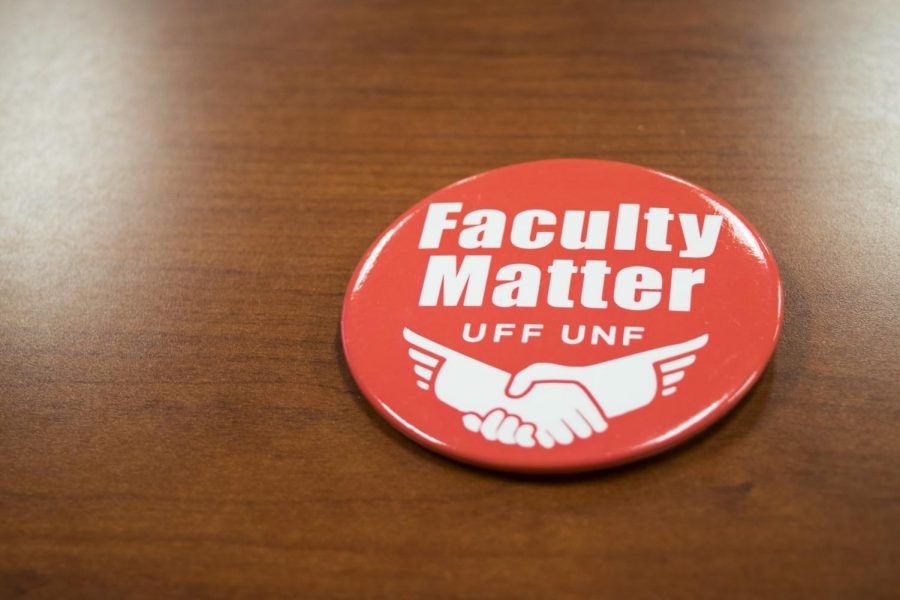 The United Faculty of Florida’s UNF representatives have yet to agree with the Board of Trustees (BOT) on pay raises for the 2019-2020 school year after another bargaining session on Feb. 21.

The BOT, represented by attorney Michael Mattimore, counter-offered UFF-UNF’s previous proposal of a 9 percent salary increase across the board with a 3 percent increase, plus a one-time bonus to qualifying staff. Chief Negotiator of the UFF-UNF Bargaining team Dr. Greg Gundlach said this is not a reasonable offer, insisting that the 3 percent raise and bonus is not enough.

Gundlach urged Mattimore to negotiate the salary figures at the table, but Mattimore insisted UFF-UNF write a formal proposal for him to take back to the BOT for further discussion at a future session. This led Gundlach to say that he did not believe Mattimore had the power to negotiate a deal.

“You are empowered to bargain, yes or no?” Gundlach asked Mattimore.

“Would you take 6 percent?” Gundlach offered.

“If you make me an offer in writing, I will take it back [to the BOT],” Mattimore replied.

UFF-UNF highlighted the original graph they showed the BOT showing the disparity between UNF faculty salaries compared to the rest of Florida’s university system. Mattimore replied saying the results were skewed, but Gundlach pointed out that the statistics shown were produced officially by UNF.

“So you won’t acknowledge the National Education Association numbers that are on that chart that originally came from the University of North Florida? Are you saying those numbers are wrong?” Gundlach asked Mattimore.

“Our numbers are different than those numbers, and we think they’re wrong,” Mattimore replied. “We explained all that. We had a session, we gave it to you in writing.”

UFF-UNF also presented the BOT with results from a recent Faculty Life and Job Satisfaction survey. According to the survey, while 69.4 percent of faculty are satisfied with their jobs, 78.4 percent are dissatisfied with their salary. Furthermore, 82.8 percent of faculty do not believe their work is valued by upper administration, which includes the President’s office and the Board of Trustees. The survey was sent to 948 UNF faculty members, with 193 valid responses. This marks a 20.3 percent response rate, which is considered a typical response for survey research.

“This is the context in which we’re having the conversation about the economic future of our faculty,” Gunlach said. “The BOT has offered us a new strategic plan that asks faculty to do more. The prior strategic plan was not met as it relates to faculty salaries and I think it’s manifesting itself in the types of numbers you’re seeing.”

The session also discussed non-economic proposals involved in the collective bargaining agreement. Out of the 34 non-economic articles outlined by the BOT, UFF-UNF agreed with nine and compromised on 10. UFF-UNF implored the BOT representatives to go forward with the articles that were agreed on, despite disagreeing with 15 of the articles, but Mattimore refused to accept it.

“The 15 that you say are status quo are actually 15 no’s to us. When we suggest a change and you say status quo, that’s saying ‘we’re rejecting your position’,” Mattimore said. “The thing about it is, the number that we agree or the number compromised has really no relevance to whether we get to an agreement or not, because one of those fifteen, just one of them, could be critical to us.”

Since the two sides could not come to an agreement on salary increases, UFF-UNF formally proposed a 6 percent salary increase for Mattimore to take to the BOT for consideration. The two sides agreed on a tentative meeting date in March to continue bargaining where UFF-UNF awaits the BOT’s official response or counter-offer.

Spinnaker has reached out to the Board of Trustees concerning the sessions, but the board is not permitted to discuss the ongoing negotiations.

The next bargaining session is tentatively scheduled for Friday, March 13, with the time and location to be determined. These sessions are open to the public.