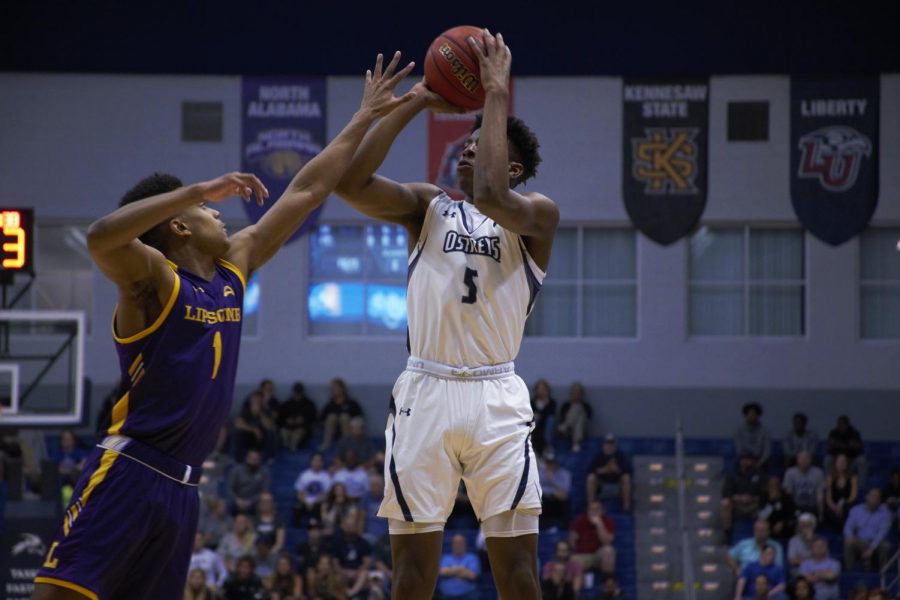 The ASUN Semifinal bout between UNF and Lipscomb was decided in the last four seconds of the game. Unfortunately, the Ospreys weren’t the ones who emerged victorious in a 73-71 loss.

Carter  Hendricksen opened up the scoring for the game with a trey from the left wing.

The Bisons went on a 10-2 run early powered by a quick ten points from Ahsan Asadullah.

Lipscomb didn’t have much trouble sinking their shots, making 54 percent from the field throughout the first half.

The inside game was Lipscomb’s bread and butter with Asadullah scoring 20 points from the block which led to a 42-33 Bisons lead at the half.

“In the second half, we played the way we normally play,” Coach Driscoll said. “In the first half, we didn’t and we were grateful that the lead wasn’t larger.”

Ryan Burkhardt hit a dagger three from the corner for a 53-51 lead nine minutes into the second half. The junior in braids finished the game with nine points off the bench, all threes.

Both teams were scoring in bunches with eight minutes left as the Ospreys led, 61-60.

The tension continued to increase in the final minute of the game when Greg Jones tied the game at 69 on a three from the corner.

Hendricksen made a shot close to the rim with 55 seconds left to grab the 71-69 lead.

Asadullah countered with a layup to tie it at 71 with 41 seconds and the Ospreys squandered their chance to score on their next possession. Garrett Sams missed a three-pointer and despite a rebound from Aminu, Hendricksen couldn’t hit his jumper. With four seconds left, Asadullah fed an open Andrew Fleming for a floater to go in for the 73-71 lead. No timeout from UNF was called and Ivan Gandia-Rosa raced with the ball to the other side of the court but couldn’t hit his shot for the loss.

Wajid Aminu described the gravity of the game in front of a packed crowd at UNF Arena.

“Those are the types of moments you need to play for, you know every possession counts, the crowd is into it and it’s an amazing environment,” Aminu said. “Unfortunately, we didn’t come out with the win but I think we took our opportunity and did the best that we could.”

Asadullah and Fleming were the players of the game as the duo combined for 53 points.

Hendricksen led the Ospreys with 19 points and Aminu chipped in 15 of his own.

The Ospreys are officially eliminated from the ASUN Tournament but this might not be their final game of the season. There are other tournaments in March like the CBI or the CIT.