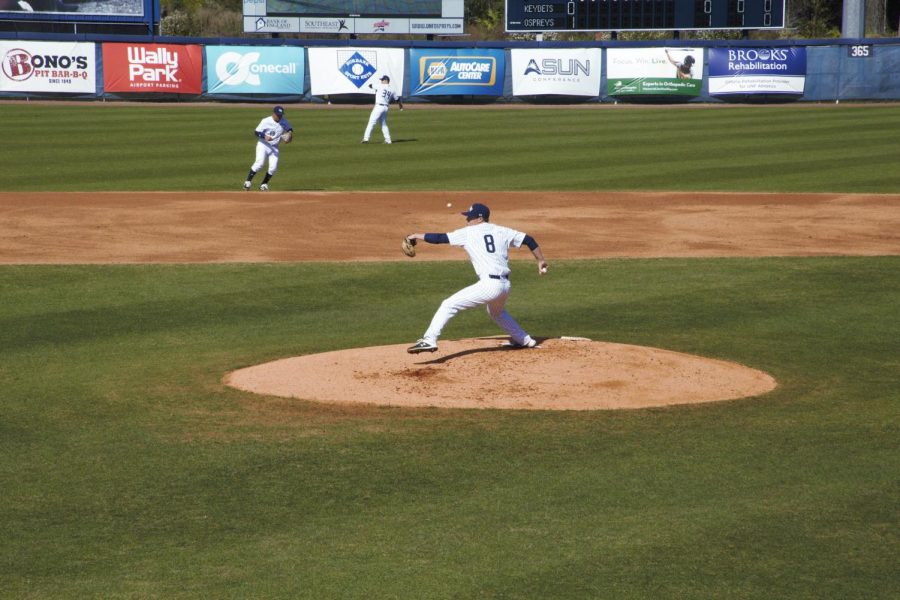 Brandon Reitz was cruising through with three hitless innings until he began laboring in the fourth.

With the bases loaded, Reitz plunked Chase Rollin to plate the first runner of the game. Zach Lechnir tacked on two more runs on a double to left for a 3-0 lead. In one of the more obscure scoring plays, the Chippewas plated two on back-to-back bunt singles for the 5-0 lead.

Reitz exited the game in the fourth and Zach Chappell came in relief. The first batter Chappell faced was Garrett Navarra and the sophomore dove in two more on a double to extend the lead to 7-0.

Those runs were all charged to Reitz, who finished with 3.1 innings of seven-run ball on five hits.

When the Ospreys came up to bat, Raff Libunao lifted a ball to right field for a solo homer to get the Ospreys on the board.

Chappell ran into more trouble in the fifth when he allowed five runs highlighted by a grand slam from Jakob Marsee to set the score at 12-1.

Despite the large deficit, the Ospreys continued to tack on more runs in the fifth with a pair of RBI singles from Blake Marabell and Libunao and a sacrifice fly from Abraham Sequera to cut the deficit to 12-4, Chippewas.

Jeslyn Whitehead had a strong outing in relief with four scoreless innings, allowing only three hits.

Sequera and Matthias scratched across two more runs on RBI singles in the final innings but it wasn’t enough in the 12-6 loss.

“Our guys battled to the end but we just couldn’t put the ball in play when we needed to,” UNF baseball head coach Tim Parenton said. “In the last couple innings, if we would have gotten a few more runs there, I thought they would have tightened up a little bit and it’d be a different ballgame.”

Marabell led the team with three hits while Sequera and Libunao combined for four RBI’s.

The Ospreys drop to 3-8 while the Chippewas improve to 7-5.

Both teams will square off in a twin bill on Saturday, March 7 with the first game starting at 1:05 p.m.