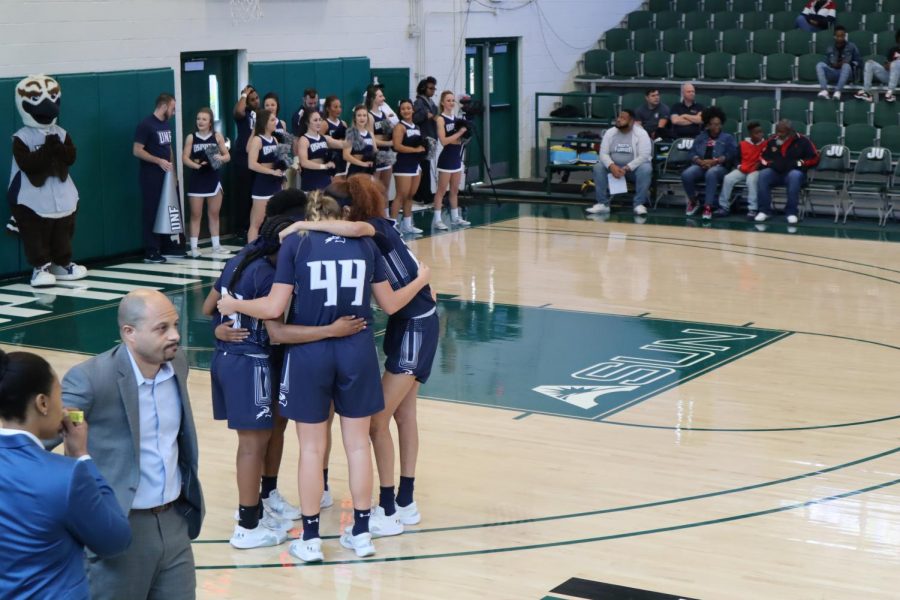 College basketball in the third month of the year is called March Madness for a reason. Sunday’s ASUN Quarterfinal game between the Jacksonville Dolphins and North Florida Ospreys highlighted the ups and downs, the triumph and heartbreak and the Madness of March.

The third volume of the River City Rumble was heavily contested right from the tip-off. When UNF pulled ahead with an 11-5 lead, the Dolphins came right back with a small run of their own, tying the game. Four first-quarter lead changes saw the Ospreys up 16-15 at the end of the first frame.

JU managed to pull away in the second quarter, going on a 16-4 run and taking a 30-20 lead with just over four minutes remaining until halftime. UNF went on a run of their own, scoring nine unanswered points to go into the locker room trailing by just one.

Jacksonville’s rebounding proved to be a problem for the Ospreys in the first half. UNF allowed eight offensive rebounds and seven points off rebounds through two periods.

Adrienne Jackson led the way for the Ospreys in the third quarter. The senior guard scored six of the team’s 13 points in the period with two three-pointers and the team led 42-41 at the end of the third.

The final stretch of regulation was just as close as hotly contested as the previous three quarters. A Jazz Bond three opened the high scoring fourth quarter.

Missing their leading scorer, Shakayla Nevitt, the Dolphins needed someone to step up when they were down late in the game. Freshman Da’Nasia Shaw answered the call. Shaw scored the last eight points for Jacksonville, including a surreal three pointer with two Ospreys draped over her to tie the game with 15 seconds on the clock and subsequently sending the game to overtime.

Free throws ultimately made the difference in the five-minute overtime period. The Ospreys hit nine of their 10 attempts while JU missed six of their eight. Jacksonville lagged behind and were forced to send a hot UNF team back to the line multiple times. When the clock struck zero, North Florida emerged victorious with a final score of 77-67.

The Ospreys’ two-way star, Jazz Bond, was the player of the game, however. The junior forward scored 25 points and recorded eight blocks on 61 percent shooting.

Da’Nasia Shaw shined for the Dolphins, scoring 19 points and tallying five rebounds. She was one of four Dolphins to hit double digits in points.

Rivalry games – especially in the playoffs – often result in gritty, physical matches. This was no exception as both teams left everything they had on the court. Hustle plays for loose balls can result in injury, as we saw twice in Sunday’s game.

Shaw, who was in the middle of a spectacular performance, fell awkwardly to the ground and remained there for quite some time in excruciating pain while clutching her knee. Victoria Patrick sat out several minutes after breaking her nose in a fight for the ball earlier in the game.

After a dismal stretch of games in February, North Florida’s women’s basketball team is finally back on a win streak after Sunday’s win and seem to have corrected course at the perfect time.

“I couldn’t be more proud of [the team] in reference to how resilient they were and have been all year,” Coach Gibbs said. “Today is a microcosm of our season in general.”

The Ospreys will be keeping a close watch on the rest of the ASUN games for the day and will know by the end of the night who they will face in the Semifinal on Wednesday.