Students feel UPD did not take reports seriously; UPD says “nothing could be further from the truth” 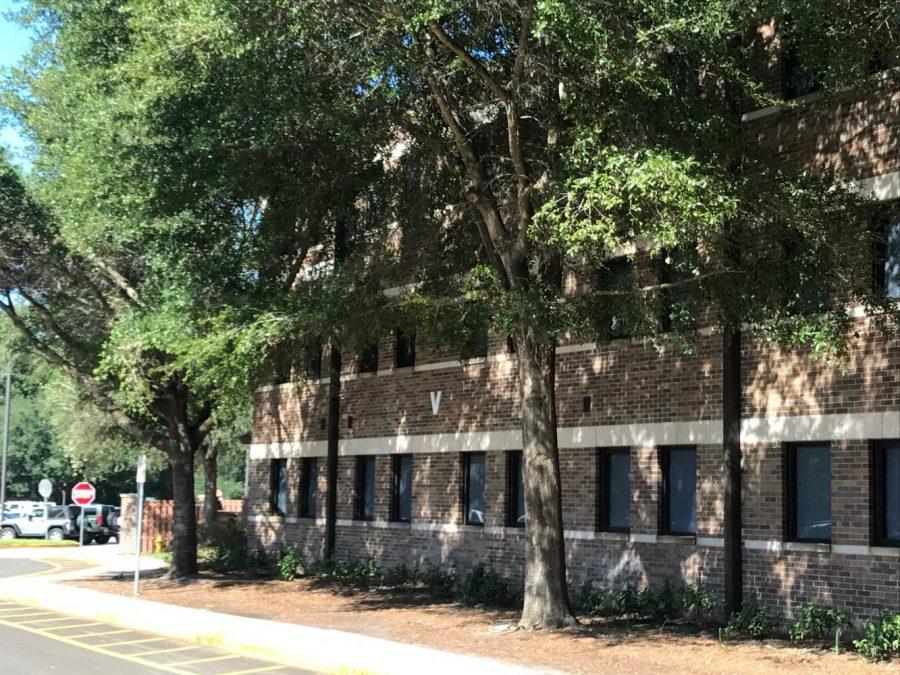 A shot was fired inside The Cove dorm, Building V this morning. Phot by Colin McCann

Some students in the Cove dormitories are expressing concerns over UPD’s handling of a noise complaint on Feb. 25. The noise complaint was initially reported as possible gunfire around 1 a.m.

Drake Zachman, a UNF Sophomore, reported hearing gunshots, purportedly calling the Clubhouse to see if they also heard the shots. The Clubhouse called an RA, who then called UPD.

Zachman was not the only student to hear the possible gunshots. Spinnaker knocked on doors in the area the alleged shots were heard, asking students if they heard any strange noises the night of Feb. 25. Around 5 students reported hearing a noise, though some weren’t sure what it was. One student speculated it may have been a car backfiring. Another said they heard something metallic striking against metal. Another affirmed that whatever they heard was not “an animal sound.”

However, those occupying corner rooms near the parking lot where the gunshots were thought to have come from said they didn’t hear anything. A student who was not present on the night in question said they heard second-hand that someone popped balloons in the courtyard that night.

“It was definitely a gunshot,” one student said. When asked if they thought it could have been a car backfiring, they said they were familiar with the sound of a car backfiring and that what they heard on Feb. 25 was not a car-related noise. The student also described the noise as coming from the courtyard area, not the parking lot.

One of the floors also had a Living-Learning Community (LLC) group chat. On the night the possible shots were heard, students messaged in the chat group asking others if they heard a what sounded like gunshots. Spinnaker was able to view the group chat and confirmed that at least three students on the floor heard the sound.

UPD confirmed a call was made regarding possible gunshots, but no police report was filed.

“They excused the noise as an owl, and claimed that college students ‘don’t know what gunshots sound like.’ I think as someone who has grown up in a neighborhood where gunfire was unfortunately common, I think I’d know the difference between gunfire and an owl. Not to mention, owls don’t sound like guns,” Zachman said in her original tip to Spinnaker.

According to UPD, a student on the scene attributed the noise to owls, not a UPD officer. The comment about college students being able to properly identify gunfire also did not come from a UPD officer, according to Chief Mackesy.

Zachman felt like UPD did not take her complaint seriously.

“Not only is this disrespectful, it also makes us feel like we aren’t in a safe environment if the police aren’t doing their job and lying to those they are failing to protect. We feel like this excuse was a blatant attempt to avoid responsibility. I now feel unsafe at night in my own dorm room because UPD has failed to give us the sense of safety we deserve.”

When told that students felt frustrated and believed UPD to have not handled the situation seriously, Chief Mackesy responded, “I’m sorry they are frustrated, but nothing could be further from the truth. We had three officers working and all three responded.”

“When the call was reported to UPD, an officer was sitting in the parking lot in the area of the building in question. He had been there for several minutes leading up to the call coming in to UPD and did not hear anything. When the call was dispatched, three officers responded to the area. None of them saw or heard anything unusual. It is important to note that none of the students who were out and about reported anything suspicious to the officers as they were walking the area on foot,” Chief Mackesy told Spinnaker.

“I am not sure what the student heard but we feel certain it was not gunshots,” he said. “If a gun had been fired outside three times on campus there is a really good possibility it would have been heard in numerous areas on campus and I feel certain would have resulted in additional calls to the UPD dispatch center.”

When asked on why a police report or incident report was not filed, UPD stated that it depends on the incident and that the UPD officers are trained and qualified to know if an incident requires a report.