A look back at the Birds of Trey’s historic season 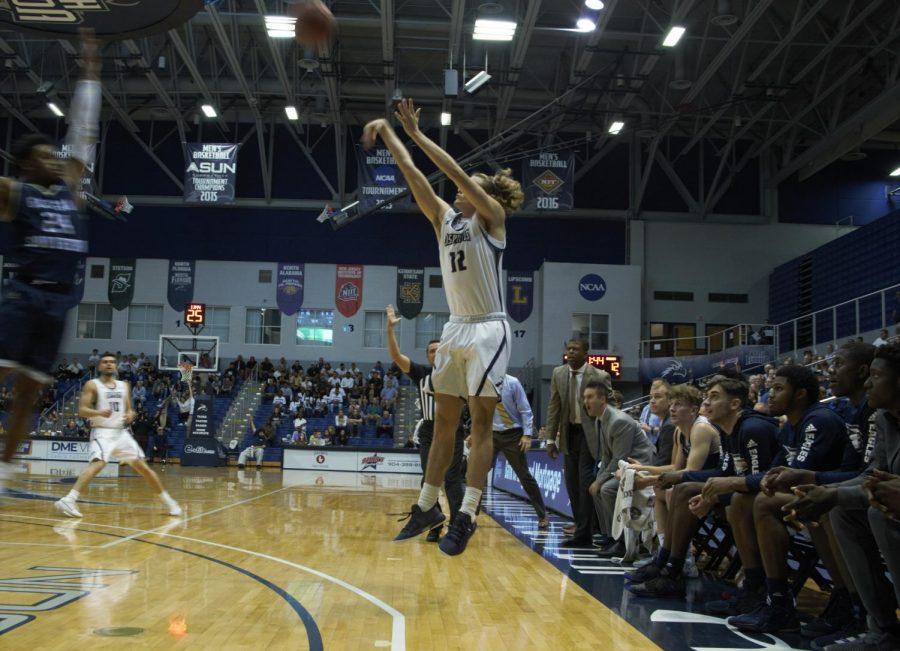 UNF men’s basketball head coach Matthew Driscoll has a routine every day when he goes to work.

“If it’s a non-lifting day, I’ll just get up and run, eat breakfast, grab Dunkin’ Donuts and I like to sit by the water whether it be at the Intracoastal or at the ocean because that’s where I like to watch video for the upcoming game,” Driscoll said.

When preparing for the games, Driscoll has a method to the madness that involves watching numerous hours of game footage, including his own team’s game twice.

Driscoll may run on Dunkin’ but the men’s basketball team ran on experience this season with four seniors as starters, finishing with a 21-12 record (13-3 ASUN) this season.

Driscoll reflected on the challenging non-conference schedule back in the 2017-18 season when Ivan Gandia-Rosa, Garrett Sams and Wajid Aminu played together for the first time and how that was an early sign of their expectations.

“The team began at Michigan State Friday, at Michigan Saturday, at VCU Monday and at Florida Thursday,” Driscoll said. “Welcome to the University of North Florida men’s basketball program and what the expectations are.”

When the 2019-20 season began, Driscoll instilled a new team motto: stay in your lane.

“Staying in your lane is about being who you are,” Driscoll said. “I think that constant mantra and that constant understanding of that aspect of our program really came into play once we got to the league.”

With a non-conference schedule that included Dayton, Florida State and Iowa among others, the Ospreys were battle tested going into ASUN play. The team’s worst loss was by 18 to Dayton, who was a projected one seed going into March Madness. The Flyers also had Obi Toppin, this year’s AP College Basketball Player of the Year with 20 points per game and shot 63 percent from the field.

“It’s kind of twofold, I’m not a moral victory guy, I’m just not one of those dudes,” Driscoll said. “I think it says a couple of things, it speaks volumes to the guys’ experience because they have played in those games so much. It says a lot more to their understanding of staying in their lanes and being themselves.”

In their first 10 games going into conference play, the Ospreys had a hot start with an 8-2 record.

“The biggest thing is that we never shied away from knowing who we were,” Driscoll said. “We know we’re a three-point shooting team, we knew we could make threes, we knew we had at least three guys and sometimes four or five guys on the floor who could make threes. I think we really embraced it, we shared it, and that’s why we were so dangerous.”

With the 13-2 record at home, this was a major turning point for student turnout at games.

“I think the administration, the school, their separation from us and why it occurred have become in the rear view mirror,” Driscoll said. “Now we’re looking out in the windshield which is a much bigger picture.”

The Ospreys finished the season strong, being crowned the ASUN Co-Champions with Liberty, each sharing a 13-3 record. After a thrilling 91-88 win over JU at home in the ASUN Quarterfinals, UNF faced Ahsan Asadullah and Andrew Fleming of the Lipscomb Bisons in the Semifinal. After the Bisons controlled the first half with a 42-33 lead, the Ospreys fired back on offense in the second half, leading 71-69 with less than a minute left in the game.

After Andrew Fleming made a floater with four seconds left in the game to grab a 73-71 lead, the Ospreys had one last chance to tie it or win the game but couldn’t get a shot up in time.

“You get the best shooter in the league a three at the top of the key, who is a senior, a walk-in perfect pass uncontested with JT Escobar next to him and Ivan next to him, you have to show me the statistics that say you should call time out,” Driscoll said. “It never crossed my mind.”

Despite the heartbreaking loss, the Ospreys had one of their best seasons in program history and six players earned postseason honors, including Driscoll as ASUN Co-Coach of the Year. UNF also led the NCAA in three-pointers made for the second time in program history with 391.

“Statistically, Garrett is top three in all-time scoring for UNF, Wajid leads the program in blocks and rebounds, Ivan leads in numerous categories and those three guys in particular want to play with professional aspirations,” Driscoll said. “The winning is a byproduct so you try to make them as great as they can be and the byproduct is that you reap the benefits of the wins.”

With the seniors gone, it’s the end of an era but brings in a new group of Ospreys looking to step up and continue the tradition of being one of the most lethal offenses in college basketball: The Birds of Trey.