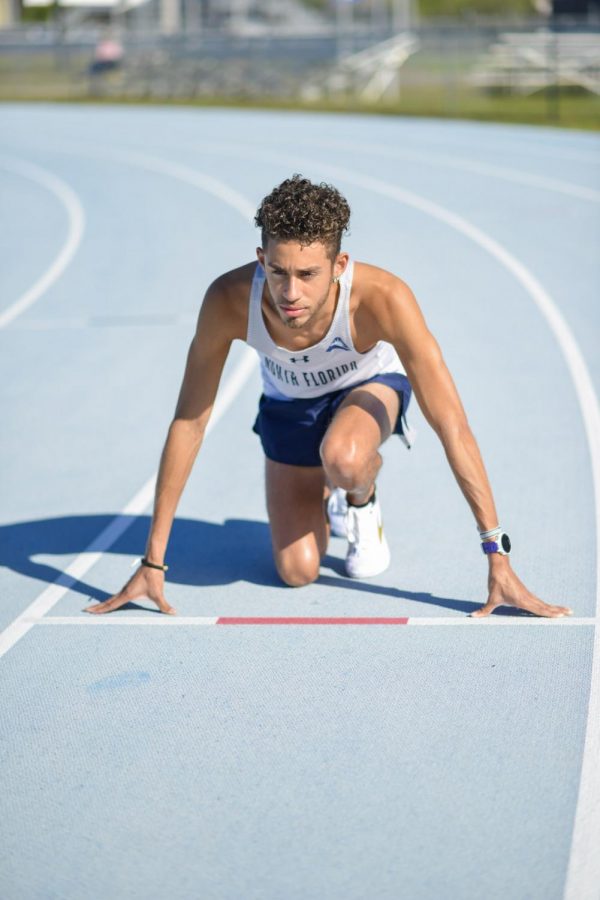 Back in middle school, Jared Vazquez would rather ball on the court than run relays. Fast forward to his junior year at UNF and Vazquez has one of the best mile times at UNF with 4:07.90.

Running can be a daunting sport but for Vazquez, it’s all about being stress free and trusting the process.

“When you just go out there and you’re stress free and you’re just like having fun…you’re eventually going to run a good race,” said Vazquez

In middle school, Vazquez primarily played basketball and running was just something he did up and down the court. It wasn’t until Vazquez dislocated his shoulder that he reluctantly decided to try running due to his fear of repeating his injury. Vazquez went to track and field tryouts and blew the coach away by finishing in second place and almost beating the fastest runner in the school. He started competing and gained early recognition of his talents from his high school coach.

As a freshman in high school, Vazquez trained with the varsity squad and began his passion for running. When his teammates graduated, his coach recognized his talents and began putting Vazquez on proper workouts and pushing him to get faster while also having fun.

He ended his high school career with a personal record mile time of 4:18.12 and as he entered college, his passion for running grew.

Vazquez had a shaky start to his college career as a stress fracture in his early freshman year kept him on the sidelines. Complications and miscommunication from doctors kept him out the entire track season, but Vazquez was able to compete as the cross country season arrived. Coming off an injury, his sophomore season started slow, but Vazquez caught steam as the season picked up and is now running faster than ever.

Now, Vazquez says he is mentally locked in and following necessary precaution to run fast while preventing injury.

“I’m just trying to do what I can and keep following the coaches process and listen to what the coach is telling me to do and follow my teammates and enjoy the experience,” said Vazquez.

At the Carolina Challenge in Columbia, South Carolina earlier this year, the junior set a new PR mile time with a 4:07.90 which earned him 4th place in the competition.

Vazquez’s constant improvement has garnered him as one of the rising stars on the team but he tries to stay humble throughout the whole process and the pressures of the race.

“I don’t really try to put too much pressure on myself… I just go, get a feel of the race, and I know what I’ve done,” said Vazquez. “I trust all of that so I know I’ll be able to perform at a high level when it’s needed.”

Vazquez says that through the ups and downs of college, his teammates have his back as they have been in his shoes before and have experienced injuries and setbacks as well.

In the casual relationship he has with his teammates, one nickname in particular has stood out to him and he tries to embrace it as “friendly competition”.

“For me, I have some scrawny legs and since middle school I’ve been called chicken legs,” joked Vazquez. “When (my teammates) call me chicken legs it’s never negative… it’s just for fun.”

While the friendly competition between his teammates will continue through the unexpectedly long offseason, Vazquez will certainly be back in his spikes for his upcoming senior season.

“I can’t wait to see what the future holds and after all this stuff, I hope to graduate with a nice PR,” said Vazquez.