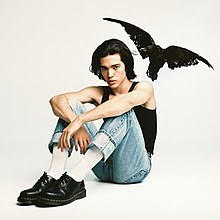 At only twenty-one years old, Conan Grey has taken on the social media and music industry by storm. Beginning his career as a YouTuber, he discovered a passion for music and began recording his own music in 2018. Quickly shooting to fame following the self-released single “Idle Town,” Gray participated in festival performances and opened for Panic! At the Disco’s Pray for the Wicked Tour in 2019. His debut album “Kid Krow” was subsequently released on March 20th, 2020.

Comfort Crowd: Starting off with soft vocals and bass acting as support, Gray discusses the woes of feeling alone in a new place. In an interview with “Paper,” he stated that this song was inspired by the loneliness he felt after moving to California for college. With a soaring chorus, Gray declares “I just needed someone around, I don’t care what song we play, or mess that we make, just company now…” Yet, it’s not necessarily a sad song — more so, a testament to the importance of friendships.

Wish You Were Sober: Track two examines the confusion most college students face when their love lives are tangled up within the party scene. Gray wonders if the interest in him is real, or if it’s merely fueled by alcohol; singing “kiss me in the seat of your Rover, real sweet, but I wish you were sober…”. The chorus is an ear-worm: dominated by drum machines and synthesizers, it’s an ideal song to blast in your car with the windows down.

Maniac: This song embodies the “modern” 1980s inspired music that’s been surging in pop and alternative music in the last few years. Over an urgent bedroom pop beat, Gray expresses frustration with an ex, singing “…tell them you hate me and dated me just for laughs, so why do you call me and tell me you want me back, you maniac”. A good song to add to your angry break-up playlist!

(Online Love): The first interlude off “Kid Krow,” Gray focuses on the struggles of being in an online relationship. Over quick guitar strums, he gently sings “…I can’t help but imagine what maybe could’ve happened if you weren’t just an online love.” In an era dominated by dating apps and social media, this 0:37 interlude is especially relevant.

Checkmate: If “Maniac” wasn’t enough to fulfill your angry break-up playlist, then this is another to add on. Slow-paced verses see Gray pointing out the games his ex played with him, immediately followed by an explosive chorus filled with electric guitars and proclamations like “Cry me a river till you drown in the lake, cause you may think you’re winning, but checkmate…no one’s ever gonna love you anyway.” Man, Conan. Who hurt you?

The Cut That Always Bleeds: With the structure reliant on just a guitar, slow drums, and vocals, this is the first track that Gray’s vocals truly shine in. The song focuses on that “one” person — the one you can’t get over, even though you have every reason to do so. It’s about the relationship you stay in (for probably too long) just with the slight hope that maybe it’ll get better with time. The sad truth, as Gray realizes in a skillful falsetto, is that he “can’t be your lover on a leash”. Somber and slow, this one should be added to your sad break-up playlist instead of the angry one.

Fight or Flight: This song made me laugh, for good reason. In Gray’s interview with Genius, he states that it’s supposed to be “this super chaotic, melodramatic song about finding out that someone has cheated on you…”. With lyrics like “this is looking like a crime scene, there’s clothes thrown on the balcony, and you smell like perfume out a magazine,” accompanied by increasingly loud guitars, Gray achieves the melodrama he was aspiring for.

Affluenza: A direct criticism of behaviors associated with money, Gray likens having wealth to a type of psychological despondency. Lyrics such as “wrecking daddy’s Benz” and “you threw a party but you kinda hate all your friends, so you’re crying in a driveway…,” Gray does not attempt to hide his disdain for the impacts money has on young people. Fueled by slow-burning synths and drumbeats, “Affluenza” is a humorous commentary with a strong point: money doesn’t buy happiness.

(Can We Be Friends?): The second interlude on the album, with a 0:58 running time, sees Gray singing over a slow guitar melody while desperately wanting to befriend someone. Friendship is a running theme in this album, exhibited in both this track and “Comfort Crowd”. A solid interlude, but it seems a little out of place at this point in the album.

Heather: A slow ballad reminiscent of Taylor Swift’s early releases, Gray agonizes over the one he’s in love with — who is in love with someone else. The rage towards Heather is evident in lyrics such as “How could I hate her, she’s such an angel, but then again, kinda wish she were dead…”. Yet, Gray almost immediately contradicts this by wishing he was her — all to appease his love interest. It’s an engaging take on unrequited love.

Little League: As the title suggests, “Little League” is a nostalgic longing for simpler times — the period of teen angst, getting by without a job, and no genuine responsibilities to worry about. It’s a subject I feel every college student can relate to: man, why did I want to grow up so badly when I was a kid? Out of all the songs on “Kid Krow,” I think this is the most relatable. Gray emphasizes the exigency nostalgia can carry, accompanied by urgent synths and soaring vocals in the chorus.

The Story: A stark contrast to the previous track, “The Story” is a bittersweet look at the tumultuous feelings that come with being a teenager. Gray recalls memories of his formative years: two teenagers who passed away due to suicide after being bullied, two gay teens being afraid to come out to each other and eventually grew apart due to this disconnect; plans to run away with his best friend. It’s a deep dive into Gray’s experiences outside of love, and makes him come across as much more introspective than previous tracks would suggest.

At only twenty-one years old, Conan Gray has solidified his place in the music industry as an indie-pop performer. With songwriting credits on all twelve tracks, his talent is undeniable — but with tracks spanning from soaring pop anthems to melodramatic ballads, it feels a little all over the place. The highlights of the album are his pure pop moments: tracks such as “Wish You Were Sober” and “Maniac” perfectly exhibit his knack for catchy choruses and unique lyrics. The ballads, while perfectly fine, are just…fine. It’s nothing that hasn’t been done before. With that being said, “Kid Krow” is a promising start to what Gray hopefully transforms into a full-fledged pop career.