Album review: “Nothing Happens” by Wallows 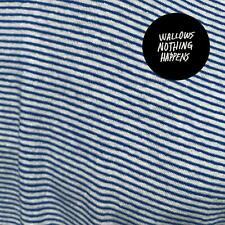 Only Friend: The introductory track to “Nothing Happens,” this song is an urgent call-to-action,

examining the loss of innocence. Characterized by polished guitar-work, dreamy synths, and

carefree vocals, the song invokes a sense of nostalgia and longing for a time where the

adulthood. It’s an amazing opener: it catches your attention so much that it’s inevitable you’ll be

intrigued as to what lies in store for the rest of the album.

Treacherous Doctor: This is one of those songs that sounds super happy and joyful…until you

take a look at the lyrics. It’s a stylistic choice in music I’m a huge fan of. The stark contrast

focusing on depression suggest an interesting metaphor for mental illness: you can go through

life pretending outwardly that everything is okay (the upbeat instrumentals), yet your mind can

be in a dark place (lyrics).

Sidelines: Somewhat of a filler track, Sidelines examines the stomach-dropping feeling most of

us have experienced when you see your ex in a new relationship after a rough breakup. It’s not

necessarily unique in terms of subject matter, but the instrumentals make up for this with heavy

emphasis on synths; supported by falsetto and catchy guitar riffs.

Are You Bored Yet? (feat. Clairo): One of the more relaxing tracks on “Nothing Happens,”

term relationships: are you getting tired of “us” yet? Smooth synths and crystal-clear vocals help

propel the song as both singers share their perspectives and fears that the other person is ready to move on from them. They fear it’s coming to an inevitable end, with brutally honest lyrics such as “Will you tell the truth so I don’t have to lie?”. Out of all the songs about relationships on this album, this one is the best: straight to the point and honest.

Scrawny: This track is reminiscent of something The Strokes could’ve easily released in the

confidence: whatever he says, you’re gonna believe it. “Scrawny” is one of the more light-

Ice Cold Pool: Thus far, the album has primarily focused on youth and transitioning from a

carefree period of life to adult responsibilities. “Ice Cold Pool” does not deviate from this trend,

of their youth. Another pro of this track? They incorporate horns! Instead of sticking to a

expands their horizons — and it pays off.

Worlds Apart: A slow-burning track: it begins with a simple beat, synths, and guitar riffs,

crescendoing up until the end with chaotic drums and repetitive, distorted riffs. Similar to its

predecessor tracks, “Worlds Apart” evokes a sense of nostalgia. Focusing primarily on a

relationship that presumably ended due to growing apart, rather than a big fall-out, Wallows

succeeds in describing the pain that accompanies a break-up in which nothing really went…wrong. It sounds like something that’d fit in beautifully on a Twin Peaks soundtrack.

What You Like: Transitioning directly from “Worlds Apart,” this track opens with steady drums

and bass guitar, as lead singer Dylan Minette realizes why his relationship is falling apart. That

is, until he decides to ask his partner: “Go ahead, tell me now what you like, maybe this time I’ll

listen…”. His vocals are notable as well. On previous tracks, Minette has stuck to a low, almost

monotonous style of singing — here, he steps out of his comfort zone and embraces his range. I

wish he had done this before reaching the end of the album! It’s one of the better tracks on the

album and shows his versatility as a vocalist.

Remember When: For fans of Two Door Cinema Club, this track is the one for you. Pulsating

synths, bouncy guitars, and urgent vocals shape this into a fun and danceable track. While the

well, the instrumentals and production are what genuinely make this track shine. From stacked

and distorted vocals showcasing flexible ranges to layered synths, drums, and guitars, it’s one of the many standout tracks on the album.

I’m Full: I’m a sucker for songs that immediately start off with a bang. Opening up with

increasingly loud, distorted guitars and chaotic synths, the instrumentals help showcase Minette’s talent as a vocalist. Embracing his range once more, he nearly screams: “I’m tired of the disadvantage, holding on for something alright”. Additionally, the song touches on issues of

substance abuse as a coping mechanism. For an album that has primarily touched on

relationships, “I’m Full” shows that they have the potential to expand their horizons and embrace

Do Not Wait: Wallows sends listeners off with a versatile 6:31 minute track, unusual for most

bands in the indie/alt genre. With nothing but slow synths and Minette’s vocals for the first three

minutes, the lyrics encompass the overarching theme of the album: alienation from your youth.

It’s a nostalgia trip — Minette sings to his younger self, saying “it gets worse before it gets

better, that’s one thing that I have come to know, just so you know”. As the track takes a turn,

Wallows incorporates soaring synths and hazy vocals, accompanied by a chant of “do not wait,

do not wait, do not wait, I’ll be there…”. Though it’s a trope arguably overdone in alternative

genuinely believe in what he’s saying.

and transforms it into their own definition of what it means to be an indie band. Taking cues

from bands like The Strokes, Wallows has created an extremely solid debut album with catchy

hooks, innovative use of synths and distortion, and relevant lyricism. Yet, the band plays it safe.

The first half of the album is nothing particularly phenomenal or new — in the second half,

however, Wallows shines when they embrace more experimentation. If this is just their debut

album, I can’t wait to see what they have in store for the next. 4/5 Sails