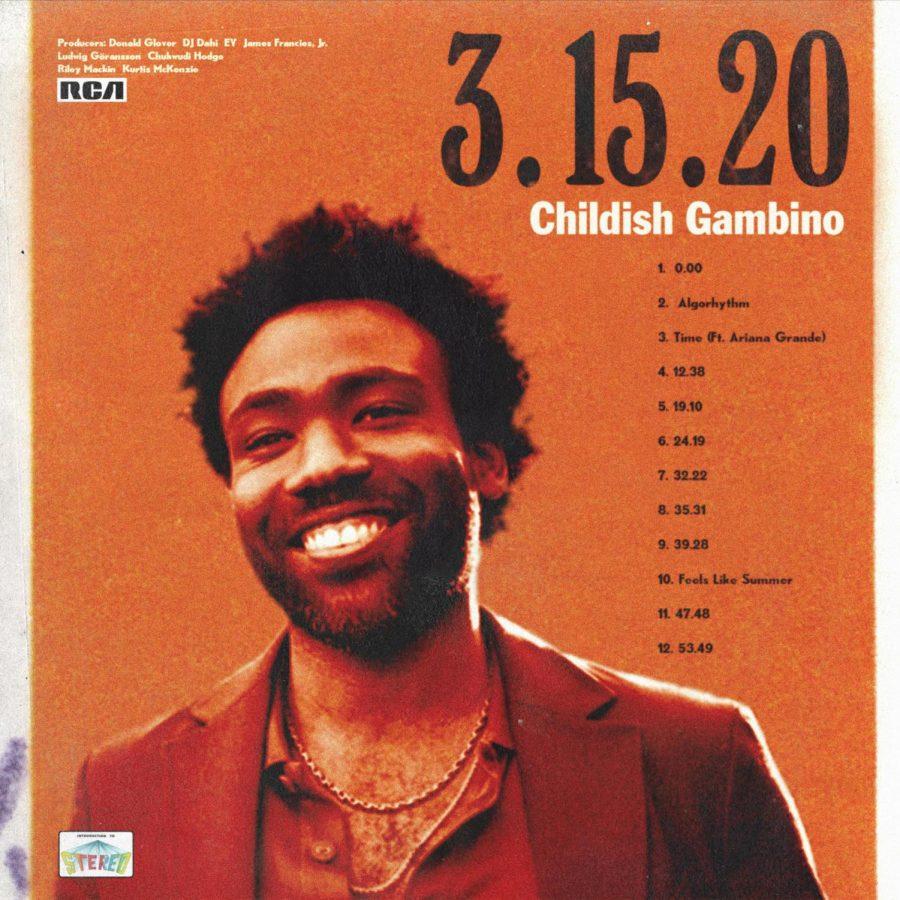 3.15.20 is the fourth studio album by rapper Donald Glover, AKA Childish Gambino. After initially being uploaded onto his website, only to be taken down hours later and re-released on streaming services a week later, the album has resonated with listeners and critics alike.

For this review, I have decided to collaborate with a co-worker and fellow DJ, Carissa Marques. She has taken on the even-numbered tracks; I have reviewed the odd tracks.

Sydney: So, Carissa, what did you think?

Carissa: Honestly, I liked it more than I anticipated. I haven’t listened to Childish Gambino in a minute, so in a way it was sort of nostalgic.

Sydney: Agreed! I haven’t since high school, so it was interesting to see how he has evolved as an artist and changed his style since the release of Before the Internet and Awaken, My Love!.

Carissa: If I remember correctly, Before the Internet was definitely more rap-centered, right?

Sydney: Yes! I like that in this album, he takes a lot of inspiration from artists like Prince. I didn’t see that influence as being prominent on earlier releases.

Carissa: For sure, I think lots of artists are drawing inspiration from oldies these days. It’s interesting to listen to their interpretations of combining old sounds with new technology. Anyways, what was your favorite track?

Sydney: I really liked “32.22”. It’s so different from anything he’s ever released, and I loved the influences he pulled from industrial music. It’s so cool to me when an artist combines their genre with another that’s totally out of left field – but he pulls it off.

Carissa: It was incredible! I’m looking forward to seeing all the dances people come up with after listening to this album. My best friend is a dancer, and I could totally picture some of these songs being great for hip-hop choreography. I think my favorite is just before yours though, “24.19”. I’m a sucker for love songs.

Sydney: Agreed! So out of 5, how many Spinnaker Sails would you give the album, 1 being the worst and 5 being amazing?

Carissa: Okay, so I know we’ll probably have different answers, but because of his powerful lyrics and message throughout the album, I’m going to have to give this one a 3.75

Sydney: I think it’s a solid 3.5 for me. It’s not what I typically listen to, but I really respect his growth as an artist and the powerful lyrics he presents in this album. My one main concern is that it feels a little too “all over the place”. I feel like if the tracks were rearranged, the album would have a more consistent flow to it.

Carissa: I do appreciate him changing the names of the songs to timestamps though that way people would listen to the album as a story. I think a good take away from this album, especially during times like these, is to continue loving others and yourself no matter the situation!

Sydney: Agreed. Thanks for reviewing with me!