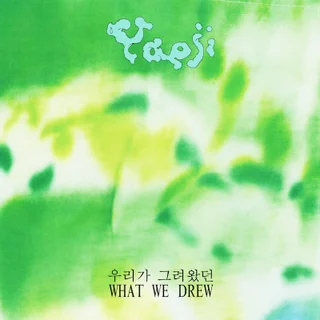 WHAT WE DREW 우리가 그려왔던 (We’ve Been Drawing) is Yaeji’s first full-length album, but she likes to refer to this project as a mixtape since each track closely resembles a diary entry. Kathy Yaeji Lee, whose stage name is Yaeji, is a Korean-American artist from New York. She grew up moving from place to place, spending time in South Korea, Atlanta and her college days in Pittsburgh. Her music career started when she became a DJ for her college radio station. (How fitting, now we’re a college radio station writing about her!) Yaeji now produces her own music, and you can hear her Korean and English lyrics in this house-music meets underground EDM album.

MY IMAGINATION 상상 – The opening track of the album starts with a deep bass sound layered with slow synths and an electronic voice singing in Korean. The lyrics have yet to be released, so unfortunately I cannot provide a translation. The track is slow and steady, transporting the listener to feel as if they’re floating off into outer space.

WHAT WE DREW 우리가 그려왔던 – This is the song the album was named after. The second track on the album has more of a bright sound. It starts with a catchy tune being hummed and then flows into Yaeji’s light and airy vocals. The song has a sweet message of honoring those that helped her get to the point where she is in her life today. She talks about how she was able to create a world where she finally feels like she belongs with those she loves.

IN PLACE 그 자리 그대로 – I could not find a single English translation for this song, so I will describe it based on its sound. This song follows the light and airy vibes previously displayed in “WHAT WE DREW 우리가 그려왔던”, except halfway through the song, a robotic-sounding voice starts chanting a refrain. I’m looking forward to finding out more about a few of the songs on this album once translations come out.

WHEN I GROW UP – Yaeji starts the song by singing “Ahem, one two, testing, one two,” in English, a phrase that is repeated throughout the song. She switches from Korean to English throughout the song and sings about the fears of growing up and how being an adult requires more concrete decision making. The song has a fun light beat with soft cymbals and electronic sounds. This track was featured on Spotify’s “All New Indie” playlist for the week of April 6, 2020.

MONEY CAN’T BUY – This is the first track on the album that features the first collaborator, Nappy Nina, a rapper and emcee from the Bay Area. The mood of the album switches from the light and airy beats to harder trap beats in this song. The versatility in this album is admirable, especially since Yaeji does it in a way where it all fits together. This song talks about wanting to get to know someone, something that money can’t buy. I like the cheap date ideas that Yaeji sings about in both Korean and English, one of them being just, “eating rice.” She also repeats, “We’ll laugh with each other and show one another what it’s like to share love with each other,” something so simple, but an experience cherished and necessary between human beings. I appreciate the lyric rapped by Nappy Nina, “So here I am, love me or leave me I am how you see me.” It reinforces that one does not need to change for someone they’re interested in, whether it’s a friendship or relationship.

FREE INTERLUDE – This song features Sweet Pea, Trenchcoat and Lil Fayo. Yaeji likes incorporating her friends from Brooklyn into her music, since they frequently collaborate at the parties she throws in Brooklyn for the underground house-music scene. I find this song to be a sort of filler. It sounds close to most Western EDM music.

SPELL 주문 – This song switches from Japanese to Korean to English with collaborators YonYon and G.L.A.M. It’s upbeat and definitely gives off enchanting techno vibes. The song talks about knowing one’s worth even in the midst of changing times.

WAKING UP DOWN – This is probably one of my favorite tracks on the album. Yaeji lists monotonous daily tasks over a bright electric beat, “I got waking up down / I got cooking down / I got making a list and checking down / I got hydrating down / I got listening down / I got you and me and we’re also down.” The Korean chorus sings of how life isn’t easy, reinforcing the message that it’s okay to be proud of accomplishing the little tasks in life.

IN THE MIRROR 거울 – The ninth track on the album has a hazy and static-filled sound. Yaeji layers her soft melodic Korean lyrics with a hard trap beat. She discusses how she doesn’t always feel like the way she presents herself, “when I look in the mirror.”

THE TH1NG – This is the last collaborative track on the album, featuring Shy One and Victoria Sin. The song sounds like it belongs in a journey to outer space. It doesn’t have much singing, rather an introspective dialog questioning whether everyone is the same and how we become unique separate beings.

THESE DAYS 요즘 – This song layers EDM beats with a bit of a jazzy undertone. The phrase “these days” is repeatedly sung by Yaeji throughout the song. Once in the middle of the song she states in Korean, “But I wonder, I’m still curious.” It works as a good transition from the dialog heavy track “THE TH1NG” to the song’s last track, “NEVER SETTLING DOWN.” If you’re familiar with Spotify’s “genre-less” playlist “Pollen”, this song sort of matches those vibes, as it was featured on it for the week of April 6, 2020.

NEVER SETTLING DOWN – The twelfth and final track of the song finishes with a dreamy electronic beat. Yaeji sings of not admitting to suppressing feelings for someone she once loved, which leaves the listener wondering if this album was a way to express some of those hidden emotions.

It was an interesting new experience to review an album from a genre I normally don’t listen to. Typically, if you were to ask me to listen to EDM, I would automatically turn it down, but Yaeji’s take on the genre lessened my negative feelings toward it. If you like Frank Ocean’s newer music like “DHL” or “In My Room”, I’d give Yaeji a listen. She’s also been compared to Grimes, and has collaborated with Charlie XCX. I would venture to say this album gave me similar vibes to FKA Twigs. Yaeji is by no means a typical K-pop artist, but she brings diversity to the West’s view of the Korean music scene. There’s one quote from an interview she had with The Fader that I feel sums up her mission pretty well. Yaeji states, “I want to give a platform to all the people who really deserve it but didn’t get a chance or were marginalized,” (https://www.thefader.com/2018/06/05/yaeji-cover-story). I feel like this is one of the reasons she includes so many small DJs and artists on WHAT WE DREW 우리가 그려왔던. Yaeji is an artist to follow who is paving the way for underrepresented groups in the music industry, specifically house-music and other electronic genres. For those that like those genres, I would rate this album a three out of five Spinnaker Sails.