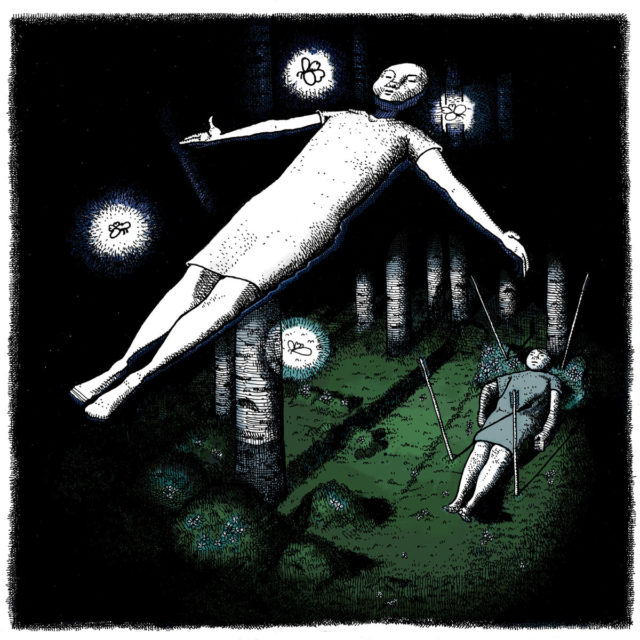 I was shown the song “Digger” from this album by our Music Director, Noah. I remember vividly he said to me, “hey, come listen to this awesome song,” so I did and we so into it. I actually had it on repeat for about a week after that. It wasn’t until a few months later I listened to the “Four of Arrows” album. I think what really drew me into the album was nostalgia. It reminded me of the music I would listen to in high school: the indie rock with female-led vocals that just resonated with me at a mere age of sixteen. I personally have strong emotions to this album — it just hits home in a different way than most to me. — Emma Finnegan

Dark Green Water: The opening track of “Four of Arrows” opens up with “Dark Green Water,” a grunge-inspired track featuring dramatic vocals and lyrics focusing on growth and forgiveness. The track sets an inspirational tone for the rest of the album to follow, with lyrics such as “mistakes were made and that’s the heart of this pain, but I’ll reflect, I won’t ask anything but forgiveness once I have the courage to explain” encouraging growth and acknowledging past regrets.
Digger: When I first heard this song playing on Spinnaker Radio, I was taken aback by the wailing vocals of lead singer Alex Menne. When she wails “That’s why I hate you…that’s why I love you…,” I immediately thought back to vocalists like Dolores O’Riordan of The Cranberries. The track itself is one of the strongest on “Four of Arrows,” notable for its dynamic instrumentals: beginning with just an acoustic guitar and soft-spoken vocals, “Digger” soon crescendoes up to intense, demanding guitars and nearly screamed vocals.
English Garden: One of the calmer tracks on “Four of Arrows,” “English Garden” features the pluck of a banjo, fragile vocals from Menne, and a violin that invokes an aura of nostalgia. The lyrics are especially strong on this track. Lines such as “left on read and did the dishes, been waiting for this, euphoria impregnates perfect sadness” perfectly reflect the frustration and impatience that often comes along with attempting to date in a digital-tinged world.
Mono no Aware: Great Grandpa has established a skillful knack for creative lyricism that allows listeners to picture the scene in their mind — especially evident in track four. Lyrics like “the other half lost to the void like the feeling I had back then, do you feel this same thing that I do?” illustrate Menne’s awareness of the passing of time and the longing she holds for better memories. It’s a slow-burning track, supported by occasional distortion and backing piano.
Bloom: One of the more uplifting tracks on “Four of Arrows,” “Bloom” is an inspirational call to action. Menne encourages listeners to “let your spirit bloom, step into whatever you want to” and take control of their own life. The music reflects this sentiment, with chiming guitars, uplifting vocals, and the implementation of a violin.
Endling: The interlude of the album is a slow, somber piano track. It’s a mix of both major and minor chords, possibly intentional in order to reflect into the album’s overarching theme of exploring the highs and lows in life. I can picture this interlude fitting in perfectly on a Radiohead album.
Rosalie: Easily one of the darkest tracks on the album. “Rosalie” examines the story of a single mother who is slowly becoming overwhelmed with the everyday simplicities of her life. Lyrics like “Home like a TV sitcom and her kids in the car” are juxtaposed against “odd things, throw the cereal on the ceiling, stretched screams, swollen speech, void of meaning…,” possibly alluding to postpartum depression or dementia.
Treat Jar: Easily the catchiest track off “Four of Arrows”. Here, Great Grandpa embraces their finely tuned pop sensibilities and offer up a glittering, alternative-pop track detailing the frustrations of trying to help someone who doesn’t want your assistance. The track is characterized by chiming guitars and impactful, simplistic lyrics such as “you’re gonna have to make your own coffee, and I can’t help you if I can’t help myself”.
Human Condition: I wouldn’t be surprised to see this track on a Phoebe Bridgers album — Menne’s vocals are smooth, delicate, and crystal-clear. The lyrics focus on the human condition, specifically how “living is hard, hard work,” and the slow, somber instrumentals serve to create an aura of moodiness. More so of a filler track than anything else, but Menne’s vocals are the highlight of the song.
Split Up The Kids: One of the many somber, upsetting tracks on “Four of Arrows,” “Split Up The Kids” primarily focuses on a dissolving family. Lyrics such as “go with your mother, a better house, new dad and bigger town” seem to suggest a divorce in the family, whereas “before his open coffin, grandma stands besides the fifty years she left behind, sadness holds me tighter, seeing them together just one time” examines the pain that comes alongside losing a loved one. It’s impactful in its delivery, with soft-spoken vocals and slow acoustic strumming.
Mostly Here: The dreamiest track on the album sees Great Grandpa embracing Cocteau Twins-esque vocals, synthesizers, and distorted guitars. It’s a welcome change from the slower-paced songs that mostly comprised the second half of “Four of Arrows”. Lyrically, it’s confusing. I can’t really understand what the song is actually supposed to be about, but the dynamic and engaging instrumentals make up for that.

“Four of Arrows” is an upsetting album. That’s not necessarily a bad thing — music helps individuals cope with difficult situations, and it’s refreshing to hear a band tackle on other subjects besides writing love songs. Menne’s vocals are beautiful, especially paired with dynamic, grunge-inspired instrumentals. However, I will present “Four of Arrows” with one warning: prepare to be emotionally drained. 3/5 Spinnaker Sails.