A look back at the Ospreys’ ASUN Quarterfinal win against JU 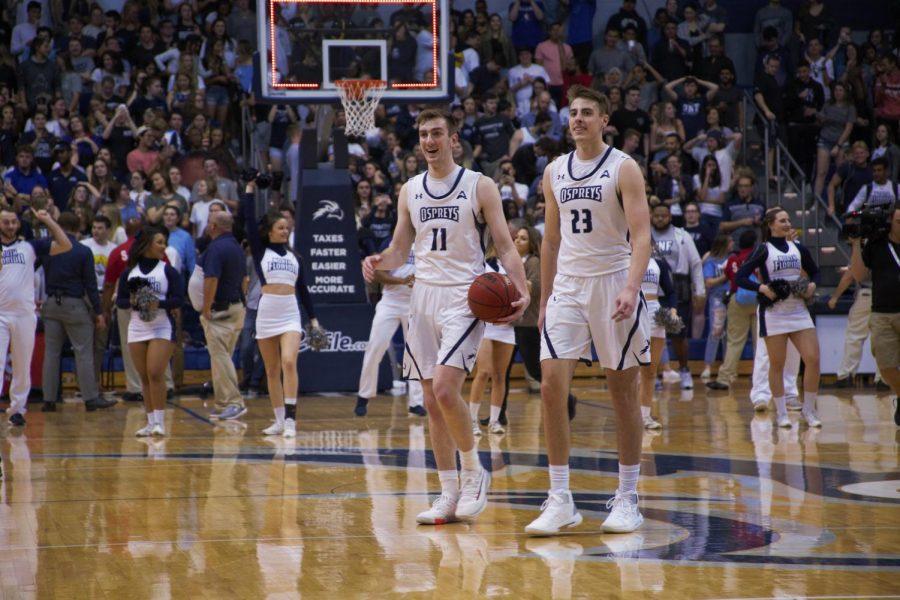 With the second seed in the ASUN playoffs, the senior-laden Ospreys team were poised to make a deep postseason run and even win the conference tournament to punch a ticket to the NCAA Tournament. That team was going through that process one game at a time.

“Survive and advance” is the mantra Coach Driscoll (among other coaches) uses to aptly portray the nature of the beast that is postseason college basketball. The experienced Birds of Trey already knew this; the entire starting lineup which featured four seniors had been in this scenario before.

When the regular season was all said and done and the tournament seeding was finalized, the matchup was set: UNF vs. JU.

At that moment, the stakes were raised: this was more than just a playoff game. The stars aligned to rehash the decades-old rivalry between the Ospreys and their natural prey: the Dolphins. This was the River City Rumble, Volume III.

North Florida had already defeated Jacksonville twice in the regular season. Once is happenstance, twice is coincidence. But a third win would assert UNF’s dominance over JU and prove that they were the best basketball team in Jacksonville.

A packed UNF arena was excited to cheer their team on. After some early turnovers from both teams likely caused by playoff jitters, Carter Hendricksen got the Ospreys on the board first with a three-pointer – the first of 12 for the Birds of Trey.

“There are sometimes where as soon as I catch the ball, I know that when I shoot, I just know it’s gonna go in,” Hendricksen said. The sophomore tied with Garrett Sams as the Ospreys’ leading scorers that night, each scoring 21 points.

The crowd erupted when the Ospreys hit back-to-back threes to bring the Dolphins’ early seven-point lead down to just one. This highlighted the back-and-forth first half which featured 10 lead changes and six ties. The Ospreys went into halftime leading by five.

The second twenty-minute period was not as hotly contested as the first half. UNF never gave up their lead and even pulled ahead by as many as 13 points. JU made up for it by providing drama late in the game.

The Dolphins’ Destin Barnes was determined to not lose. A barrage of threes towards the end of the game left fans speechless. He could not miss even with multiple hands in his face occasionally.

Barnes even willed in a three-quarter court bomb at the final buzzer which left everyone inside UNF Arena  in disbelief.

“Me and Garrett, after he hit the 60-foot bomb at the end of the game, we just started laughing,” Hendricksen said. “This dude was just not going to miss.”

He scored 13 of the team’s 15 points in the final two minutes to bring Jacksonville to within three points as the clock expired.

The Ospreys would go on to the semifinal, where they would suffer heartbreak to the Lipscomb Bisons. However, this final win of the Birds of Trey’s season was a memorable one.