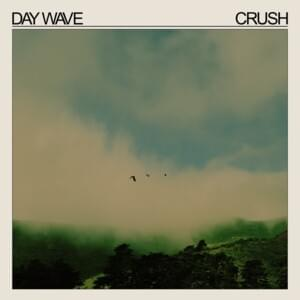 Day Wave is an indie rock band from California that started in the mid 2010s. Jackson Phillip is the lead singer, and producer of their latest EP, Crush. The EP has surf rock vibes that tells the story of the stages of a crush. It was released on April 24, 2020.

Starting Again – The opening track of the EP was released as a single in late February of 2020. It’s got a welcoming start with an upbeat melody. Phillip sings about finally being comfortable with being alone, but not liking when others point it out to him. I think this song is great for expressing that process of growth and healing where you’re still a little bit scared, but want to make progress on your own terms and not be rushed by others.
Potions – This second track continues with the upbeat surf rock sound from the previous song. It’s got a little more edgy guitar throughout the bridge. The song talks about how having a crush can be like a magic potion, making the consumer feel worse than before. I like the metaphor of a potion because sometimes you just have to allow the little things in life feel magical, even if it is just a stupid crush.
Empty – I think this song talks about not being ready for a relationship. Phillip talks about feeling empty, “but I don’t want you feeling the same”. He may not be ready, but wants something to work out in the future between him and a love interest.
Crush – The final track is slower and talks about the sad truth of a dying crush. Phillips realizes that things would never work out despite, “you and I aren’t so different at all”. Even though there are some synths in the song, it sounds more gentle and acoustic than the rest of the EP.

Like this EP, a crush can be short lived, yet filled with so much life. In just a short amount of time Phillip does a great job of conveying a gradient of emotions. I really like the surf rock vibes, especially since summer is just around the corner. I would rate this EP a 3.5 out of 5 Spinnaker Sails.