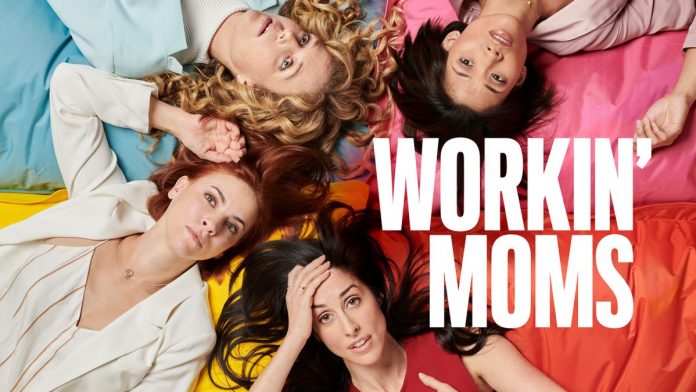 Workin’ Moms is a Netflix original show that has never been afraid to push boundaries and discuss taboo topics. But did its latest season hold up compared to the previous ones?

The short answer would be no. The content itself was interesting and at many times hilarious, but with this seasons run coming to 8 episodes instead of the usual 13, it can be hard to tackle larger issues while also moving the plot forward.

Much like the previous seasons, this season follows the lives of Kate, Anne, Frankie, and Jenny as they try to navigate motherhood in their own unique situations. Season 4’s opening episode “Charade” answers the question that season 3’s finale left: will Kate return to her cheating husband or start a new romance with a handsome coworker?

This decision comes as no surprise, but it still stings. Kate is a strong woman, why would she go back to a cheater?

However, her decision seems more and more reasonable as the season progresses, and the handsome coworker, Mike, turns out to be an alcoholic man-baby who seeks to ruin the company Kate has worked hard to create.

As the season progresses, I find that Kate is indeed a strong woman, and her going back to her cheating husband shows that. Kate faces much judgment from her friends for staying with her husband, yet she sticks to her guns while continuing to respect herself.

While all of this is happening, Anne continues to try to discipline her wild-child daughter to no avail. At the beginning of the season, Anne is so confident that her discipline is effective that she pitches a book idea on the topic, and a publisher actually picks it up. However, we soon find out that Anne’s discipline isn’t as effective as she hoped.

Alice’s storyline has always been my favorite throughout the show. Alice and Anne constantly butt heads throughout the show, usually due to Alice trying at act a lot older than she actually is. This storyline tackles how frustrating it can be to want the best for your child, yet have them deny you completely. Raising a teenager can be terrifying, and Workin’ Moms proves just that.

Jenny and Frankie’s storylines offer a lot less substance, which was frustrating, as Frankie is one of the show’s most interesting characters. Jenny, however, was left largely forgotten in season 3, so I was not expecting much from her this season. At the very least, this season shows that Jenny actively sees her daughter. This was a bit surprising, as the previous season explored Jenny’s disdain for being a mother. A new romantic interest is also introduced for Jenny, which is expected to be explored in a future season.

Frankie is still romantically involved with Bianca, a rather confusing character. She is a lesbian, but also a devout Christian. She decided to have a baby by herself, and this season explores how Frankie fits in in Bianca’s new life endeavor. There is an unfortunate lack of Rhoda, Frankie’s daughter with her ex-wife, in this season, which is disappointing.

All in all, this season was great but didn’t offer much in terms of moving the story along. However, it was recently announced that the show was renewed for a fifth season, so I am excited to see where that takes our four workin’ moms.