Technicality brings Jax HRO back to the negotiating table 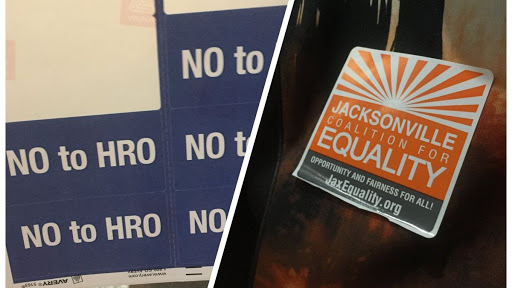 In 2017 the Jacksonville City Council approved a measure stating that anti-discrimination laws for the city would be amended to include sexual orientation, gender expression and gender identity under a new Human Rights Ordinance, or HRO. The bill was passed 12-6 in a sweeping victory after several years of painful struggle.

According to Gallup Survey data, Jacksonville is one of the nation’s major metropolitan areas with a high concentration of LGBTQ residents, coming in at 4.3%. An additional survey done by the Human Rights Campaign found UNF to be among the top ‘LGBTQ Friendly Campuses’ in the nation, coming in at 21 out of 69 campuses.

For the LGBTQ community and its supporters, the HRO inclusion bill was a huge win. In the realm of housing, jobs and day to day life, members of this community would now legally be protected from discrimination against them.

“I thought this bill was such a huge stepping point in the Jacksonville queer community,” said Jacksonville resident and member of the LGBTQ community, Graciela Cain. “I was downtown in 2017 celebrating with such a huge crowd when it got passed, it was a huge dance party.”

The opposition to this bill came largely from Liberty Counsel, a christian, non-profit organization that provides legal support to people around issues of religious liberty, the sanctity of life and the family.  For them, this bill passing represented a significant loss.

“These sorts of laws can be very harmful to business owners, dragging them through lengthy legal proceedings” Assistant Vice President of Legal Affairs for Liberty Counsel, and UNF alumni, Roger Gannam said. “They lie and wait to be used as a sword against people who want to run their businesses in a way that fits their beliefs.”

Within 3-months of passing, Liberty Counsel filed suit against the ordinance under the premise that the full document had not been disclosed and therefore it had not been ratified and was therefore unenforceable, or essentially void.

The original suit was rejected twice. In the first instance, the plaintiffs were allowed to amend their suit to address the court’s questions. In the second, the suit was “dismissed with prejudice,” which means that the judge found the action to be essentially without merit.

But on Friday May 1st, nearly three years after the bill passed, a three-judge panel with Florida’s First District Court of Appeals ruled in favor of Liberty Counsel on the grounds of a technicality in the execution of the bill.

It is worth noting that the court approved the suit only in regards to technical requirements of the bill, not the actual content of the bill itself.

For more clarification, while the 2017 bill was agreed to be generally clear and outlined how and where it would have influence in the existing ordinance and the details of this were made available widely, the bill itself lacked that level of detail within the document that was officially passed. This level of specificity is a requirement and therein lie the grounds for dispute.

The plaintiffs argued that in essence, the lack of that specific formatting within the ordinance compromised people’s ability to understand and abide by it.

Gannam further suggested that the HRO bill puts an ‘unfair burden’ on Jacksonville business owners to discern qualities about people that are ‘subjective not objective.’ He stated that the inclusion of sexual orientation and gender identity into non-discrimination law forced business owners to make a choice to observe their conscience or violate their conscience to avoid potential liability.

“This (bill) isn’t about being offensive or hurting someone’s feelings,” Co-Founder of the Jacksonville Coalition for Equality, Jimmy Midyette said. “This is about protecting people who otherwise have no protections in their ability to conduct their lives without discrimination. This inclusion doesn’t hurt small business any more than the existing anti-discrimination laws.”

The City of Jacksonville had a few options once the suit was approved by the Court of Appeals. They could do nothing and let the bill die which would remove protections for the LGBTQ community, they could continue to fight in court for the passage of the 2017 bill, or they could draft a new bill, making sure to fix the issues that were pointed out by the court.

The City decided to draft a new bill. One that is for all intents and purposes identical to the bill that passed in 2017.

According to Midyette, while there are differing opinions on what the new bill should include, the Coalition has decided, “there should be no changes with this particular bill – there is existing law that is working, some people want to add more protections, opponents want less, our strategy is let’s keep what we had and make sure to dot the i’s and cross t’s this time.”

Right now the new HRO bill, 2020-244, has made it through the first round of City Council reading and will be open to public discourse at the town hall meeting Tuesday May 26th. This will be a Zoom meeting and all community members on either side of the issue are able to attend.

After this meeting there will be two more reviews by council members, additional time for public discourse via Zoom, and the bill will be put to a vote. Currently the anticipated timeline would have the bill up for vote at the June 9th council meeting.

Midyette is optimistic that, despite some new faces on city council, the bill will have another landslide win.

“I’d say we have 14 or 15 council members who are supportive,” Midyette said. “Councilman Bowman contacted me almost immediately after the news broke on May 1st saying they wanted to make this right.”

Opponents of the bill have stated if the new bill passes they will review it to see if Jacksonville businesses have reason to challenge it and that “Liberty Counsel would talk with anyone who has a complaint filed on them due to the ordinance.” According to Gannam “Jacksonville is better off without it (HRO) because the people of Jacksonville are honest, hardworking folks who don’t need a law like this to tell them what is right and wrong.”

Conversely Midyette stated “the ideals of Jacksonville residents are probably best expressed in our laws and the HRO is really explicit.”People on either side of the issue are able to contact their district council member as well as the five at-large council members to express their sentiment on whether City Council should pass the new HRO bill.