The Six Feet Away Gallery Q&A 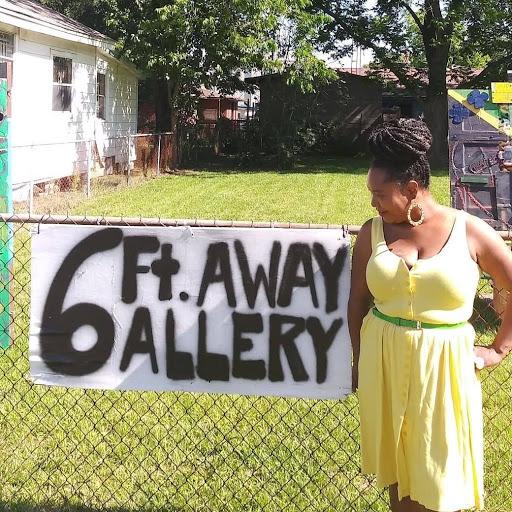 In the time of COVID-19, art spaces have been deemed non-essential. Museums and galleries have been shuttered for months and the vibrant culture those spaces help cultivate has largely been shuttered as well. With no clear timeline as to when business as usual may return for the art world, a local couple took the initiative to create a new kind of art space.

Enter the Six Feet Away Gallery. An outdoor gallery with art created by Roosevelt Watson III, curated by Shawana Brooks, and installed right in their front yard on Jacksonville’s Northside.

The Six Feet away gallery facilitates conversations with the artist twice a week, Wednesday’s from 1p.m. – 4p.m. and Friday’s from 4p.m. – 7p.m.

Spinnaker had the chance to chat with the dynamic duo about the nature of the Waymaker Series, the response the project has received and what words of wisdom they would offer to young people trying to ‘make their way’ in today’s climate.

Spinnaker: “First off, tell me a little about the Waymaker Series. What was the inspiration, what messages do you hope to convey to the audience?”

Roosevelt Watson III: “The Waymaker series is an ongoing body of work that I’ve been creating for around 5 years. The art centers on local African-Americans, and honors the legacy of their local and national contributions and their allies. The series includes many prominent figures whose awareness needs to be uplifted – Figures like James Weldon Johnson, Eartha White, Stetson Kennedy, and A.L. Lewis. I call it Waymakers because many of those fine people made a way out of no way which now provides a path for me and those who have similar life experiences. Most pieces are large scale assemblages to which I refer to as quilts. Quilts were used during slavery to communicate messages and I use symbols in my art to do the same. We joke it’s a lot! But this is why I enjoy talking directly to people about the artwork. It’s a big part of my process to engage in dialogue to use my life as that influence. I leverage myself in my artwork for difficult discourse around race relations. My art reflects the continued struggle for the Black community as they make a way out of no way by their courage, strength, and resistance. But we all need help to go forward in a more equitable society.”

Spinnaker: “Speaking of audience’s, how has the response been? Have you met many new people? Have your neighbors been on board? What has the general vibe been like during the gallery open hours?”

Shawana Brooks: “Since we started this on April 29th, it’s been nothing but love – Love from our neighbors and neighborhood. They regularly come by for a visit or if several visitors are over they’ve even been nice enough to offer their driveways for our visitors. The love from our city, and now our nation thanks to NPR Morning Edition, were unexpected but welcomed. We have had visitors from surrounding counties and even Tampa, Fl. The response to Roosevelt and his art has been phenomenal and proved why we felt it was necessary to put up art. We both are artists of our community and it was hard to be separated from everyone but we wanted to be authentic to our passions. As more people stopped by it was clear they needed this too-to talk-and being able to do that through art made the subjects come to life.”

Spinnaker: “The gallery isn’t just about filling the void where art spaces were pre-pandemic, you’re also using it as a platform to create space to talk about race relations and I think that’s amazing. Tell me about the response to that specifically. How has it been for you all, as a young couple with a new baby, to open space in your yard to facilitate these kinds of talks?”

Shawana Brooks: “In the beginning before I consciously knew what I was doing, I needed to create a cultural experience for our 22-month old. Since I am a curator, he was literally born into exhibitions and loves to explore art. With parks and cultural institutions closed, our backyard became my muse. I always wanted an artful backyard however I’m not great at landscaping. But once the art was up it made sense this was what we should do. We took our son around to view it and he was thrilled. Our neighbors love our son too and wanted to see what was making him so happy and it started from there.”

Roosevelt Watson III: “Our neighbors know we’re artists but had no imagery of what that looked like. Most of them haven’t gone to any of the museums or galleries where I’ve exhibited. It first was for a few of them their first time engaging with my art or an artist. Our neighborhood is predominantly black and seeing my art was about them opened their eyes to another form of expression.”

Shawana Brooks: “Since Roosevelt’s artwork is already about his life experience as a black man, the racial conversations were just a natural origin of him talking about what the work meant. It wasn’t like we were trying to implement that, but it was quite clear that with everything going on from quarantine a segment of the black population was experiencing inequities around health disparities and that was the main conversation until more racial incidents kept happening across the nation. Then his work became a conduit to keep those conversations flowing. To talk about those concerns and to see how others saw this as controversial. These are everyday topics in our home.”

Spinnaker: “Now that things are moving towards reopening do you plan to keep the gallery going? What is your vision for this (brilliant) concept?”

Roosevelt Watson III: “The series as of now has over 100 people and keeps growing. I learn of others from the stories people share on their visits. Civil Rights legend Rodney Hurst Sr. came by for a visit and it got me thinking of his mentor Rutledge Pearson and now he’s on the list. While I’m used to displaying indoors I have worked with public art. I have a few murals around the city so I’ve been active in the kind of discourse that happens when people see you creating outside. I like the blending of the two. My wife has helped to free my mind of needing walls-Well at least inside.”

Shawana Brooks: “We’ll leave it up in our yard as long as the community wants it. We are interested in extending the project into more neighborhood’s. And are interested in applying for a few grants to continue the gallery and of course Roosevelt’s work is ongoing. He’s going to be working with other artists while I curate the finished collaborations. I think it’s beyond obvious that there is a lot of work to be done on museums’ behalf when it comes to exhibiting black artists and truly amplifying their work -Even more when it comes to membership and recruiting black audiences. I’ve worked as the first curator for one of the largest public institutions. This isn’t my first time being a first, so I understand what access means and how art affects the community and what representation brings to an organization. I don’t think we can wait anymore. More safe spaces are necessary where we can utilize art for discourse. Putting their needs as black artists first.”

Spinnaker: “What would you say to college students about how they can use their art or their voices in this revived civil rights movement sweeping the globe? What do you wish someone had told you when you were a young adult?”

Shawana Brooks: “Your vote is your voice. Use it. Vote for candidates who are partial to your ideals and hold them accountable. Engage with others about what’s important to you and be an ally for those who need your support. Art can be a vehicle as you discern your passions. Be expressive and put that into your work. Don’t shy away from being your most authentic self. To be anti-racist is to choose daily introspection as a lifestyle. That choice can inform your process to find inspiration in critical conversations. It’s my belief that we all have something that can be used as a weapon of change. I wish someone told me that when I was younger.”

The gallery has a few upcoming events of interest:
Juneteenth; Understanding and Celebrating 155 Years of Freedom A Different Kind of Landscaping

Their website displays ways to get involved, reach out, and make contributions to support the work.